Extraordinary Popular Delusions and the Madness of Crowds: Financial Edition 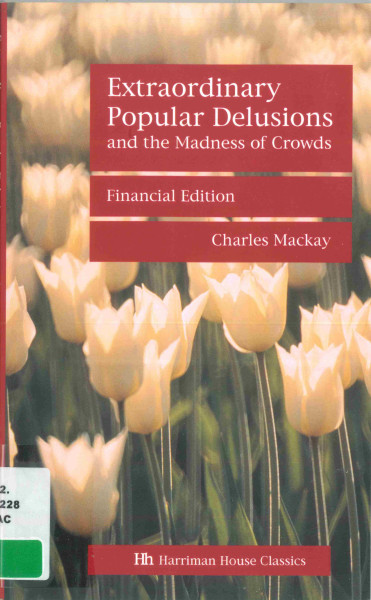 I am writing this review from the departure lounge at Toronto International Airport, as I await my flight to Munich. Prior to my trip to Finland, I chose to read a short book in the hope that I would have it read and reviewed before I left. That did not happen. While I did indeed finish the short 115-page book, it took me three days, and I had no time to compose a review. While I edit this review I am in Munich, awaiting my flight to Helsinki. My habit for arriving notoriously early for flights, and then having a delayed departure to Helsinki, may see this review go on-line before I get to Finland.

Extraordinary Popular Delusions and the Madness of Crowds: Financial Edition by Charles Mackay was first published in 1841 (without the subtitle). The abbreviated edition I read contained only the chapters in the original work dealing with economics and market psychology, and focussed on three infamous financial manias: John Law’s Mississippi Scheme, the South Sea Bubble, and tulipomania. I was drawn to Extraordinary Popular Delusions because of Tulipomania, which I had already read.

In both the Mississippi Scheme and the South Sea Bubble, people invested millions in stocks in the promise of reaping huge dividends. In the early eighteenth century, stocks were sold in France for the new trade opened up in Mississippi and Louisiana. At the same time in England, stock was sold in trading prospects in South America. The benefits promised fortunes, and people bought up. John Law, an economist as well as a notorious gambler, led the Mississippi Scheme. He was an irresistible salesmen, who even charmed French nobility:

“When fortunes such as these were gained, it is no wonder that Law should have been almost worshipped by the mercurial population. Never was monarch more flattered than he was. All the small poets and littérateurs of the day poured floods of adulation upon him. According to them, he was the saviour of the country, the tutelary divinity of France; wit was in all his words, goodness in all his looks, and wisdom in all his actions. So great a crowd followed his carriage whenever he went abroad, that the regent sent him a troop of horse as his permanent escort to clear the streets before him.”

The Mississippi Scheme, as with the South Sea Bubble, led to outrageous stock prices and sales went through the roof. Schemes were incredible and one wonders how people could be so gullible to invest in a scheme advertised as “carrying on an undertaking of great advantage; but nobody to know what it is.” History shows that such prospects cannot continue forever, and whispers murmured that all was not so stable. Some investors cashed out, and I was amused to hear of the cartloads of specie, or coin money, that were withdrawn. No smart investor wanted paper money payments, as coin was considered more tangible than paper money, and could be redeemed by melting it down. Banks soon ran out of specie, and when news started circulating that money had run out, people panicked. It was exciting to read of the rapid downfall of the stock prices. People were left destitute within hours. Stock prices fell so rapidly one was a millionnaire in the morning and a pauper by night.

Mackay only touched upon tulipomania. Ten small pages were devoted to this economic madness while fifty pages were spent on each of the prior schemes.