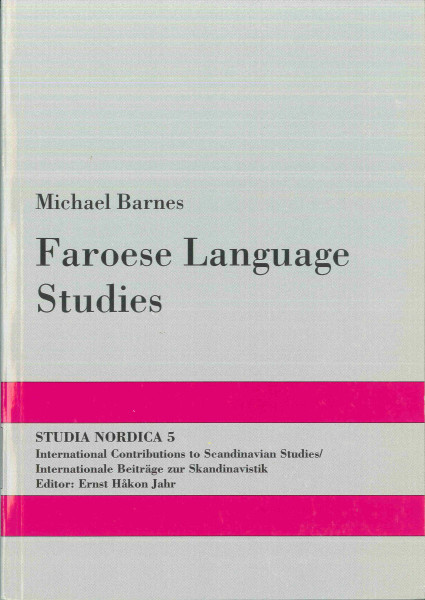 I picked up Faroese Language Studies by Michael Barnes at Akateeminen Kirjakauppa in Helsinki (I believe) fifteen years ago. It was during my trip to Finland in 2002, 2003 or 2004. In any case, it was at a time when the bookstore had a wide assortment of books in and about different languages. Now the foreign languages section is a fraction of what it used to be. I recall asking if they had anything in Faroese, and an employee found this for me in the back. It was not yet out on the shelves. It is a series of nine essays, all written by Barnes, about the Faroese language. I will be returning to the Faroes in two weeks and have been reading all the books I have about the islands that are heretofore unread.

Unfortunately I did not like this collection of academic dissertations. While I do have a linguistic background I seem to make the frequent mistake of choosing books like this to read for pleasure. There have been exceptions–such as the two academic dissertations I read about Tristanian English–but I don’t think anyone assembles essays like these with the intention that they will all be read cover-to-cover. I am not a doctoral candidate in linguistics, so some terminology went way over my head. How could I possibly derive a layman’s interest in a fifty-page chapter on the Faroese preposition fyri? So take this review with a grain of salt: I am an armchair linguist reading a heavy academic book cover-to-cover where a doctoral candidate might not even do so.

Barnes included essays written between 1981 and 1998. Only two struck my interest: “A note on Faroese /θ/ > /h/” and “Reconstructing language: the view from the Faroes”. The latter essay drew upon my knowledge about the creation of standardized written Faroese, which I had read about in No Nation is an Island. I read all the Faroese examples in the text and tried to understand the language without (eventually) glancing at the English translations.

My favourite bricks-and-mortar bookstore in the USA was Schoenhof’s, a foreign-language store in Cambridge, Massachusetts. I visited this store for the first time with dear Scrabble friends John and Kristen Chew in 2001. I squealed in delight and eventually calmed myself down long enough to decide upon a method of seeing the books in some kind of orderly system. On my first visit, the first book I decided to buy (among many) was An Introduction to Modern Faroese by W. B. Lockwood. This book, from 1955, was the first such analysis of the language in English, yet it had never been revised. Barnes stated multiple times in the body of his different essays variations of the following:

“As a teacher of Faroese to non-native speakers, I have naturally made extensive use of W.B. Lockwood’s An Introduction to Modern Faroese (1955). Though excellent in many respects, this is a pioneering work, and as is to be expected there is much in it that is imprecise, incomplete and occasionally even misleading. It would be gratifying indeed if Lockwood himself or some native Faroese scholar would undertake a complete revision of the book.”

Barnes lauds Lockwood for his early work yet does not want to appear to rip into him as he “revises” some of Lockwood’s themes in his own dissertations.

Since Barnes published this collection in 2001, other Faroese grammars, written in English, have appeared. This collection of essays should be read in conjunction with Lockwood.