I returned home from my trip to Finland six days ago, and it must be a record that I am now writing about the books I bought while over there. I normally don’t get around to writing about my books until months later. I think Mark leaving for a short trip to Halifax this morning had something to do with it. Ordinarily on Sunday I am on my way to his place by mid-afternoon. This Sunday I am writing my first instalment about the books I bought.

This was my eighth trip to Finland, so I no longer experience the initial thrill of stepping into a Finnish bookstore, although I did have to find my way around both Suomalainen Kirjakauppa and Akateeminen Kirjakauppa since both stores had changed their layouts since my last visit in 2010. I am sure I looked like a lost customer walking around in circles. I admit I was, but I didn’t want any help finding anything. I’d rediscover the stores myself. In Akateeminen Kirjakauppa, the ground floor magazine area on the corner of Pohjoisesplanadi and Keskuskatu had been taken over by a Starbucks, and the magazine area itself had shrunk to a fraction of its size.

During the summer of 2000, the best summer of my life when I lived in Helsinki specifically to study Finnish, I loved exploring Akateeminen Kirjakauppa. Sixteen years ago the language section was enormous. I would discover new books all the time. In 2000 the language section was in the place where the new nonfiction and Finnish war books are now. When I was last in Finland in 2010, the language section was where the Moleskine merchandise now is, and on the shelves around the corner on the left side of Moleskine. Now, the language books are hidden away in the back beyond the public washrooms. When I walked into Akateeminen Kirjakauppa for the first time in six years, I completely missed the language area. I still didn’t ask anyone where they had moved it; I just enjoyed the quest in finding out where it had been relocated so I had another look around. The language section is now housed in what used to be a staff area, not accessible to the public, so naturally I never even ventured that way. Only when I took a look further and saw that I could now go to this part of the store that I could never go to before did I realize that I had stumbled upon the language section.

It was exciting to be back yet also very disappointing to see such a reduced section. So many languages were no longer being stocked. It was sad to see piles of old metallic dividers stacked at the end, dividers that used to designate sections on languages they now no longer carried. In 2000 I used to look through this area for hours at a time, yet this time I looked at so many interesting books but found nothing that interested me enough to buy. I am glad I made a return visit on my last day in Helsinki a week ago today. I wanted to stop in again in case the store had a chance to restock while I was away for a week exploring Oulu, Ii, Joensuu, Simpele and the Russian border. I left quite happy with this: 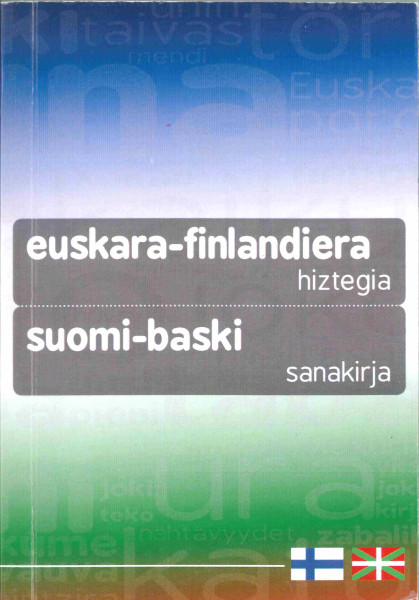 Euskara-finlandiera hiztegia / Suomi-baski-sanakirja is a pocket dictionary of Basque and Finnish, two non-Indo-European languages. A small middle section had pronunciation notes and some common phrases. Since I had read both of the books I had brought from home, I wanted something to read on the return flight. My flight from Helsinki to Munich was at 6 a.m. and I was not in the mood to read anything, but I enjoyed looking through these 8700 Basque and Finnish entries during the flight to Toronto.

During the summer of 2000 I was delighted to find this book at Akateeminen Kirjakauppa: 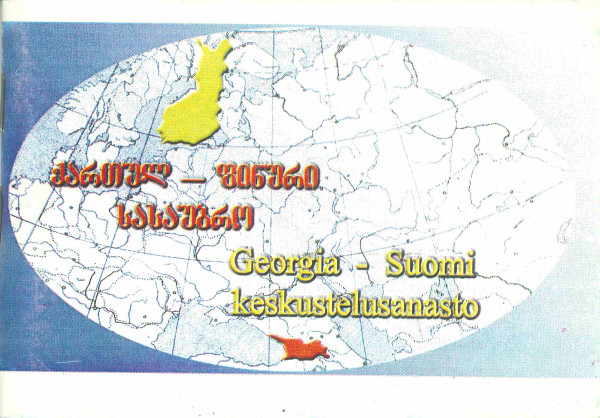 Georgia-Suomi keskustelusanasto, a Georgian-Finnish phrasebook. Georgian is also a non-Indo-European language. This book came out in May 2000, just a month prior to my time there. It also included pronunciations in transliterated Georgian. 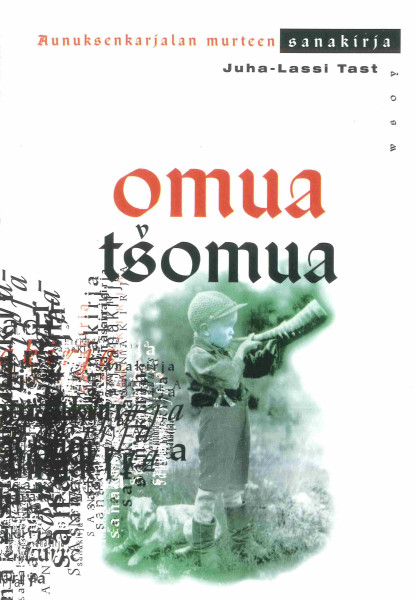 In the summer of 2000 WSOY, a Finnish publisher, came out with a series of pocket dictionaries focussing on regional Finnish. I found Omua tšomua by Juha-Lassi Tast in a second-hand bookstore on Korkeavuorenkatu in Helsinki. It deals with Karelian, from the Aunus or Olonets region. I would translate the title as Our beautiful land. At the same second-hand store I was thrilled to find: Amerikansuomen sanakirja: A Dictionary of American Finnish by Pertti Virtaranta. I had been looking at this book in the Tampere main library (Pääkirjasto Metso). It was published in 1992 in Turku and was no longer in print; thus no chance of finding it in any retail store. How does American and Canadian Finnish differ from the standard language? Answer: it is full of anglicisms, some of which are quite funny, such as äpyli, the Finglish word for omena ( = apple) and kyökkistoovi for keittiön liesi ( = cookstove). The dictionary is bidirectional. Ahem. I had first found Fucktionary: Englannin kielletyt sanat by Kate Moore and Tiina Tuominen at a bookstore in Ekenäs selling for full price (over 30€) yet paid less than a third of it when I found it at Suomalainen Kirjakauppa in Joensuu. The dictionary’s subtitle translates to The forbidden words of English. The entries are English-Finnish only, and I learned a lot of words and phrases in my own language I never knew before. Some of the entries are extremely graphic and rude; more than just translations of “gaydar” and “fucktard”. I am glad the authors supplied documented examples of each translated word or phrase.

That takes care of the language books I bought. Part 2 will focus on culture and history.