Here are the remaining books I bought (for myself) while in Finland: Whenever I visit foreign libraries I always look at the books they have on the local area, and I also see if there is a local history section. I was most impressed with the Joensuu main library and its large local history department, which naturally featured books on Karelia and its regional languages. In Ii, however, I was happy to find a single book, Iin kuva — Image of Ii by Mauri Hietala which was published by the Municipality of Ii in 2006. It’s a large square book of 160 pages of colour photos and captions in Finnish and English. My favourite section was on the Ii train station, and the sad story about the cancellation of rail service in 2006. Two well-worn copies were on the open shelves yet I found an immaculate copy in the local history bookcase. I asked a librarian if there was any chance I could still purchase the book. She brought me back to the circulation desk where she asked her two colleagues. They informed me I could ask at the municipal office next door. I was so glad I asked, because I found it for sale there for only 25€. I posted my receipt of purchase in an earlier entry. I would have translated the English version of the title as A Portrait of Ii, which still satisfies the photographic concept gleaned from kuva. I fell in love with Katajanokka / Skatudden by Lauri Putkonen the moment I saw it. This book, from 2010, is all about Katajanokka (Skatudden is its name in Swedish) which is a part of eastern downtown Helsinki. I love to walk around Katajanokka. I did this during my recent trip; the summer of 2000 when I lived in Helsinki; and I had the pleasure of taking Mark on a walk around, and up and down the streets of the entire island in 2010, Mark’s first time in Finland. The book I bought was the sole copy I saw anywhere in Helsinki, and it was a little beat up. So, in spite of my love affair with it I did not buy it (it was also pricy at 29€, which was a deterrent) and I left for my six-day trip to Oulu, Ii, Joensuu and Simpele. I endeavoured to find a pristine copy on-line but could not locate it anywhere. I just hoped the store where I found it still had it for sale by the time I returned. They did, and they told me they had no other copies. This was the last one. I am so glad I got it (fingerprints and dust jacket nicks notwithstanding). It was full of maps and plans of the original island pre-landfill; its Jugendstil buildings: 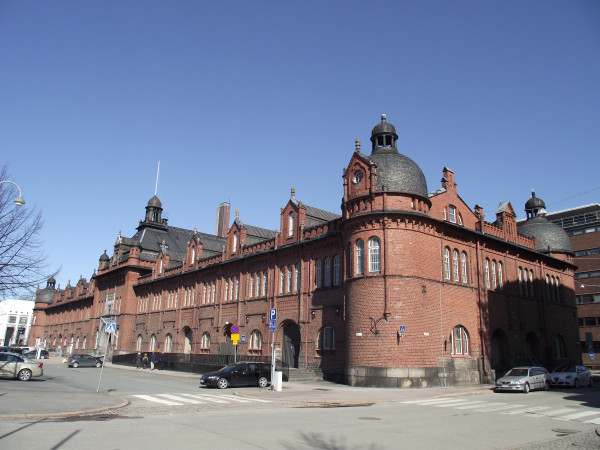 and a chapter on its airport, Finland’s first. Saamelaiset suomalaiset–kohtaamisia 1896-1953 by Veli-Pekka Lehtola is a very heavy 2012 book whose title translates to Sami Finns–Encounters 1896-1953. I saw this expensive book at Akateeminen Kirjakauppa and spent a good long time poring over it yet could not part with the equivalent of seventy Canadian dollars for it. On my last Saturday in Helsinki, on April 9, I visited a second-hand bookstore on Korkeavuorenkatu just north of Tarkk’ampujankatu. I found both Omua tšomua and Amerikansuomen sanakirja there, and was getting my fingers filthy looking at (and moving) piles of books on Finnish history. I enjoy looking through Finnish second-hand bookstores just to see what they’ve got, but after I saw Saamelaiset suomalaiset I specifically looked around for it in the shops I visited. As the clock ticked, I knew that I had to leave the store as I had a barbecue date at the home of my friends Tiffiny and Risto, and didn’t want to be late for the 2 p.m. start. I looked at one final pile of books by the cash desk. And there it was: literally on the bottom of a tall pile of oversize books. I couldn’t believe it; it was right out of a TV show in that the book I was specifically seeking was the bottom-most book in the last pile I looked at. It was in even better condition than the retail copy at Akateeminen Kirjakauppa and was only 20€. Plenty of black-and-white photos illustrate the 528 pages about the Sami people. World War II decimated northern Finland, and the Winter War and Continuation War saw the Sami go back and forth across the border as Finland regained then lost its land to the Soviet Union. I was also interested in the chapter on language politics from 1921-39. Also at the same hoarder house of a second-hand bookstore I found The Malvinas, the South Georgias and the South Sandwich Islands, the conflict with Britain by Laurio H. Destefani. This book was an Argentine perspective of the Falklands War. I thought it would be an interesting read. After the introduction is a short section entitled “The Malvinas are Argentine” and the names of the chapters and sections within the chapters are filled with anti-British propaganda. It felt like I was reading a North Korean account of the Korean War, slamming the American imperialist aggressors. At Global Music Centre in Helsinki I found Son vuäinn: Skolt Sámi leu-dd from the Kola Peninsula, which also contained two CD’s of songs sung in the Skolt Sami language, easily the most orthographically complex of the three Sami languages of Finland (which is the reason I am particularly fond of it). The book is a diglot with–get this–lyrics for all the songs in both Skolt Sami and English. The English translations included notes when lacunae were encountered. For example, one song referred to käällaǩi kamaga. Note the k with a caron. This translates to boots of reindeer forehead skin. English wouldn’t have a single word for this specific type of skin, so a note was inserted.