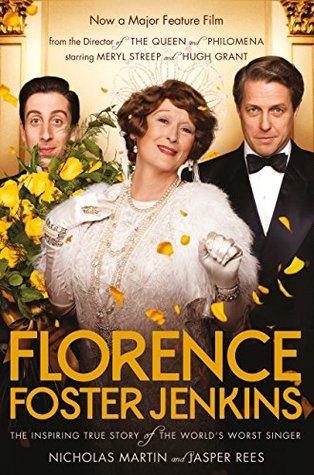 I rarely see feature films, but I did see “Florence Foster Jenkins” where Meryl Streep played the title role. I have known about this notorious singer since childhood, as she was always listed in the Guinness Book of World Records (which I read annually since I was about nine) under the category Singers. Her “world record” entailed:

“While no agreement exists as to the identity of history’s greatest singer, there is unanimity on the worst.”

That’s, surprisingly, quite a subjective statement from a source known for its objective argument-settling reputation. At least the book was worth reading under the McWhirters’ editorship. So when the new biography Florence Foster Jenkins: The Inspiring True Story of the World’s Worst Singer by Nicholas Martin and Jasper Rees came out, in tandem with the movie, I had to read it. First of all, in spite of the cover art, this is not a book adaptation of the movie. It merely capitalizes on it. While the movie concentrates only on Jenkins in her later years as a singer, Martin and Rees have told Jenkins’s story starting from before her birth. The authors have done their research into Jenkins’s family and birthplace history and provided valuable insight into the development of the woman known, and loathed, for her singing. They do not race through her childhood and time as a young woman. In fact, if the reader only wanted to read about her concert performances as a singer, he’d have to wait until the second half of the book.

While the juiciest parts of this biography relate to audience reactions and newspaper reviews of her concerts, I found her early life–she was married at fourteen–to be equally captivating. Her marriage to a doctor (a disaster doomed from the start if she was a bride at fourteen) and her troubles with her father’s will instilled in her a distrust of all authority figures, and not only doctors and lawyers.

Jenkins moved to New York City after she separated from her husband and ascended the vibrant social scene, climbing the ladder of high society at tea parties, afternoon dances and music clubs. Jenkins formed her own such club, the Verdi Club, of which she was the president, and sponsored and hosted many musicians and singers over the years. She was a skilful pianist in her own right, and performed at various clubs herself. Jenkins soon became a grande dame of the wealthy social set, and was well respected for her charitable work and for organizing concerts and benefits at her own club.

An arm injury prevented her from playing the piano at her club’s own concerts, and that could be the reason she took to singing later in life. The authors made a solid case for the late blooming of Florence Foster Jenkins:

“While it is conceivable that Florence’s stories of thwarted musical ambition were exaggerated, there are enough different sources which talk of her parents banning her from singing to confirm that, in later life, Florence at least believed she had been held back.”

Her repressive parents and husband hindered her creativity and Jenkins could never break out on her own until they had all died. This psychological straitjacket now removed, she could do whatever she wanted and had the money, her own music club as well as subservient friends to help her along. As long as the Verdi Club’s members were partaking of their president’s extravagant concerts and parties, the least they could do was indulge her if she decided to take to her own stage:

“Thus the cycle began: in return for her vast social and cultural largesse, Florence received uncritical approbation for her singing.”

None of her close friends dared laugh or tell her how awful a singer she was. To do so might have meant instant banishment from her club and being blacklisted from the New York social scene. So people sat through her concerts by grinning and bearing it:

“It was very difficult for anyone to tell her the unvarnished truth: not Verdi Club membership, not the many opera singers launched upon New York thanks to Florence’s patronage, not charities who profited from her fundraising, not journalists (real critics being uninvited), certainly not St. Clair [Bayfield, her common-law husband]. In whatever spirit they were offered, Florence chose to believe every compliment and accept every invitation.”

Her disdain for authority figures carried over towards journalists. She dismissed any critical reviews of her singing and recordings as being from uneducated uncultured heathens. No one knew opera as well as she did and her critics were not in any position to judge her.

Sadly, her distrust of lawyers had a devastating impact on her common-law husband St. Clair Bayfield. Since Jenkins died intestate (the authors however claimed that she did in fact have a will) Bayfield could not inherit. Jenkins died in 1944 and common-law spouses who did not even share the same residence had no legal standing. Therefore Jenkins’s estate went to her next of kin blood relatives: all twenty of her second cousins. Bayfield managed to prove in court a common-law relationship and was awarded only a fraction of her estate.

Her accompanist, Cosme McMoon, was known to laugh while playing for her and hamming it up for the audience. His testimonials about working for Jenkins are known to be exaggerated, however the few (soundless, thankfully) movie clips that exist of Jenkins in concert prove his point:

“‘She added histrionics to every number.’ recalled Cosme McMoon, ‘generally acting the action, if it were an aria, or other appropriate action if it were a descriptive song, or else she would go into different dances during these numbers, which were extremely hilarious.'”

“the audience nearly always tried not to hurt her feelings by outright laughing, so they developed a convention that whenever she came to a particularly excruciating discord or something like that, where they had to laugh, they burst into these salvos of applause and whistles and the noise was so great that they could laugh at liberty.”

Jenkins would often break out of song and acknowledge the applause, bow and catch a few breaths, and then resume singing. Jenkins recorded nine songs on 78 rpm and all of them are available on CD. I own one such CD and can attest to her need for frequent inhalations. She could not see her own need to draw breath mid-song, yet the listeners could:

“And if others could not be relied upon to sing her praises, Florence sang them herself. In one Verdi Club programme she wrote, ‘[Luisa] Tetrazzini took three breaths to sing this phrase, I do it in one.’ A woman at a recital begged to differ: ‘She did it in twenty-four.'”

The line that bowled me over and continues to do so upon subsequent rereadings is the reaction of audience members who did not have to act so sycophantic:

“Verdi Club concerts were free to the members but tickets could be bought by the public, which meant that audiences soon started to swell with non-loyalists who had never been to a Silver Skylark ball or a Rose Breakfast. Word spread in the early 1930s about the unique phenomenon of the singing president. In 1934 the audience contained a rogue element who paid $2 for a guest ticket, made their way to the back of the auditorium and laughed their heads off.”

Jenkins’s common-law husband sums up his wife’s talent quite succinctly:

“The recitals acquired a cult popularity. In St. Clair’s estimation this was down to what he called her ‘star quality’…’There is something about her personality that makes everyone look at her with relish. That is what my wife had.'”