Mark and I drove to Fort Wayne but stopped off in Toledo, Ohio first. We covered six states on this trip: Michigan, Ohio, Indiana, Kentucky, Pennsylvania and New York. It was my first time in IN and KY. When we checked in at the Grand Wayne Convention Center I chose a set of blue tiles and picked up my new editions of the Official Tournament and Club Word List. I was happy to see that the new edition was much thicker than the old edition, due to the more durable quality of paper versus solely on the number of new additions. During the evenings of the tournament we christened my new edition of CatchPhrase, which I had bought in Florida in February of this year. It is always fun to play this game with a large group and on the second night we played it we had eight people. There were spectators gathering in the Courtyard by Marriott wanting to join in. We could have played much later if we all didn’t have to get up for 9:00 games the following morning.

I have included my bingo count for each round. My bingos are listed first, separated from my opponents’ by a virgule.

[1] Both blanks were used by me in my penultimate play, ZeROs, which scored 64.

[2] A coincidence that SILkIES was played in Round 18 and SILKIeS in Round 20.

[3] If I had played my second bingo without a blank, it would have been DANEGELT. Lowercase ells make some bingos look like spelling errors.

[4] If I had played my first bingo without a blank, it would have been HAGGLER. 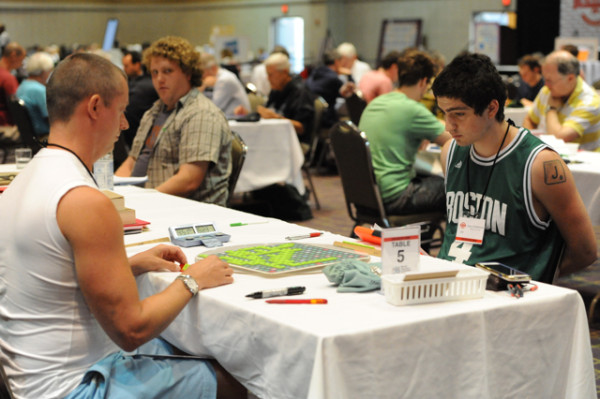 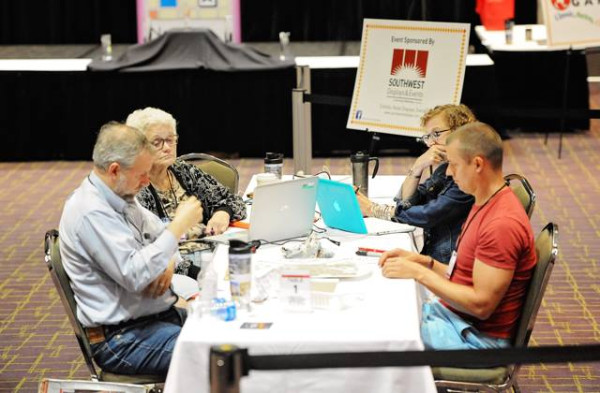 Playing at Table 1 versus Ian Weinstein in Round 21