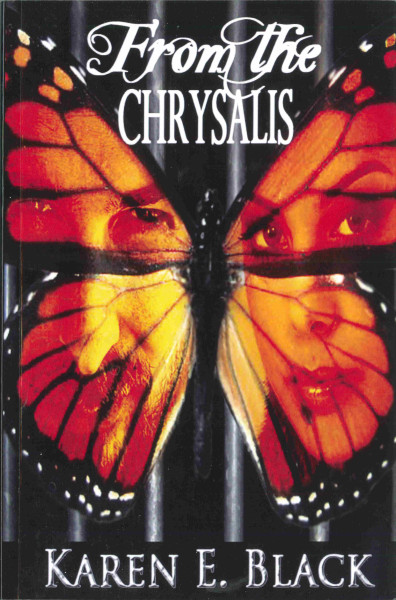 It is the unfortunate state of self-publishing that authors forgo the time and expense of having their works properly edited. No printed work, whether by a large or small publishing house, or even a self-published endeavour, should escape editorial scrutiny. To leave a work unedited only does the author a disservice. How could Karen E. Black, the author of From the Chrysalis, not have thoroughly reread her manuscript–or have had someone else do so–before sending it to print? Based on the superabundance of errors I found in the text, a reader will blame no one else but the author for those mistakes. The editor or the printer will escape criticism because it is the author who is always the focus. Was Black in so much of a rush to get her book to press that she thought errors be damned (it’s not as if anyone would notice anyway). That I chose to talk about the mistakes in the text of From the Chrysalis before commenting on the story and writing style tells more about the sorry state of my personal reading experience. I have not encountered more errors in a printed work since My True Hidden Hollywood Story (also a self-published work) by has-been soap star Brenda Dickson. Dickson and her lawyers are still threatening to sue me for my Most Helpful Customer Review on Amazon.com. Imagine that–my one-star review is both the top customer review as well as the most helpful. How often does that happen on Amazon?

The novel told the story of two cousins, Liza and Dace, who are lovers. The love story is cut short as Dace is incarcerated for manslaughter and Liza gets shipped off to Ireland. Black gives us no opportunity to get to know her characters. A little history is needed to explain the taboo love affair of two first cousins. Am I the only reader to wonder why cousins? I mean if you’re going to start the story by writing about the skinny-dipping escapades of two close relatives, I think it’s reasonable to build up the characters to show how their passion developed. The story starts in 1966 in Ontario, not 1866 in Utah. I am certain that cousin-cousin sex was just as much of a taboo fifty years ago as it is now. So why did Black choose to make Liza and Dace cousins after all? I felt that the cousin attraction was never explained.

Plot developments unfortunately do not develop over time. Instead, all of a sudden, stuff happens. We are left with no antecedents. I can however appreciate the subtlety of suggestion; Black delicately hints that Liza got pregnant and had an abortion from an older man she met in Ireland. However I expected more detail than just a subtle note. We are led to read between the lines that Liza had an abortion–but in Ireland in the early seventies? An illegal one, I suppose. Or did Liza go to the European continent for this abortion? I can even leave this entire, although major, detail alone if it provided some subsequent consequence, like aching regret or gnawing pangs of sorrow over terminating the pregnancy. Yet this was typical of the text: more time was spent on innocuous details like the lunches Dace and Liza ate in court and not enough about really big events like a pregnancy and abortion.

Dace is drawn into a prison riot, and then gets involved in dealing drugs in a biker gang. The dialogue was wholly unbelievable. I could not imagine jailed men or tattooed bikers uttering most of what Black put into their mouths. Even the dialogue between Dace and Liza was contrived. I could not imagine any young woman–even a PhD student in literature–tossing around so many literary references to her ex-con-sanguineous lover and expect him to understand the literary significance. One quote from Dace in particular:

“Looks like it’s not enough that I’ve made you totally wanton, you’re a little crook now, too”

would never have come from a prisoner’s mouth. Wanton–who would ever use this word? And even if Dace knew what it meant to insert it into casual discourse with his girlfriend, I would expect he would have an enhanced vocabulary, one that would know the meaning of lugubrious. Liza says:

“Nice word. I can almost see what it means, but talk English next time, smarty pants.”

While some anachronisms occur, in reference to the release dates of two films (discussed in the errors notes at the end), the most striking anachronism occurred during an episode that took place during the summer of 1972. The following quote was made by Dace to Liza:

“Although I gotta tell you, she looks like she’s one tough lady. Kind of like Margaret Thatcher.”

In 1972 Thatcher was serving in the Conservative cabinet as Secretary of State for Education and Science. How would a former jailbird like Dace know who Margaret Thatcher even was, unless he was a nut for British politics? Thatcher’s term as British Prime Minister started in 1979, the year the rest of the world (aside from Britons) first found out about her, including media-deprived con men.

A work that has been poorly edited unfortunately overshadows everything else. I as the reader genuinely wanted to be entertained by this story and I looked forward to reading Black’s work, as I am already a reader of her blog. Yet as I pore over all the entries in Black’s blog, I must wonder: was From the Chrysalis edited already? Black writes:

“Whatever–CreateSpace has been great. I’ve used their templates to create a paperback version of From the Chrysalis at virtually no cost beyond the money I had already spent [for one thorough edit by Genevieve Graham, author of Under the Same Sky etc.].” The bracketed comment was included in the original quotation.

In spite of the cringing–and I cannot overstate the amount of wincing I did as I turned each error-ridden page–I am optimistic about Black’s second novel. Although I was not a fan of From the Chrysalis, I do look forward to reading its sequel, Feeling for the Air, for on Black’s blog, she wrote:

“Getting Feeling for the Air professionally edited really gave me the boost I needed. A big thank you to award winning Can Lit novelist Diane Schoemperlen who is also a meticulous editor and knows a thing or two about a prison town and the Canadian penal system. I still can’t believe she had the time and energy to check my manuscript for plot implausibilities, missing words, consistency in spelling and font styles and the occasional misuse of lie/lay.”

Maybe Schoemperlen also taught Black a few tips on the correct usage of hyphens; two are missing in the above citation. But still. The one redeeming part of From the Chrysalis was the prison escape, and I raced excitedly through the final pages. It was these final suspenseful chapters that made me want to read Black’s next novel. She infected me with a bug of curiosity: will Dace be captured? How will Liza cope? I am optimistic that Feeling for the Air has improved with the input of a star editor at Black’s side.

I as a reviewer take notes while I read (as one should). When the list of mistakes grew so ashamedly long I thought that I might actually be doing a service for future imprints if I included them all, with page references. Easy to see and correct when they’re staring right at you. Emphasis in the quoted passages is mine:

“…a rather complicated looking recipe for Veal Cordon Blue.” (p. 24). Aside from misspelling bleu, I could not understand the reasons for such erroneous capitalization throughout the text.

“Her grandmother stood in the doorway, the jam of it just above her head.” (p. 29). The word should be jamb.

“It was that way with the Guardai in Dublin, anyway.” (p. 55). The proper spelling is gardai.

“A single letter with a New York postage stamp…” (p. 68). I believe Black intended to say postmark, as individual American states do not issue their own postage stamps. I can see, however, how one might interpret the term postage stamp as an ink mark with a date and place name indicator, yet the more common meaning for postage stamp is the valued perforated piece of paper with a gummy back you licked. I could see the ink cancellation indicated as a postal stamp, or a postal stamping, but not as a postage stamp. The term though is postmark.

“She fell asleep rereading Wuthering Heights, having remembered to double-lock her door before she laid down.” (p. 86). Oh my–this is a doozy. Should be “before she lay down.”

References to both dinner time and summer time as adjectives, instead of writing them each as single words (p. 86). Oddly, Black did spell summertime as a single word in adjectival context on p. 210.

References to Maitland Penitentiary’s Recreation Hall and its recreation room–different names for the same place as well as erroneous capitalization, both found on p. 90.

“but Dace also ached for what for what his friend had so recently enjoyed…” (p. 134)

“…so thirsty he could have drank toilet water.” (p. 160). The standard past participle of drink is drunk.

“The paper boy, a young man with a loud singing voice…” (p. 180). Some of Black’s erroneous spacings between words provided comical relief.

“…they was confident these men were not only the ringleaders…” (p. 246)

“Only two of thirteen cases had been heard and unfortunately D’Arcy Devereux’ had been one of them.” (p. 280). I do not understand Black’s choice of indicating possession here, which she uses throughout From the Chrysalis. There is no good reason ever to leave off the apostrophe S in this case. While I can see why some writers leave off the S when the terminating X sounds like a sibilant (for example, by writing Max’ book instead of the correct form Max’s book), it is still wrong. Even more glaringly so when the terminating X, as I presume it is in Devereux, is silent. Don’t get me started on cases where terminating S’s are themselves silent, as in the name Jacques. What would you write, Jacques’s book or Jacques’ book?