Frost On My Moustache: The Arctic Exploits of a Lord and a Loafer 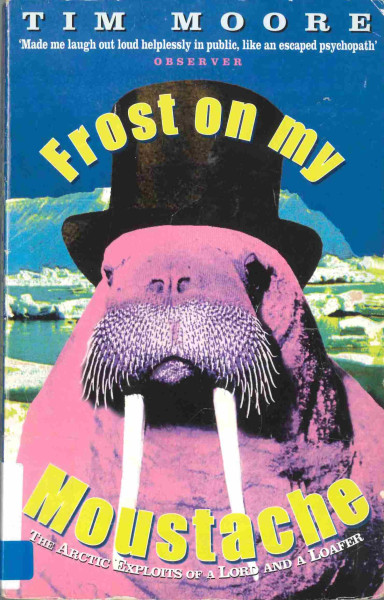 Frost On My Moustache: The Arctic Exploits of a Lord and a Loafer is Tim Moore’s a hilarious laugh-on-every-page account of his Arctic adventures. His trip from England to Iceland, then to the Faroes, Norway, Jan Mayen (almost) and concluding in the Svalbard archipelago was not a voyage chosen at random. Moore decided to mirror the exploits of Lord Dufferin, who is known to Canadians as our third Governor-General. Lord Dufferin explored the north Atlantic in 1856 and published his own amusing travel tale, Letters from High Latitudes. Frost On My Moustache can be looked at as a modern-day Letters. Moore kept me laughing, and since I had been to many of the same places, I felt a degree of familiarity that only made me laugh more.

Moore spent most of his nine-week adventure in Iceland. I am planning a two-week trip to Iceland this summer, although I did spend an entire day in Reykjavík in the summer of 2013, so the references to the capital city were still fresh. What I found most interesting though was Moore’s cycle trek across the country. Roads suddenly disappeared and he was left bouncing his tires over rough lava, worrying about getting a flat. His observations about the perils of the outdoors sounded both serious as well as downright hilarious:

“What heightened the senses was the complete absence of warning signs, fences or barriers. In Iceland, a healthy respect for the nation’s geological and climactic [1] extremes is taken for granted. If they went around trying to signpost every danger the nation would be bankrupted. ‘Warning–enormous hidden hole in ground’, ‘Danger–no shops or petrol or any living thing for miles and miles–oh yeah, and you just fell into a geyser’. That’s what Iceland is about–confronting the elements, and man’s puniness beside them. Don’t look where you’re going in the English countryside and you tread in a cowpat; here you disappear into a glacial crevasse. Get lost in the English countryside and you miss last orders: here you freeze to death up an unknown mountain and have the trolls pick at your bleached bones for a millennium until an earthquake affords you a proper burial.”

British-born and well familiar with imbibing a good pint at a pub, Moore nonetheless was taken aback by the degree of drunkenness he saw throughout the entire length of his travels:

“In my nine weeks away I saw more deeply drunk people–people with no control of their necks, people arguing with seagulls, people so dangerously wayward that everyone weaved out of the way and stared back with horrified intrigue in the expectation that they’d imminently fall off a quay or steal a tram–than I think I’ve seen in the previous ten years in London.”

Although married to an Icelander, Moore still has difficulty wrapping his tongue around the Icelandic language. He can never pronounce the name of the town Höfn correctly, despite numerous attempts. After failing to make himself understood in Icelandic, Moore drew the following conclusion:

“Scandinavians are so good at English that they even have two names for their own towns–one as pronounced by the natives, the other by idiot tourists. They are not programmed to deal with the possibility of an idiot tourist attempting the native pronunciation. I was rather taken aback, for instance, to hear that the correct Norwegian pronunciation of Oslo is actually the reasonably hilarious ‘Oooshloo’. but, on the single occasion I tried that out, the woman at the ferry terminal in Bergen gave me a leaflet about Newcastle.”

His olfactory perceptions of Höfn left much to be desired:

“Icelanders often tell you that their fish doesn’t smell. Only fish that is rotting smells, as it were, of fish, and theirs is all too fresh. Unfortunately with regard to this maxim, the whole of Höfn stinks like a smouldering, month-old whale carcass.”

I discovered Frost On My Moustache while researching the north Atlantic Norwegian island of Jan Mayen. There is not much written in English about this small island. I would love to visit this isolated volcanic drop in the ocean yet the only way to get there is by military plane. Norway does not permit independent travel to Jan Mayen and tourists, who have extremely limited opportunities to do much on Jan Mayen as it is, must receive official government approval. Even if you have jumped through all the required hoops, Mother Nature can thwart all travel by her tumultuous seas or rough winds. Unfortunately Moore’s plane had to return to Bodø, Norway on account of bad winds, although he did manage to see the volcanic peak through the clouds. By coincidence Lord Dufferin could not land at Jan Mayen either, so Moore was truly following in the lord’s footsteps.

That both attempted visits to Jan Mayen were thwarted was fitting, for throughout Frost Moore tries to out-Dufferin Lord Dufferin, yet never really feels he succeeds in outranking the big guy. The abruptly cancelled landing on Jan Mayen showed that he could never surpass his predecessor in feats of bravery or fortitude. Moore was plagued by seasickness and could only wonder if the lord suffered as much as he did. The nausea cast a doom of always being second best:

“They called lunch, and I was forced to concede that though I’d paid for the food, turning it down was probably preferable to throwing it up.”

Moore’s travels end in the Svalbard archipelago, the main island of which is Spitsbergen. While I was in northern Norway in the summer of 2013 I bought a large travel book on Svalbard as well as an enormous map. One day too I would like to explore the eightieth parallel. During his time on these islands Moore always had to be on alert for polar bears and often lagged behind his much fitter exploration team. Frost painted some gorgeous images of the north, and the picture I liked best was Moore’s description of icebergs scattered across the fjord:

“Anyway, everyone got their polar bears in the end, the captain having got into the what-the-hell spirit of Spitzbergen by nosing the Nordstjernen right up to the foot of the Prince Albert glacier through a lethal fleet of car-sized bergs which boomed against our flaking, dented hull with disturbing regularity. The whole fjord was sprinkled with smaller shards floating motionlessly on glassy water, twinkling in the garish 11.45 p.m. sun. It looked like someone had dropped a chandelier out of an airship.”

I like a laugh-out-loud travel tale that I can’t put down. I burst out laughing many times while reading this on the bus. Frost appealed to me even more because I could compare notes with Moore since we took similar trips. Perhaps I will make it to Jan Mayen and out-Dufferin them all.

[1] shouldn’t it be climatic extremes?