Fruits of Apartheid: Experiencing ‘Independence’ in a Transkeian Village 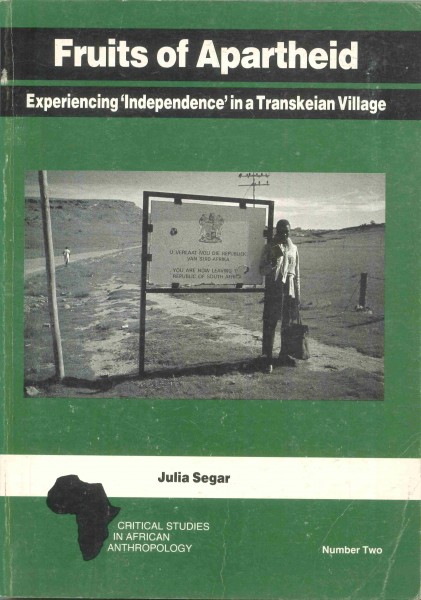 I bought Fruits of Apartheid: Experiencing ‘Independence’ in a Transkeian Village by Julia Segar when I was in Cape Town in 2017. Transkei was the first South African bantustan to achieve independence in 1976 and Segar attempted to find out what this meant to the average Transkeian citizen. Although not published until 1989, Segar conducted her research in the village of St. Paul’s during a six-month stay in 1983-84. The author wanted to write a readable academic study yet only achieved this after the sixteen-page introduction wherein she discussed the philosophy of various anthropological approaches. I did find her book readable, unlike most academic studies which aren’t written to attract an audience of pleasure readers.

When Transkei was granted independence of South Africa, what did this mean to the Transkeians? Segar wanted to find out from the people herself, doing away with propaganda news releases and punchy speeches from the new administration telling only of prosperity and greatness. She had a trusty interpreter, a Mrs. Mokoena (who is featured throughout the book yet whose first name we never come to know) who could communicate with the residents and to whom they could reveal their truths, until the time when they could gain the trust of Segar herself.

Segar spent an entire chapter on the Transkeian ennui of powerlessness in the face of authorities. She found out that since independence, nothing got done without a bribe, and that the apartheid regime was less corrupt:

“It is impossible to generalise from the case of St. Paul’s to the whole of Transkei, or even to the rural areas in general. However, the evidence from the village does call into question some of the broad macro perspectives. For example, Stultz’s notion that Transkei’s ‘half loaf’ is better than nothing at all and that at least now Blacks within Transkei do not have to suffer the degradation and humiliation of apartheid, is certainly not borne out by the testimony of the majority of St. Paul’s villagers. For them, ‘independence’ has not meant an increase in dignity, or even as Stultz suggests, that their lives have remained materially unchanged. Nor have they perceived the economic and political opportunities that Butler et al see flowing in the wake of ‘independence’. The ordinary villagers’ view is that a handful of privileged members of the ‘high rank’ live in relative luxury, while their own positions have worsened since 1976. It is difficult to argue that ‘independence’ has brought Transkeians more self-dignity, when daily they have to face problems such as who to bribe for a pension or a work contract.”

When faced with their present situation, Segar found out that the Transkeians of St. Paul’s much preferred life prior to independence. I acknowledge that out of context the two passages below favouring white rule can seem alarmingly pro-apartheid:

“In comparison with the contemporary situation, villagers feel strongly that their past life ‘under the Whites’ was far preferable. They pointed out that in the past, maintenance of facilities like dipping tanks and schools was far more efficient, and that White officials were more impartial in the settling of disputes and in the dispensation of justice.”

“They spoke of pre-‘independence’ days as a period of justice, fair play and harmony and of Whites as people who display qualities of generosity, mercy and kindness. Even the presence of the SAP roadblock is blamed on the Transkeian government, rather than on the South Africans. As one old man put it–‘with the South Africans we were not required to carry so many passes (sic) which are useless. Now we have to have a passport, book of life and a dompas and they all cost money’.”

The government under Prime Minister Kaiser Matanzima was more like a fiefdom that served the elite and trampled over the rights of its citizens who lived in poverty. Increased levels of taxation left the majority poorer–with nothing to show for it–while those in power revelled in luxury.

As the homelands were created on racial or tribal lines, the mass forced migrations of black South Africans into these regions only created rivalries between groups. After independence when whites couldn’t be blamed any more, who would Transkeians turn to but the new “other”, the black minorities (or majority) within their land? Segar discussed the consequential increased practice of customs and rituals, long dormant in black South African society. With the proximity of two tribes, the Xhosa and Sotho, one expressed one’s individuality through one’s unique customs. Thus one positive outcome of the homelands policy in Transkei was the revival of tribal culture.