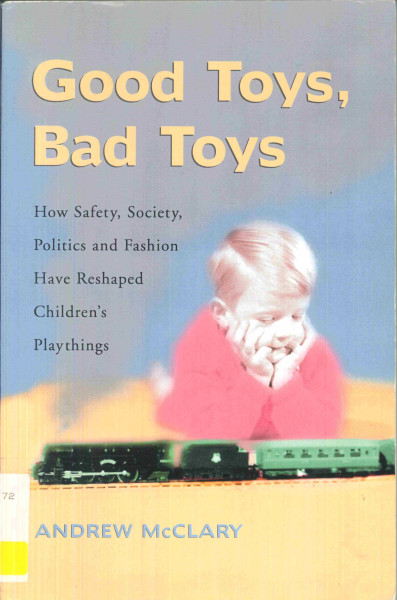 Good Toys, Bad Toys: How Safety, Society, Politics and Fashion Have Reshaped Children’s Playthings by Andrew McClary was a brief (180 pages) trip through toy history yet despite the book’s title, the author focussed more on the bad and very bad playthings that have found their way into children’s playrooms. Chapters dealing with racist toys and hazardous toys were the most interesting. The book was written in 2004 yet only touched on electronic toys, which by 2018 seem to have evolved into modern-day babysitters as parents supplant themselves with an iPad (which now come in indestructible toddler-friendly holders). I suppose that the introduction of television caused the same degree of consternation as parents took a backseat to their own responsibilities raising children.

McClary also dealt with toy weapons, the history of Barbie and her influence on young girls, educational toys and toys that are created with a certain gender bias. He always presented excellent cases for both sides of the issue and backed up his remarks with voluminous endnotes. I learned a bit about X-ray technology and its limitations:

“When they choose a material that is [to] be used in a new toy, toy designers must ask themselves what problems will arise if the toy is misused. No matter how carefully they are watched, toddlers will swallow things like small plastic toys. But plastic does not show up on x-rays, making the location of a swallowed plastic toy almost impossible to find. In 1979, the Mattel Toy Company found a way to mix barium sulphate with plastic, which would make its plastic toys visible to x-rays. Mattel gave the formula to a hundred other toy companies. As one executive said, ‘It is not competitive information.'”

I took issue with one of his comments about Christmas traditions, namely:

“Decorating the tree (which is more and more likely to be artificial today) is most commonly done on Christmas Eve.”

Granted, my best friend in grade two and his family always put up their Christmas tree on Christmas Eve (and took it down on Boxing Day) but even then, 45 years ago, I would say that decorating one’s Christmas tree on December 24 was extremely uncommon. I rank as uncommon on the other end of the time spectrum, putting up my own tree in mid-November.

In the chapter on hazardous toys, McClary recalled an episode from his own childhood:

“Should parents do more than merely watch for labels? Might that be only a first step, part of a much wider responsibility? What if most toy accidents were due to careless play rather than to faulty toys? If so, should not a parent be responsible for safe play on the part of a child? Many years ago, this was simply taken for granted. I remember when I was a boy of four, playing with a small metal airplane. My brother and I were upstairs in the family’s summer cottage, while the rest of our family was way down on the beach. As I swung the toy around, it bounced off my twin brother’s head. I thought no more of it until I saw blood streaming (or so it seemed to a four-year-old) down my brother’s face. Terrified, I ran down to the steps, shouting, ‘Bloody murder! Bloody murder!’ Needless to say, my family raced upstairs, saw what had happened (not much really), put a Band-Aid on my brother’s head, and gave me a stern lecture on toy play, accompanied with removal of the offending toy from my possession. Today, the end result would probably be anger against the toy company for selling a dangerous toy.”

His point about parents forfeiting their role as child monitor is well noted. He is correct in stating that there is always something about every toy that could be used inappropriately and which might case harm to a child. No toy is 100% injury-proof. I recommend that readers view a 1970’s “Saturday Night Live” skit with Candice Bergen and Dan Aykroyd. Bergen played the host of a consumer advocate TV show which featured Aykroyd as a shifty toy manufacturer. She exposed various hazardous toys Aykroyd’s company produced, such as bags of glass shards and dolls equipped with retractable switchblades. You will die laughing at it all.