Mark and I headed to the small Akureyri airport on the morning of July 2 to fly to Grímsey, a small island 40 km north of mainland Iceland. We got there at 8:00 for an 8:30 departure. From what we could see, there was no security process of any kind; passengers would just check their bags and go directly to the departure “lounge”, which was a small area of tables and chairs right next to the check-in counters. I feared when we woke up that our flight would be cancelled since the fog was so low. Before our departure two earlier flights took off as scheduled, to Nuuk, Greenland and to Reykjavík. An announcement informed the six Grímsey passengers that the flight was delayed, so we hung around the airport till the next announcement at 9:00. When that announcement said the same thing, we could only wait and I took out the laptop and composed a travelogue. The next weather update was at 10:10 and the news was the same: the weather was so bad at Grímsey that planes could not land there. We had to wait until after noon for the next update. When we realized we had to wait over two hours we decided to go back to the town and then we returned to the airport at 12:00.

The news was the same: no flight to Grímsey and the next update wasn’t until 2:30. An airport worker said that in spite of the next scheduled update, the chances of flying to Grímsey “were nil”. So I got a refund on the airfare and while we were very disappointed that we wouldn’t be spending a full 24-hour day plus seven hours on the island, we still could travel there the next day by ferry. Although we wouldn’t get to spend the night on the island and have all that time to explore, at least we would get there and have four hours before the ferry departed. We did not want to rebook our flight for the following day lest it was cancelled again.

And on Friday, July 3, the flight to Grímsey was indeed cancelled. We were glad that we decided to take the ferry instead. We headed to the Sæfari shipping office in the nearby town of Dalvík, 41 km north of Akureyri, that morning to buy passenger fare. The tourist office in Akureyri said that the ferry had plenty of room and that there was no need to buy tickets in advance. Mark and I thought nothing of it, and decided to get our tickets minutes before departure.

That was a bad idea. When I walked into the Sæfari office at 8:30 Friday morning, half an hour before the ferry’s departure, I was told that there was only one spot left. The ferry had a capacity for 106 passengers and there was only one remaining spot. My heart sank. We weren’t going to make it to Grímsey after all. After a little bit of pleading, the clerk said we could hang around the boarding deck to see if there were any cancellations, but he was not optimistic. Then Mark made the most generous proposal by saying that I should buy the last ticket and he would not go. I never considered going without him. Yet Mark knew how much I wanted to go to Grímsey, and that since I had the chance–just barely–I should take it. So I bought my ticket to Grímsey and when it was time to board I hung around the boarding area next to the guy checking passenger names to see if there were any passengers who weren’t coming.

I should state now that Mark and I already did have ferry tickets–but for the return voyage. We had originally planned to fly to Grímsey and then take the ferry back. Thus our plan was to arrive at 9:00 a.m. Thursday and depart by ferry at 4 p.m. Friday. Having return tickets is useless if you can’t even get to the island.

A tour bus of seniors arrived, and the tour leader spoke to the ticket agent, informing him that there were six members of his group who were not able to make it. I felt like rejoicing, knowing that Mark would make it after all. Yet I was cautious; I had to ensure the ticket agent that Mark was officially the next one on the waiting list. By that time a small crowd had gathered on deck, seeking last-minute tickets. The agent however was aware of the waiting list order and Mark was able to come with me to Grímsey. When the agent asked the people on the waiting list to come onboard, I had to yell to Mark, who was not waiting by the ship. I asked if I could run out and fetch him. I was so happy when he boarded that I was close to tears!

The ferry left at 9:10 and it was a very rough passage. I have never been on a ship with more seasick passengers. I already wrote about this in an earlier post. On my voyage to and from Tristan da Cunha, there were some seasick passengers as the south Atlantic is notorious for being rough, but this was even worse. Fortunately neither Mark nor I felt ill and we even played two games of Scrabble during the three-hour voyage.

During my packing for this trip, I considered whether or not to bring gloves. I decided not to–it was the summer after all, and I’d been to Reykjavík in the summer. I didn’t need them then, so I decided not to bring them. Our hands froze on the ship and while we were on Grímsey. It is cold in the Icelandic north in July. We decided when we returned that we would buy gloves, we finally got them in Egilsstaðir on July 6. As I post this message, it is after 1 a.m. on July 7 and we are in Höfn, and will explore the Vatnajökull glacier in the morning.

More instalments about our unbelievable trip to Grímsey will follow. Here are a few photos: 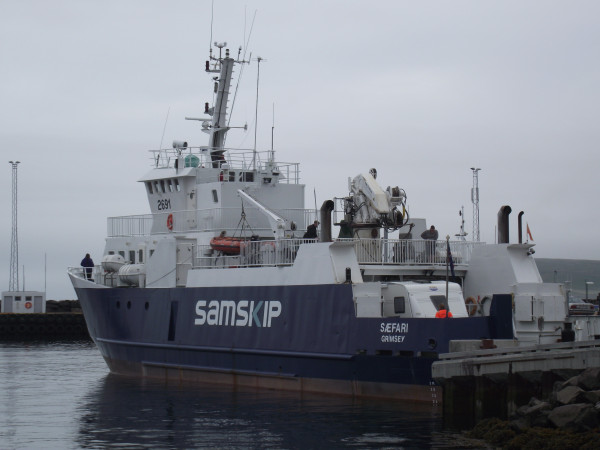 Happy Mark onboard, after leaving the harbour at Dalvík:

Puffins are this close:

Puffins on the steep cliffs:

All the white specks on the cliffside are puffins: 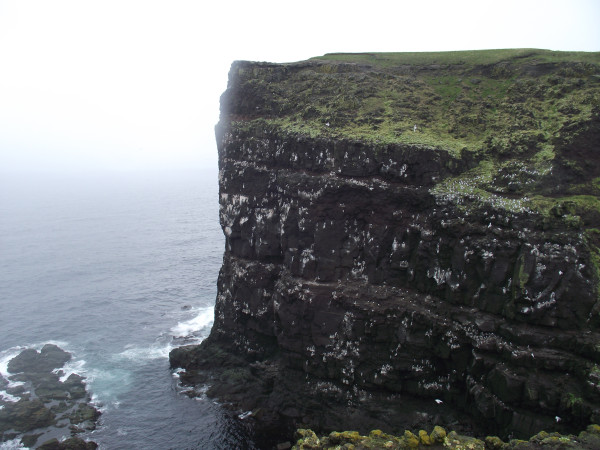