Now that I am back at home I can type Icelandic with all the relevant accents and proper letters. It has been three weeks since Mark and I arrived home and I have been wholly preoccupied with editing all of my photos, as well as Mark’s, on-line at the Black’s site before the company shuts its doors to photo orders on August 3. I will have a final photo count in the coming weeks but I had used up a photo card with 1500 picture credits on it, as well as the remainder of one of my older cards plus one I inherited from my mother. It would be safe to say that I printed out at least 1700 photos.

I just have some reediting to do and can devote more time to blogging about Iceland. I left off at the island of Grímsey. We arrived at 12:10 after a rocking three hours at sea. The ferry was full of seasick passengers yet neither Mark nor I felt woozy. We had four hours on the island before the ferry returned to Dalvík, so we had to plan what to do. It would have been possible to walk around the entire coastline of the island in four hours, but it wouldn’t have been any fun. Our first time in Grímsey was not going to be a race to see how fast we could circumnavigate the island.

Instead, we planned to walk to the northern part of the island, then head back south and stop in town. We figured that had we stopped in town first, we would have been stuck behind long lines at the two stores. The rain was constant, and it was impossible to keep my camera lens dry. I did try to wipe it but some of my photos have specks of raindrops on them. In spite of the low-lying fog what is unmistakably clear are the cliffs and their sheer height. Rising straight up from the ocean, puffin-dwelling cliffs dominate northern Grímsey. You can easily see these birds’ underground nests as the cliffsides are bulleted with burrows: The fog in Iceland lies low to the ground, and on some days it hung in a perfectly straight line right above our heads. You’d swear that any photos I took of this cut-off fog were photographic processing errors. It was surreal; imagine cutting the bottom of the fog off with a gigantic pair of scissors and then it hung in place, not dripping below the severed line. That’s Icelandic fog. Here, on Grímsey, the fog covered the ground. I could almost not see Mark as he walked ahead of me: 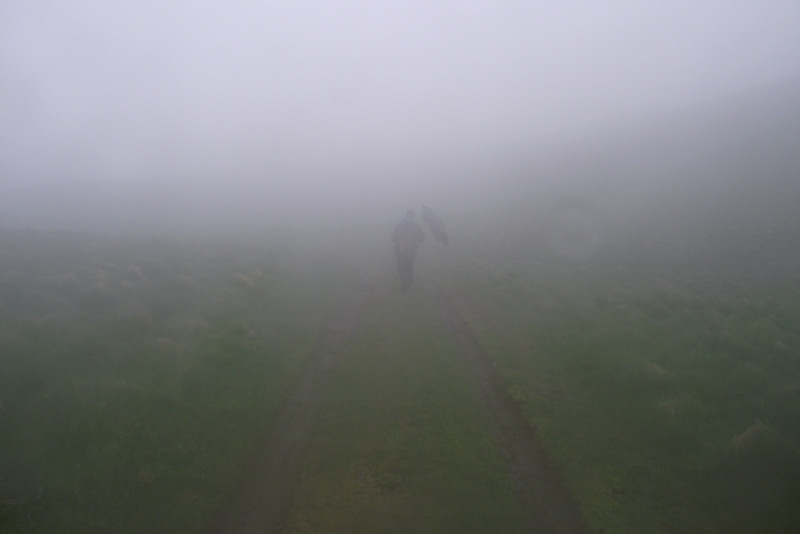 Mark is near the cliff edge, on our way to the northern part of the island. Puffins nest on the sides of cliffs. We thought that if the grass had been slippery and we started sliding down, we’d be in the ocean in a matter of seconds: 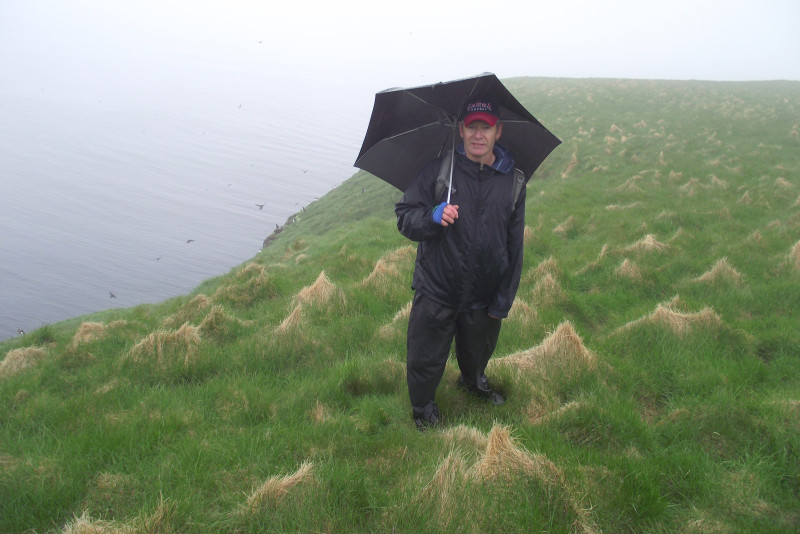 Arctic terns nest by the airport and they will attack you if you stray too close to their eggs. These birds are notorious in their relentless pursuit of trespassers. Straight out of a Hitchcock movie, the terns divebombed us as we walked along the runway (to the left of the fence). They would shriek and get extremely close to our heads. Mark bravely led the way as dozens of angry terns encircled him: The tiny general store which also functions at the post office. Note the red Pósturinn sign. I mailed most of my postcards from here, and watched the stamps get cancelled by hand: 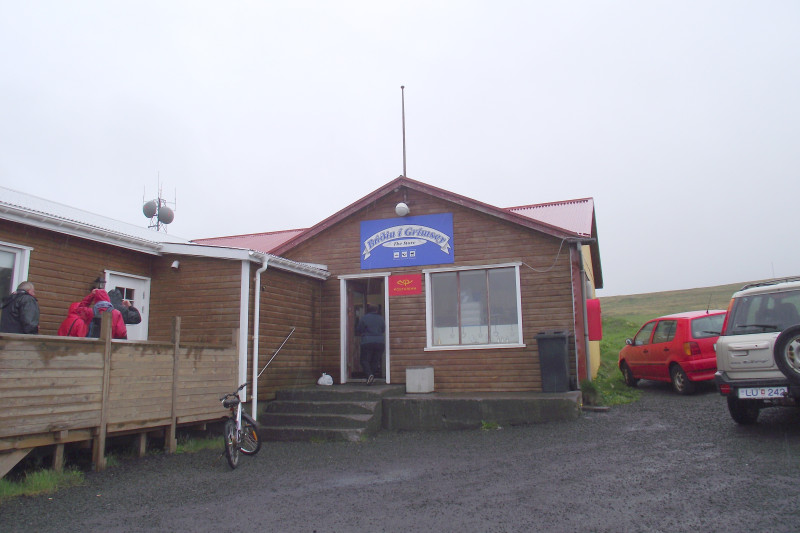