“Hey What Happened to You?”: My Victory Over Leukemia 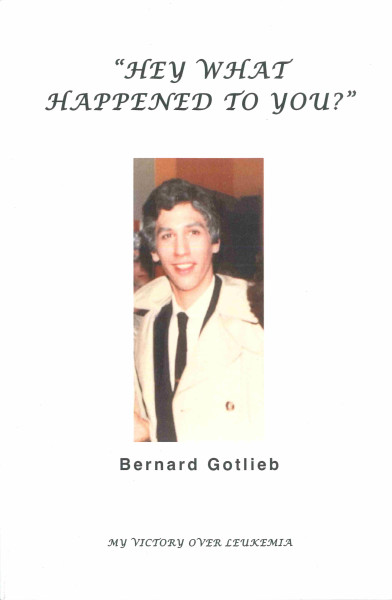 “Hey What Happened to You?”: My Victory Over Leukemia is Bernard Gotlieb’s memoir about the battle he has been fighting since he was eighteen years old. Gotlieb is one of the first–and now, one of the longest-living–patients to undergo a bone marrow transplant in Canada. “Hey What Happened to You?” at 134 pages is a brief retelling of his optimistic and life-loving story. Given a second chance by a life-saving transfusion of donor marrow by his sister, Gotlieb’s time in the hospital does not end there. He is constantly going back, often for lengthy stays (in isolation at that) due to complications from the original transfusion, radiation and the drugs associated with it. Gotlieb never adopts a woe-is-me attitude, and after doctor visits often found out that he must check back into the hospital immediately. He credits his loving family, friends and compassionate hospital personnel for making him as comfortable as possible. Simple tasks that we take for granted, such as eating, were a chore for Gotlieb. Yet he found a way to make us laugh as we read about his experiences:

“Life was going along well enough for me, except that my body was suffering from a big dryness due to the radiation: my eyes (I must put eye drops in many times a day), my skin, my mouth… I couldn’t eat like everybody. How my life would be so easy if I didn’t have to eat! I always maintained that if I could take one pill for all 3 meals, I would save so much time! Despite my problems and those that I imposed on my parents–life at home resembled a rather normal life.”

Yes, a normal life. That was tantamount to Gotlieb’s happiness. He still went to work and school, and when he graduated, he couldn’t resist injecting a little gallows humour:

“In 1994 I finally received … while still being alive … my Bachelor’s degree in Tourism Management!” (ellipses in original text)

What drove Gotlieb to live this normal life was the challenge of Scrabble. As the founder of the Montreal Scrabble Club in 1978 he developed his game and friendships he made through it.

In spite of the trials Gotlieb has faced he has remained above all thankful for life. He wrote about the ulcers and squamous-cell carcinoma that plagued his right leg. The consensus was to amputate below the knee. Three years later the ulcers and cancer spread to his left leg, and when the doctor read his verdict, Gotlieb was already expecting it. Throughout “Hey What Happened to You?” Gotlieb treats us to his unwavering humour in the face of such adversity. Even the story behind the title of his memoir provokes a chuckle. However when Gotlieb left his family in the hospital to prepare for his second amputation, his gallows humour returned:

“Before going to the operating room I couldn’t help but feel that I was going to my own execution: after taking some blood and my vital signs the nurse opened the curtains where my family was waiting to wish me well and said, ‘Okay, you can say your good-byes now!'”

Photos and cartoons illustrated the text, however I did not see an artist credit, other than Emond. The cartoons certainly enhanced the story and captured Gotlieb’s humorous demeanor that I know him for.

“Hey What Happened to You?” is a self-published memoir and unlike the sad majority of self-published works I have read this year, this one has been seen by an editor. I wouldn’t expect anything less from a champion Scrabble player, where a spelling error would be a mortal embarrassment. Nevertheless, I did note tpansplant (p. 42); automony (p. 63); hositals (p. 82) and C Difficle (p. 109). “Hey What Happened to You?” reads like an oral memoir and thus flows rapidly where the pages turn themselves. Perhaps because of such an oral style there was a superabundance of exclamation marks, which was the only distraction to the reading experience.