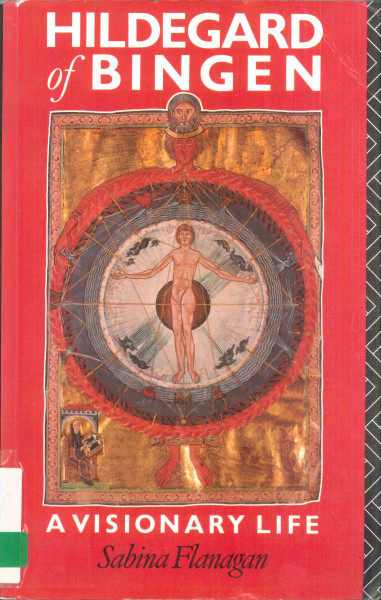 Hildegard of Bingen, 1098-1179: A Visionary Life by Sabina Flanagan was a short introduction into the life and work of this mediaeval woman. I found her life story and the concluding chapter devoted to a contemporary medical analysis of Hildegard to be the most interesting parts of the book. I did not however enjoy the analysis of her religious writings, which were dry enough to induce this reader to sleep. Her medical writings, however, were entertaining which provided an entirely different story to the life of Hildegard, whose mass of knowledge was vast and not just on religious matters.

Hildegard perceived visions as young as three years old, and would see these throughout her life. She was convinced that these visions as well as the meanings she derived from them were not communications intended solely for her. Instead, Hildegard believed that her visions and later analysis–which sometimes took weeks or even years of recollection and recording–were communications to her not by angels, prophets or any other holy people, but were sent to her by the Lord God Himself. It was this belief, that everything she saw and interpreted was a direct communication with the Divine, that enabled her to accumulate such power and influence during her lifetime. This privileged link with God gave Hildegard the capacity to put her visions and interpretations to print. She was allowed to preach and to set up a convent. She travelled in spite of living in a cloister. Hildegard was a composer whose work survives a millennium later. She is one of the earliest feminists, who was the lone woman in worlds dominated by men. And she wasn’t just a woman among male equals; she was a woman of power with a direct line to the Pope and nobility.

Hildegard was a prophet whose visions inspired her writings, which she only started to write down during the second half of her life. At first her visions terrified her and she could not comprehend them. This is no surprise if you experienced your first vision at the age of three. As a young woman Hildegard learned to read and write, and produced a diverse selection of writings, including medical diagnoses and cures. Some might interpret her cures as witchcraft, while I think they more resemble snake-oil quackery. Some of her so-called cures have nothing medically redeemable about them. I am sure her post-hallucinatory analysis was nothing more than flamboyant guesswork by someone who may have tricked herself into believing she was godlike in having a rescue complex. The following cures elicit laughter or horror, not wonder:

“There follows a rather macabre remedy for jaundice, using a stunned bat which is tied to the back of the sufferer before being transferred to the stomach and worn there until it expires.”

“…her cure for fevers using copper boiled in wine sounds rather dangerous, especially if the wine were acidic. Since many of the prescriptions involve ingestion of powdered metal, they seem unlikely to have been employed on a large scale.”

“The sparrowhawk, however, figures in a complicated recipe for counteracting libidinousness in man or woman:
“Take a sparrowhawk, pluck it, then having discarded the head and entrails put the rest of the body in a new pot perforated with small holes and put it on the fire without water and put another pot under it to catch the drippings. Pound some calandria and a little camphor and mix with the drippings and heat it on the fire again and thus make an ointment, and a man should anoint his genitals with this for five days and then his libidinous cravings will be gone in a month. The woman should put it around her waist and in the navel and her ardour will cease in a month.”

I can only ask if Hildegard practised any of these remedies on actual sufferers. Did others follow her cures or were they only ever cures “in theory”?

Flanagan saved the most salient revelation about Hildegard until the very end. Her theory is that Hildegard suffered from severe migraines. In fact, the symptoms of her illness (which she recorded in meticulous notes along with the documentations of her visions) match the pain, paralysis and mental fireworks of some extreme sufferers. Migraine attacks can afflict the very young and a strong attack on a three-year-old would have had a profound effect on Hildegard as well as her parents. Subsequent attacks accompanied by the blur of visionary auras would transform one’s sense of perception and interpretation. If one perceived the illusion of visions while undergoing a migraine attack it makes sense that a mediaeval woman would interpret this in a context she was familiar with. To a mediaeval mind, then, mysterious visions accompanied by severe neurological phenomena were given a Divine provenance.