History of the Acadians

My partner Mark is a native Nova Scotian and I have taken an avid interest in reading about different aspects of Nova Scotia history. Almost all of this reading predates when I started to write blog reviews, but two novels by Frank Parker Day, a short novel about Africville and an autobiography by Rita MacNeil are included here. Whether my reading is about those Nova Scotia topics or the Halifax Explosion of 1917, the Black Battalion or Sable Island, I regard all of this as an intellectual act of love. It is my maritime christening by edification.

While I was sorting through library donations about a year ago I discovered History of the Acadians by Bona Arsenault. I wanted to read it before my upcoming trip down east. I like to pick a Nova Scotia book just before travelling there; last year I read Rockbound by Frank Parker Day. It gives me a bit of local knowledge that I hope to share with Mark’s family and friends. History of the Acadians is an English translation from 1994 but the translator was not identified. The original work, Histoire des Acadiens, must have been published in the mid-sixties, based upon some references Arsenault makes. Unfortunately it was a poor translation, with humorous spelling errors (“half-bread” for “half-breed”) and the repeated eyesore “Britanny” for “Brittany”. Poor translations do not read well, and I wished that I had come across the original French edition in the donations pile, for it took me a long nine days to read the English version at 268 pages. 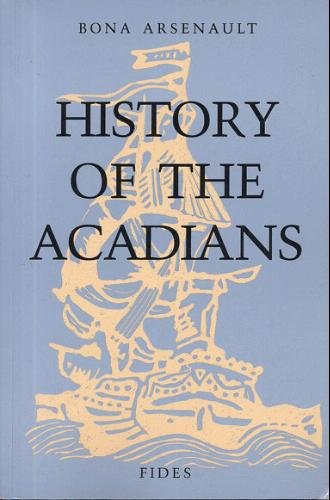 Arsenault tells a thorough history of Acadia from its founding settlement of Port-Royal in 1605 to the Acadians’ forced exile and resettlement throughout the cities on the American east coast from 1755 to 1762, their journey to Louisiana, and eventual return to Acadia in the late eighteenth century. The Acadians were a hearty people who had adapted to the land and were allies with the Mi’kmaq (Micmac) First Nation. Before the Great Expulsion they had survived past invasions and attempts to force them out. Their tenacity and determination to retain their French language and Catholic religion were viewed as threats by the English, who negotiated to allow them to stay on their land provided they took an oath of neutrality and did not take up arms with the French against them. As a peaceful people, the Acadians agreed to these conditions, and found it quite easy to live in harmony among the English.

It was a tragic story how the peaceful Acadian families were assembled and dispersed in chaos onto ships, bound for unknown American cities. Families were under the impression that they would reunite whenever the ships reached their destinations. Imagine the heartache when you realized your children and spouse were not among the passengers who disembarked, while the rest of the ships had long ago set off. Some states welcomed the Acadian refugees and treated them with charity and open arms. Other states, however, regarded them as delinquents (since they believed the Acadians were exiled after all for a reason) and assigned them to live in squalor. Children who were separated from their parents were sold into servitude and treated like slaves, working side-by-side with those from the African diaspora. Hundreds of families were broken up forever, while others could only reunite decades later.

Arsenault documented Acadian family names to a painful degree of detail; he would list name after name of the settlers who inhabited, or resettled in a specific area. It wasn’t annoying to see multiple paragraphs of names listed alphabetically, but I did find the juxtaposition of French and English place names, like “Ile Saint-Jean (Prince Edward Island)” to be. Every time he wrote the original French (or native) name of a place, he added the current English name in parentheses next to it: “Ile Royale (Cape Breton)”; “Chibouctou (Halifax)”; “La Hève (La Have)”.

On my first visit to Nova Scotia with Mark we visited the Grand Pré National Historic Site, where the Acadians were assembled and deported from. I would like to revisit this site now that I have learned so much more about Acadian history.