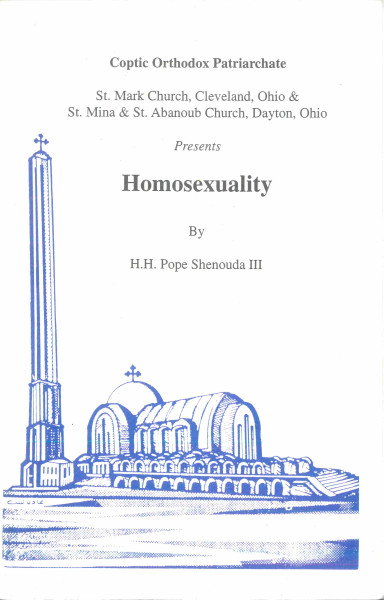 I found Homosexuality by H. H. Pope Shenouda III in a recycling bin at work. Someone had donated to the library a collection of books published by the Coptic Orthodox Church. I have been known to dive through these enormous recycling bins looking for any appealing rejected books and fished this one out. It was a 24-page tract and still had two price stickers on it (on the back, for $2.00). I am not about to debate anyone’s freedom of religion, be he a layman or the very Pope of his church. I am also not going to critique what the Bible says or doesn’t say about homosexuality. However I will poke my nose into what this Pope himself has written or said about homosexuality by repeating his own words in the passages below. I don’t feel I even need to comment on all of his statements; they can speak for themselves:

Under the heading “Homosexuality Is Against Health”:

“I think that in our present day, our Lord God gave a great warning to people in the form of AIDS. But unfortunately people do not fear even such a fearful disease. It is a warning to such people who suffer defilement of the body.”

Disease has always been among us. In the fourteenth century a sizable minority of the European population was wiped out by the bubonic plague. COVID-19 is ravaging the world right now. AIDS can be transmitted to anyone, not just sexually active gay men.

Under the heading “Homosexuality Is Against Manhood”:

“How can a person who is used as a woman be called a man? He is deprived of his manhood and is not considered to be a man any longer.”

This is the unfathomable hangup of homophobes: that a man can be “used as a woman”. Why are they always preoccupied with this? Do they feel the same way about gay men who are not and have never been “used as a woman”? The average person doesn’t care about any of this. Why then are there some people (both religious figures and not) who are preoccupied with the sex lives of gay men? They do not realize what I consider to be an accurate estimation in that the majority of sexually active gay men do not in fact engage in activity where one of them is “used as a woman”. In this psychologically self-revealing constant damnation of gay men, the Pope and others wholly ignore female homosexuality and the panoply of sexual activity that heterosexual people may engage in. If you broadened your horizons you would realize that any specific sexual activity is not confined to any one group of people.

Under the heading “Homosexuality Is Against the Holy Sacraments”:

Under the heading “Rights For Homosexuals”:

The final section of the book is a question-and-answer segment. The Pope answers the question “How may we help them?” with:

“We cannot say to them that your way is acceptable because you were born so or you have some excuses–we cannot say it. Sin is sin, whatever the reasons are.
“In order to help them, firstly say to them: ‘This is a sin. This is an abomination’. And then let them enjoy the spiritual life. The person who tastes the sweetness of spiritual life may leave such a way of abomination. Because people are always occupied with worldly matters, they do not give time for prayer, for contemplation, for spiritual songs, for reading the Bible, for reading spiritual books, so their spirits become very weak and such weak spirits cannot resist temptation. If we try to strengthen their spirits, to let them practise spiritual ways, as I said, they grow better.”

Yes, I am sure all of your fasting has done wonders to cure me. Now go eat something.