How the Hell Did This Happen? The Election of 2016 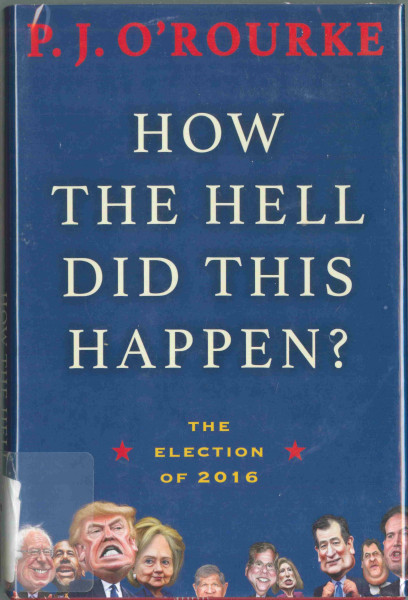 I thought that I would enjoy How the Hell Did This Happen? The Election of 2016 by P. J. O’Rourke. I have read this author before (Holidays in Hell and Give War a Chance), yet I wasn’t as impressed with either of them when compared to how O’Rourke presents himself on television or in radio appearances. However when it came to his newest book, How the Hell Did This Happen? I was expecting classic O’Rourke wit, since the subject matter (and the book title alone) call out for riotous gales of laughter. I was prepared for a good read as soon as I read this accurate line:

“The 2016 presidential campaign is the most severe case of American mass psychosis since the Salem witch trials of 1692. In fact, it’s worse.”

So how could P. J. mess up on this one? We’re talking about President Idiot here and the endless jokes about his baldness, weak chin, small hands, onion-thin skin and minuscule sex organ. It would be easier to make all these jokes than to shoot fish in a barrel. President Idiot would only be an easier target if his McNugget ass grew larger.

Unfortunately, I didn’t even chuckle while reading this book. It was boring throughout its brief 216 pages. O’Rourke reviewed the campaigns of most of the presidential candidates from the two major parties but I didn’t learn anything new. I’d have thought that with a book title as exasperated as the one O’Rourke chose, he’d uncover a hidden election revelation or two. I guess that’s what the Mueller investigation is for. At least he’d tell a woe-is-us story where somehow among our commiseration we could all find a little humour during the current Idiot administration. O’Rourke did compile this book from a collection of articles and media appearances so he had to stitch it all together to seem coherent, and it did have a rapid flow to the read, but the chapters were exceptionally short which precluded any real insight or revelations.

O’Rourke, a Republican, claimed to have voted for Hillary Rodham Clinton instead of the tantrum-prone Idiot. He reasoned for his party switch with the following excuses:

“Better the devil you know than the devil who knows nothing. A devil who can’t even figure out where the gates of hell are, and they’ve got his name right on them at Trump Tower.”

“Better the scurrying of mousy progressivism gnawing at the fabric of society in the White House than a rat on the Oval Office desk.”