How to Travel the World for FREE: I did it, and you can do it, too! 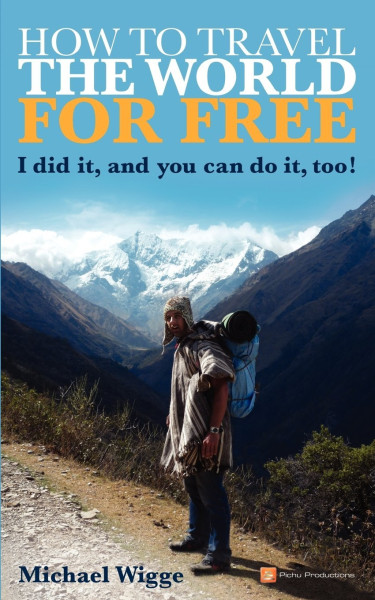 Michael Wigge wanted to see if he could travel from his home in Berlin all the way to Antarctica without so much as a euro cent in his pocket. Could he really travel halfway around the world for nothing? How to Travel the World for FREE: I did it, and you can do it, too! is Wigge’s account of how he did just that. From the outset he had to beg for food and free hotel accommodation, dive into Dumpsters and invent new ways to make money when simple begging wouldn’t work. Thus Wigge does in fact use money on his journey, just not money that he himself brought along with him. Wigge wrote a travel diary that I did not want to put down, and I enjoyed reading how he–often illegally–found his way aboard buses and trains by stowing away:

“On the train ride to Belgium, I decide to save my 55 Euros for later and don’t buy a ticket. My brilliant plan is to hide in the restroom for the entire trip.”

Wigge gained free passage across the Atlantic by doing minimal work aboard a container ship bound for Montreal. However once he landed in Canada he ventured to find one of his intended destinations:

“I feel extremely happy and lucky when I arrive later that evening in the town of St. Catharines (where Niagara Falls is located).”

Niagara Falls is most definitely not located in St. Catharines, which is a separate city twenty kilometres to the northwest. Glad he made it to the Falls, nonetheless.

While in the United States Wigge found that he could easily obtain free food from burger joints like McDonald’s. Whenever he entered a restaurant, he told the staff his plans to travel the world for free. The staff, many if not all of them being cash-strapped students, were sympathetic and all too willing to overload him with free food.

Not all of his attempts to gain free food involved the generosity of restaurant employees. Sometimes he had to take matters into his own hands and, like his adventures stowing away, break the law:

“Normally I drink tap water, but owing to the high chlorine content here, it tastes horrible, so I find a new source of hydration. On the Vegas Strip I go through the different outlets with an empty cup from McDonald’s, in order to refill my drink from the McDonald’s soda machines. No one really checks to see who refills the cups, so it goes rather smoothly. I am growing more and more innovative by the day.”

How to Travel the World for FREE appears to be self-published, yet since Wigge is a native German I expected to see a translation note in the publication data. There is indeed a German version which predated How to Travel the World for FREE by two years (Ohne Geld bis ans Ende der Welt: Eine Abenteuerreise came out in 2010). I wonder if Wigge himself wrote the English version. An editor was credited but I seriously doubt the book was given the once-over by a native English speaker. While I enjoyed Wigge’s travel diary immensely, I cringed at the abundance of spelling and grammatical errors within. A little editorial tweaking could have turned Wigge’s account into a diary that did not betray his less-than-fluent English proficiency. Some examples include:

“Mark and his wife, Elizabeth, live in a nearby house. When I first see Elizabeth, I have to wonder if I have landed on a Hollywood set and, like Harrison Ford, am actually searching for the witness. Basically, Elisabeth looks a lot like Angelina Jolie…”Elisabeth married Mark when she was 19 years old…”

Wigge goes back and forth with alternate spellings of the name Elizabeth/Elisabeth. The former is the spelling used more often in North America; the latter is the German spelling.

As Wigge makes his way from Panama into South America en route to Antarctica, he passes through Colombia. In one single paragraph, he alternates the spelling of “Colombia” with “Columbia”.

“Some passersby look at me a little curiously: a six-foot-tall Latino wearing a traveler backpack is probably a rare site around here.”

As a speaker of German myself, I could see from Wigge’s English grammar how he sometimes calqued his own translations. It was most evident in his expressions using the preposition “without”. On a trip around the world with no money, often with no food or accommodation (thereby leaving him with no option but to beg), the word “without” came up a lot. In German, one would leave out the indefinite article in the phrase “without a [plane] ticket” = ohne Ticket. Wigge would calque the expression into English as “without ticket”. Examples of missing indefinite articles made the read choppy and ruined the comedic effect.

For the American reader Wigge converted all metric measurements to imperial, thus he used yards, feet, miles and pounds, but royally screwed up with one photo caption after he had made it as far south as Patagonia:

This was the only metric measurement that slipped through, and it is incorrect. Per square meter? Wigge even spells words the American way, but that’s not my point. Square metre versus square kilometre? Or square mile? How densely populated is Patagonia?

I will always nitpick works that have been sloppily edited (if edited at all). That aside, I found the episodes where Wigge acts subversively to be the funniest of all, inducing me to laugh out loud during my lunch hour read. While on the ship that will take him from Ushuaia to Antarctica, Wigge is provided free passage under the condition that he work while on board. Shortly after boarding, he meets the captain of the Antarctic Dream:

“A few hours after departing from the harbor of Ushuaia, I go to the bridge to say hello to the captain. He warns me not to go on either of the side wings of the bridge, because they are not protected against the wind. Naturally, I want to test this out immediately…”

…and he then proceeds to slip and fall against a very slippery and not too stable bridge while being drenched with icy water.

How to Travel the World for FREE was too short in some places, as I would have loved to read more about his Antarctic adventure than a mere nine pages. He makes many touching observations about the universal good nature of humanity, and specifically his time spent with an Amish family in Ohio, as well as with an enormous extended family in a cramped house in Cartagena, Colombia, are the most poignant. From “couch surfing” to sleeping rough outdoors, to being given free hotel rooms or free accommodation and meals in the homes of total strangers, Wigge has shown that his enthusiasm, charm and sincerity can open doors versus leave them shut in his face.