I have arrived in Cape Town

On Monday morning I awoke to my alarm. I was using a different alarm clock as the smaller one I usually use was already packed for my vacation. I worried that since I was getting up so early (I had set it for 3:30 a.m.) I might forget to pack it. The one I had set was chunky and octagonal in shape, and when I picked it up, I was startled when I saw the clock face read 8:45. Oh no–my flight to New York was at 6:30! Did I sleep in? I lay in bed, puzzling over how come the alarm didn’t go off when I set it. I didn’t panic and make a fuss, but in my daze of only four hours sleep I had the sense not to get all worked up about it until I had put my contact lenses in. It was then that I realized I had been looking at the clock upside down. The alarm had gone off at 3:15, not 8:45.

I had breakfast and then spent a few minutes composing the previous blog message. Mark drove me to the airport. I am usually choked up when I say goodbye to my budgies and then when I call Mark at work from the departure lounge. This trip was different in that Mark generously drove me to the airport and I was cool and coherent when I said my goodbyes. I wonder if a later departure time would have turned me into a blubbering frownypants.

At 4:55 the airport was empty and there was no lineup to check in. Good thing there wasn’t anyone around because the agent told me that my suitcase was seven pounds overweight and that I would need to repack. I couldn’t believe it. I had packed no books in my suitcase; they were all in my carry-on backpack. I was dumbfounded. Really. I could not figure out why my new suitcase–which on its own when empty weighed about thirteen pounds–could have been overweight. And I had deliberately packed fewer clothes than usual, since the Tristanian family I am staying with will be doing my laundry (this service is included in my home stay fee). A different agent told me to take out any shoes or jeans, as next to books they are heavy weight. What I ended up doing was emptying out every one of the seven boxes of cookies from my second carry-on bag, and stuffing them into the suitcase. I took out my new hiking shoes, my bag of three pairs of jeans, my clunky battery adapter, the bag of gifts for the Tristanian family’s children, a box of moist wipes and my second camera. Ever since a fellow traveller’s camera broke down on our trip to the Democratic People’s Republic of Korea, I have worried about what I would do if I was in a situation where I could not buy a replacement camera easily, or at all. After this transferral of goods from suitcase to carry-on, I was within the weight limit and proceeded through check-in.

My initial flight to New York (JFK) had been cancelled and I was given a flight to LaGuardia two hours earlier than my JFK flight. I was needless to say not pleased at all to receive this news shortly after I returned home from Norway. I have commuted by shuttle between LGA and JFK before and hated it, so I was not keen on travelling that way again. I was ready to hail the first cab I saw. While speaking to the US customs agent in Toronto about the purpose of my trip, he reminded me that today was Labour Day, and there would hardly be any traffic in New York City at 8 a.m. The flight landed on time and my suitcase was already on the carousel after I made a bathroom stop so I was out of LaGuardia by 8:15. It was then that I decided to take a $13 shuttle to JFK versus a way more expensive cab. The shuttle was practically a personal cab anyway, since there was only one other passenger and his terminal came up first. I had to sit back as the shuttle snaked throughout JFK from terminal seven to four in what seemed like an unnecessarily circuitous route.

I am staying at the Breakwater Lodge at the Waterfront, part of the Protea Hotels chain. It is not far from the East Pier, where the S. A. Agulhas II is docked. After I settled in to my room, I walked to the pier to find the ship. It took only fifteen minutes. Here is the ship I will be aboard as of noon on Thursday. We set off for Tristan at 2 p.m. but all passengers have to be on board by noon:

I walked around Victoria Wharf after and browsed in the bookstore Exclusive Books (or, as they stylize it, Exclus1ve Books) looking at all the language materials on Afrikaans, Xhosa, Sesotho and Zulu. I enquired about translations of Le Petit Prince in these languages since I could not find any. A clerk told me he could order an Afrikaans edition and I could pick it up after I return from Tristan in October. I stopped by the Wharf’s post office and naturally took a couple photos of the mailbox outside: 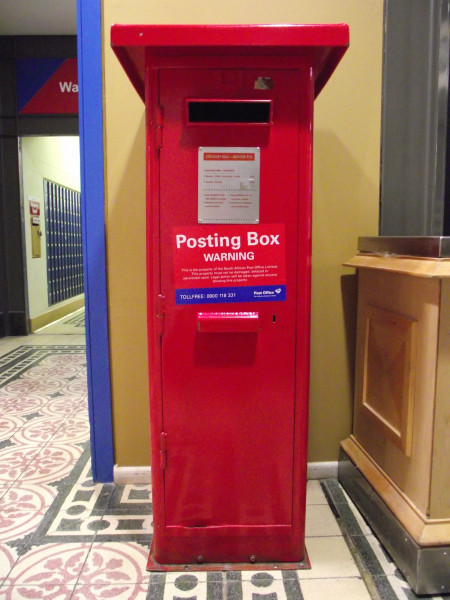 And in case you’re curious as to what that “warning” is all about: 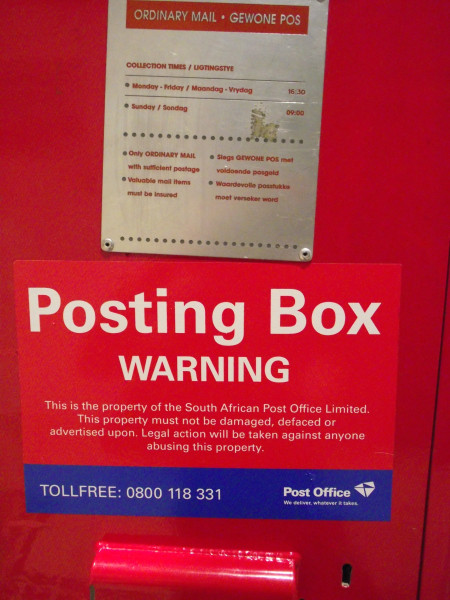 After I send this, I will eat some sushi and salad I picked up at the Victoria Wharf Pick and Pay, write a couple postcards, then get to bed. I have a lot to do tomorrow, the most important task being paying for my passage aboard the S. A. Agulhas II.