Last year from late June to mid-July Mark and I spent sixteen days driving around Iceland. Mark really did all the driving as I don’t have my licence. Whenever I travel I always hit the bookstores and I certainly had a huge book haul during this trip. The national book chain Eymundsson was the place I spent most of my time (and krónur) however I did visit some second-hand shops in Reykjavík and Akureyri. While I spent a lot of my own time at work, one and two days after returning from Iceland, scanning the covers of all the books and DVD’s I bought, I never got around to writing about them until now.

First up: Surtsey, the fascinating island that arose from the sea in November 1963. I dreamed of seeing Surtsey, and while I knew that tourists were not allowed to land on the island, Mark and I took a boat tour where we saw it: I bought several books about Surtsey: 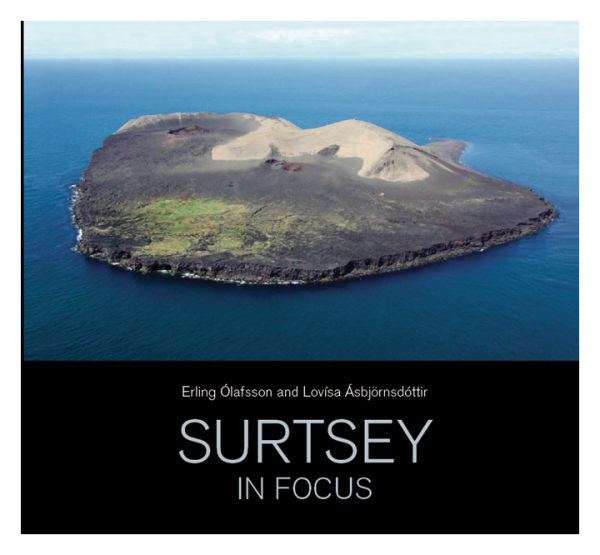 Surtsey in Focus by Erling Ólafsson and Lovisa Ásbjörnsdóttir, an oversize 2014 edition with beautiful photos outlining the volcanic island’s evolution, erosion, and colonization by flora and fauna. A truly lovely book to spread out and examine. I fell in love with Surtsey: Lífríki í Mótun by Sturla Friðriksson by its photos. It did not matter that this 1994 hardcover book was in Icelandic; I had to have it for the photos. Perhaps I bought it too hastily, because later on during our trip I found: the same book, in an English translation in paperback, Surtsey: Ecosystems Formed at another retail bookstore, Mál og Menning. Oh well, maybe people will see the hardcover Icelandic edition and think I can read Icelandic.

Iceland is a nation of readers and writers, and it makes sense that if there are no less than three Eymundsson stores all within Reykjavík (and all easy to get to on foot in short walks) as well as Mál og Menning, that there would be a lot of second-hand shops too. However, as I found out from the bookstore employees themselves, there was only one second-hand bookstore in Reykjavík, Bókin. I was happy to find this there: Surtsey: Eyjan nýja í Atlantshafi / The new island in the North Atlantic by Sigurður Þórarinsson. This book came out in November 1964, exactly one year after the Surtsey eruption broke through the surface of the ocean. Surtsey was still forming in November 1964, so this book was about an island work-in-progress. It is a diglot, with the text first, followed by photos. The complete Icelandic story was followed by the English (and not both languages sharing the same page). 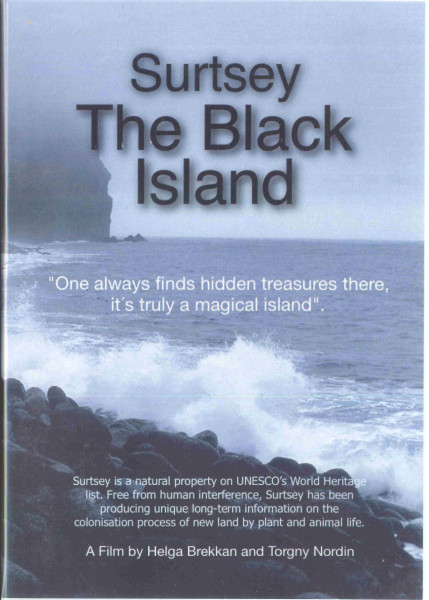 I picked up the DVD “Surtsey: The Black Island” at Eldheimar, the volcano museum on the island of Heimaey in Vestmannaeyjar. It’s forty minutes of island history, including harrowing tales from the scientists who first explored Surtsey shortly after its initial eruption, only to be trapped on the island when the eruptions started again. I could not wait to watch this and had Mark, Grant and Evelyn come over shortly after my vacation so we could watch it together. I’ve already watched it again; I can’t be bored with such recent tales of Icelandic vulcanology. Is it any wonder I also went to Tristan da Cunha and explored its volcano which erupted in 1961? I found Gosið á Heimaey: í Máli og Myndum by Þorleifur Einarsson also at Bókin. This book, from 1974, translates to The Eruption at Heimaey: in Words and Pictures. In 1973 a volcanic eruption occurred in the middle of the night, without warning, and led to the evacuation of all five thousand residents. Mark and I visited Heimaey and climbed Eldfell, the volcano that erupted. 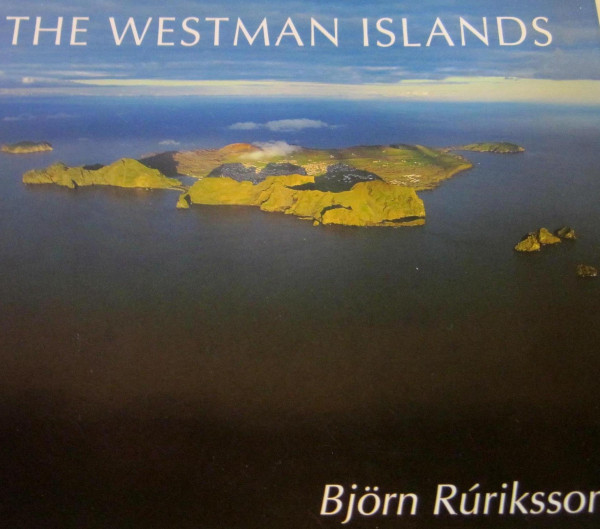 While we were on Heimaey, I saw a Danish edition of the 1995 book The Westman Islands by Björn Rúriksson in the lobby of the Aska Hostel, where we stayed. (These islands are known in Icelandic as Vestmannaeyjar, how I choose to call the archipelago.) I loved the book, and saw multilingual editions for sale, in Danish, French, Icelandic and German (although the French editions didn’t have dust jackets) at the Viking Tours office in Heimaey. Now, I know I could have functioned very well with the French edition, however just look at the dust jacket cover! This coffee-table book has such large and bright pictures of the islands, aerial shots, as well as photos of the flora and fauna. There were not many photos of island residents. I say this because Eldheimar had a great sale on another book about Vestmannaeyjar but its main focus was the people who lived there, with not as many photos of the islands themselves. That was the real draw for me: photos of the islands, not the inhabitants. So while I was still on Heimaey I did an Internet search for an English edition of the Rúriksson book and found one. I ordered it on the spot.

More to come about my Icelandic book and DVD purchases.