Iceland is surrounded by many small islands, and part of our trip entailed visiting two of them. In the post I wrote after our first trip to Iceland in 2013, I described a book I bought that was about Iceland’s islands. In part one of my current book post, I talked about the books I bought about Heimaey, where Mark and I spent a few days. We also saw all the islands in the Vestmannaeyjar archipelago during a boat tour, including Surtsey.

The isolated island of Grímsey is located 40 km north of the mainland and was a very rough three-hour ferry trip from Dalvík.

In my research before this trip I knew that an Icelandic book about Grímsey was published in 1971, yet try finding it now. Fortunately after a lengthy search in an Akureyri second-hand bookstore, where none if its books were arranged in any order whatsoever, my efforts turned up Grímsey: Byggð við Norðurheimskautsbaug by Séra Pétur Sigurgeirsson. The title translates to Grímsey: Built on the Arctic Circle. Full of maps and photos (many in colour) it was worth the steep 7600 ISK price. The book didn’t have a dust jacket, which made it all the harder to find. In my post-trip research I have located a photo of the jacket, which had it still been part of the book would have made it jump right out at me: 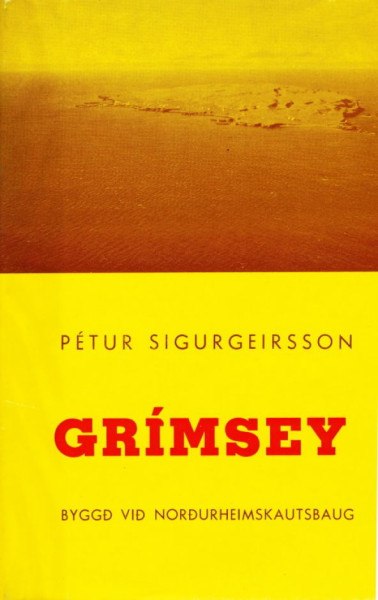 Grímsey had a small souvenir shop selling woolens and very expensive postcards. I knew that I would have no time to write a lot of postcards from the island, although I did take a break from my hike to write Grímsey postcards to two Icelandophile friends. I did however take all of the Iceland postcards I had written up till then and mailed them from the island post office. The gift shop sold this small photo book: 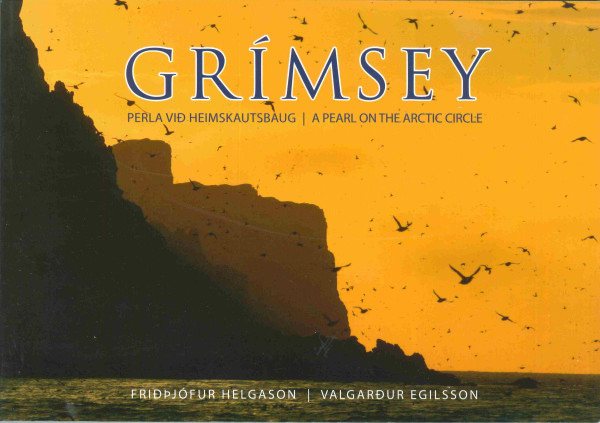 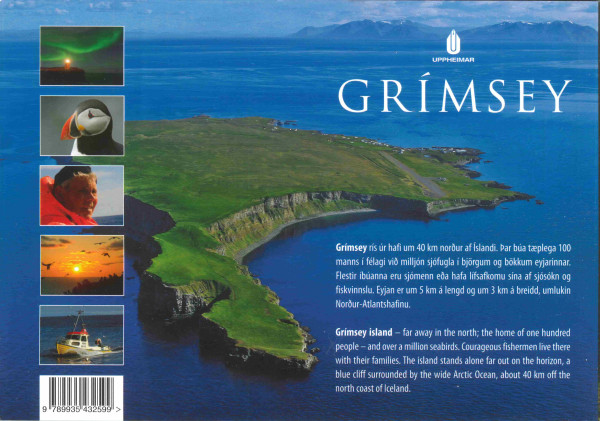 Grímsey: Perla við Heimskautsbaug / A Pearl on the Arctic Circle with photos by Friðþjófur Helgason and text by Valgarður Egilsson was a diglot with Icelandic text followed by English, then 92 pages of colorful shots taken in clear blue-skied weather. It was a grey misty foggy day during my visit, as seen in the photo I took of Mark during our hike: 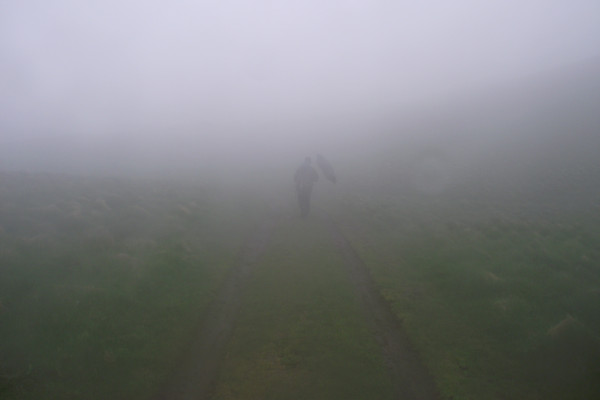 The Icelandic book written by Pétur above was not the first book written about Grímsey. While I was chatting with the owner of Fróði, the second-hand bookstore in Akureyri, she told me that a second book had been written about the island (she was not referring to the small photo book). Incredibly, the book was written in English: Arctic Living: The Story of Grimsey by Robert Jack was published in 1955 and I found a copy in excellent condition while doing some on-line detective work while in Reykjavík. A few pages of black and white photos were included. My copy still had a pristine postcard from the Ryerson Press stuck inside, with a note to “Place 4 cent stamp here”.

At Fróði I also picked up a book about another island group, the Faroes: Færeyjar: Land og Þjóð by Jörgen-Frantz Jacobsen was published in 1948. It consisted of Icelandic text followed by 65 plates of black and white photos, showing how life on the Faroe Islands used to be.

While I continue on this Faroese diversion, I also picked up two books about the language. Íslensk-F­æreysk Orðabók is a unidirectional Icelandic-to-Faroese dictionary compiled by Jón Hilmar Magnússon. I have no practical use for this dictionary other than that it satisfies my interest in comparative linguistics. I saw many books about the Faroes while in Iceland, and even a few Faroese licence plates. Ferries do travel between the two, so Iceland sees its share of Faroese visitors.

Before Mark and I left for Iceland, a friend of ours, Glenn, put us in touch with his friend Kristófer, who while Canadian-born is now an Icelandic citizen living in Reykjavík. During a visit at Kristófer’s place for lunch I gazed in admiration at all of his books. How could I not? I asked if I could take a look at Faroese: An Overview and Reference Grammar, a hefty 501-page paperback. When Kristófer took it from the shelf he was more than happy to offer it to me if I wanted it. It was far too big and he was looking at downsizing his book collection anyway. I was delighted to take it off his hands, and we shared a long conversation about Faroese language and literature, as I do know a fair bit since I visited the Faroes in 2003 and picked up a suitcase full of books.

I write this post one day after hearing that Yoko Ono has been hospitalized with “extreme flu-like” symptoms. Ono is a hero of mine, and one day before I heard this news I had placed an order for her new tribute album, Yes, I’m a Witch Too, the second such album where other artists offer their own interpretations of Ono’s songs. Friðarsúlan í Viðey / Imagine Peace Tower commemorates the column of light (it is not actually a tower structure) that Ono created in memory of John Lennon and his vision of world peace. This tower is on the island of Viðey, not far from Reykjavík. I saw posters advertising boat trips to Viðey. Since our trip to Iceland was in the middle of summer, the nights were bright and even though we were slightly south of the Arctic Circle, midnight in late June and early July was still as bright as day. Therefore the light beam was not lit, as it wouldn’t have been visible. The Imagine Peace Tower beam is lit only from October 9 (Lennon’s birthday) until December 8, the day he died. This book was entirely in Icelandic, and included the story and pictures about the tower’s creation as well as photos from John and Yoko’s early lives. Pictures featured the tower’s dedication in 2007, and one shot showed Ono with her son Sean and Olivia Harrison and her son Dhani. The book also included a sheet of ten Iceland 120 Kr stamps, surrounded by “Imagine Peace” translated into 24 languages (including Georgian and Inuktitut) and a DVD about the tower.

Still more to come about my Icelandic book and DVD purchases.