On my latest holiday Mark and I visited four places: Iceland, the Faroe Islands, Copenhagen and Berlin. After my 2015 trip all over Iceland I came home with a suitcase full of books. I didn’t buy many books this time. In fact, I didn’t buy a single new book, and bought second-hand books only. I will write about all the books and DVD’s I bought in four instalments, based on vacation destination. Iceland is first.

I returned to Bókin, a large second-hand store I visited in 2015. The language books and dictionaries were moved from next to the entrance, where they were three years ago, to the back of a narrow alcove. I saw the books I was interested in but since full boxes were blocking me from accessing them, I tried to read the titles on the spines from a distance. Naturally I couldn’t see anything very well nor everything there was in that section, so I resolved that I would have to climb over the boxes. And so I did, stepping on the top of one box and hopping on one foot to swing my other leg around and into the small gap there. Unfortunately I didn’t find anything of interest, but I was glad I took the opportunity to look. In the store’s section on Iceland, I found the following: Eldar í Heimaey by Árni Johnsen was published in December 1973, the same year the volcano named Eldfell erupted and threatened to bury the island named Heimaey. The title translates to The Fires of Heimaey. The book is full of black-and-white and colour photos. 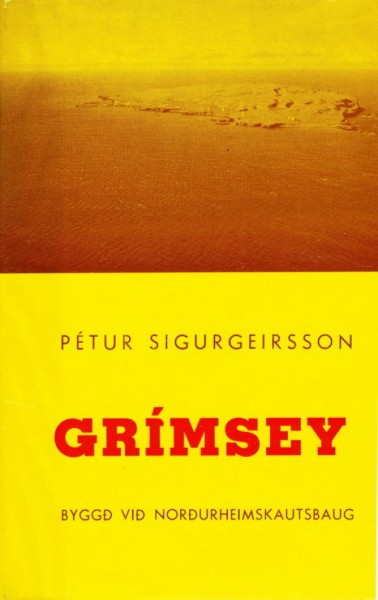 I bought this book, Grímsey: Byggð við Norðurheimskautsbaug by Séra Pétur Sigurgeirsson, without a dust jacket when I was in Akureyri three years ago. When I walked into Bókin I found another such copy. I told the store owner that I was looking for this same book but with its dust jacket. He disappeared at length and brought back a copy with dust jacket intact. The dust jacket paper was very thin and a miracle it hadn’t ripped since the book came out in 1971. The Reykjavík flea market is open only on the weekend and Mark’s sister Patsy and I spent a good long time there. Three years ago I only had time to have a quick look around. I poked around many book stalls and found Vatnajökull: Ice on Fire by Ari Truasti Guðmundsson and Ragnar Th. Sigurðsson in one particular stall that had an admirable collection of books on Iceland. It was published in 1996 in English translation by Martin Regal. At the same stall I found a first edition hardcover with dust jacket of Ripples from Iceland by Amalia Líndal from 1962. I decided not to buy it since I had already read the book, and the 1987 reprint with an added epilogue at that. It cost the equivalent of thirty dollars, expensive for a book that I had already read, so I let it go.