On Monday Mark and I visited two music stores and got our fill of Icelandic music. Neither of us went into any music store during our day trip to Reykjavík two years ago so our first step inside was going to be exciting for both of us.

I keep my eye on European music, and I also read the Billboard album charts religiously. So I am aware of the contemporary music scene in Iceland and who has albums released in Canada. Reykjavík is postered citywide promoting the new Of Monsters And Men album. Mark was curious about this band but I told him he could get Canadian pressings of their CDs for a fraction of the 3111 ISK price. Most new CD’s sell for this standard price, which is just under $30 CAD. That is not unusual at all for any new CD in Europe.

We heard almost twenty different composers at the “Pearls of Icelandic Song” concert at Harpa. That concert provided an excellent opportunity to introduce listeners to new music, and one composer whose work was featured was Jón Leifs. I looked for his CD’s and bought two. I also got “Ragnheiður”, an Icelandic opera, a CD of Christmas carols sung in Icelandic by Hamrahliðarkorinn, plus a CD of folk songs and one by Voces Thules, a choir with songs inspired by the Battle of Iceland in 1238.

I found the only second-hand bookstore in the city and when I walked in I didn’t know if I would like the shopping experience. When you step inside you see boxes of books piled high. Nothing looked to be in order. I had found out about this place by asking the staff at the main Eymundsson bookstore. They warned me about it–telling me it would be a very “interesting” experience and that the place was run by an eccentric father and his son. I have been to plenty of bookstores like this yet the carpet of dust everywhere turned my stomach. I really do feel nauseous–to the point where my stomach feels as if it wants to empty itself out of either orifice–when I breathe in so much dust.

My favourite section in any bookstore is the languages area. This bookstore had its dictionaries and grammars right at the entrance. I enjoyed poring over the old selection of Icelandic books and multilingual dictionaries, but didn’t like moving stacks of boxes of books in order to get at the language bookshelves behind them. There is a charm in some ways of having to do this; I will chalk it up to the shared eccentricity I in fact share with the store owners. I’d move stacks of books to get to the hidden treasures. However I do draw the line when the browsing and shopping experience becomes more of a sweaty chore where I feel more like an unpaid mover than an excited customer. After a while I just said to hell with it, I’m not moving any more boxes.

There was a large section on Iceland itself, and I bought two books: one about Surtsey (published fifty years ago) and one on the volcano eruption on Heimaey, where we will be visiting. I work in a library where we have National Geographic donations coming out of our ears. We do not need more of them! So I see the irony in that I actually bought two issues of this magazine. I saw a box filled with issues from the sixties. I was looking for the two issues published about Tristan da Cunha. One issue featured a story about the volcano that erupted in late 1961 and the other issue told the story about the Tristanians’ return to the island after a year and a half in exile in England. I have read both stories, but it would be nice to have the actual issues. I did not find either issue in the box but I did find two magazines that covered the Surtsey eruption and the Heimaey eruption! I had to pick them up, since they were stories about Iceland and here I was in Iceland and about to visit or see both islands. I have to chuckle (as well as roll my eyes) that I paid 150 ISK for each issue.

Today by the time I post this it will be past midnight and thus it will be Dominion Day in Canada. I will write a travelogue about our last day in Reykjavík and our drive across the island from south to north to the town of Akureyri, where I am now. On the way to Akureyri, we took a detour to visit Þingvellir National Park (the first letter in the first word is a thorn), the site of the first Icelandic parliament. Since it is very late and I am extremely tired, I will post about the drive to Akureyri, the absence of roadside barriers, the violent wind, the “fjord deltas”, the snowy mountains and mist, and also talk about whatever I do on July 1 in Akureyri. In the meantime, I am attaching a few photos of Mark and me at Þingvellir. 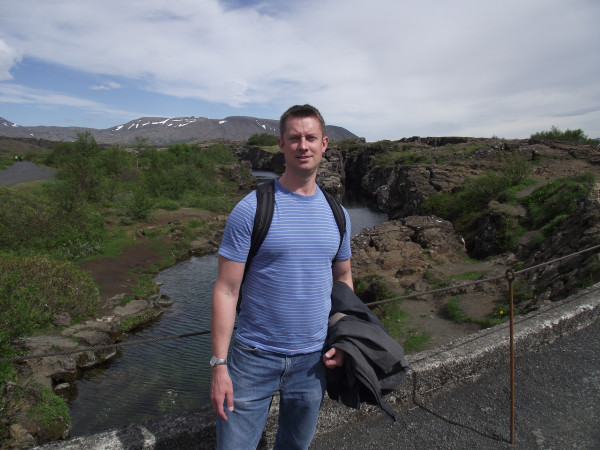 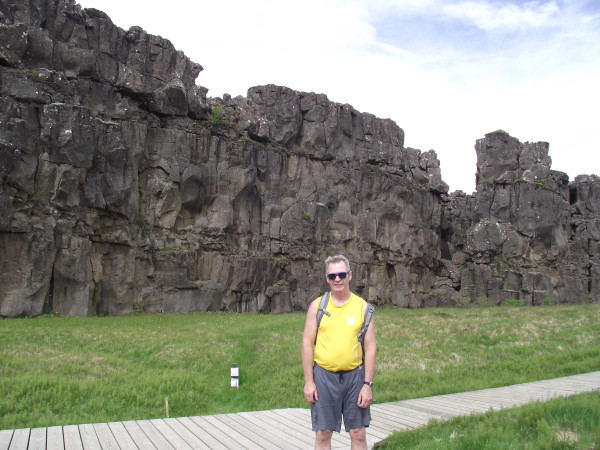 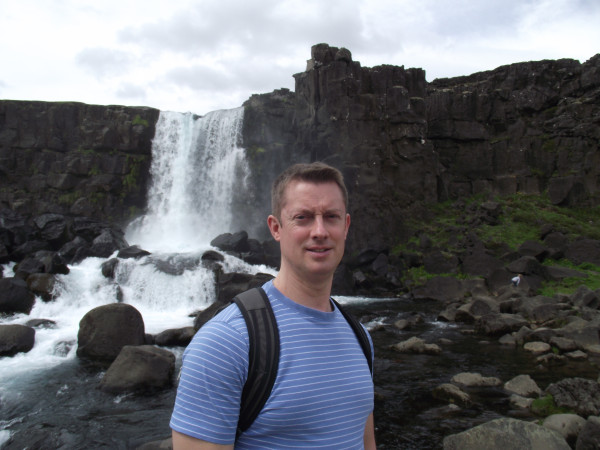