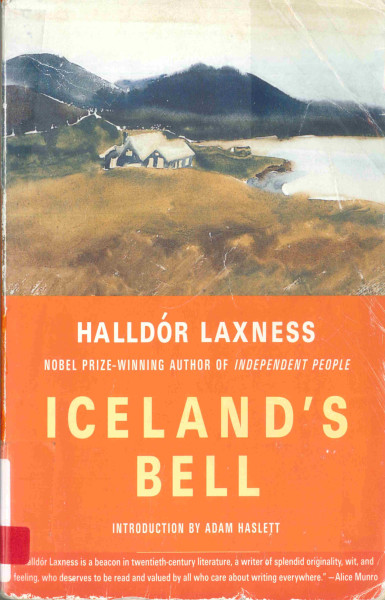 The novels of Nobel Laureate Halldór Laxness are all over Iceland. I would expect to see them front and centre in all of Iceland’s bookstores and the colourful Vintage paperback editions of the English translations are certainly pleasing to the eye. I vowed to read Halldór’s works when I got home. My library system, however, only had one novel in its collection, Iceland’s Bell. I ordered his classic, Independent People, when I got home.

Iceland’s Bell (translated by Philip Roughton) is told in three parts, and has a strong saga feel to it. The sagas–especially Njal’s Saga, which I own–seem to have influenced Halldór. The overall sagalike feel to this story encompasses superhuman feats of strength and stamina, and gestures of island-encompassing influence. Executions such as beheadings and hangings were a normal part of meting out justice in the late 1600’s when the story takes place, and one could expect to witness such executions at a regular routine outing. Halldór must have been smiling to himself as he wrote the following passages where a young woman’s presence as a witness was not always guaranteed:

“‘Oh, please say that you’ll let me see men killed, papa dear,’ whined the girl. ‘Or maybe you don’t love me?'”He consented to take her to see the gallows on the condition that she go straight to bed afterward.”

And at the chance to meet a man served with a death sentence:

“‘Oh, I would like to see him,’ said the damsel, and her face brightened. ‘I would really like to see a man who is going to be beheaded in the morning.'”

This sly humour is typical Halldór; the reader is left shocked but laughing at the same time. The one most concerned with losing his head is the protagonist Jón Hreggviðsson, whose initial crime of stealing cord, or fishing line, sends him on a journey lasting twenty years where he skirts the law after being found guilty on a trumped-up murder charge. Jón survives long series of torture and repeated death sentences. Atlantic crossings take Jón to Germany and Denmark where he ends up in the same dire predicaments, imprisoned and tortured and barely able to stay alive. But Jón is the immortal superman, and what would kill a normal man is water off Jón’s eider duck back, and he emerges from dark isolation no worse for wear, often with a snappy one-liner once he is released.

The rest of Europe, especially Denmark, which ruled over Iceland at the time, viewed its colonial island as a disease-ridden, lice-infested outpost:

“In any case, it had never been of great advantage to advancement, and hence was not much of a temptation for the finest men in Denmark, to trouble oneself concerning that outpost of the Danish realm, that remote ulcer in the shape of a country whose name alone, Iceland, could nauseate any man in Copenhagen, even if everyone knew that from that country ran the whale oil that fed the lamps of their city.”

Halldór could add a stereotypical description about Icelanders or a quotation that would make me laugh out loud. It felt as if I was reading a 21st-century version of a millennium-old saga in the way Jón would react, almost as if he was addressing the camera with a wink and accompanying smirk, breaking the fourth wall. Halldór was well familiar with outsiders’ impressions of his island, and played up this impression. Icelanders were the smelliest people imaginable and they were always drunk. Halldór’s descriptions of people’s reactions whenever a foul miasm wafted into a room sent a flurry of activity looking for the Icelanders. When Jón set off for Europe, Germans and Danes recoiled from the stench when he and his friends entered a saloon. Icelanders are described as having filthy habits, yet one cannot help but laugh at them–even with them–instead of feel nauseated by them:

“The skipper looked disapprovingly at this black-haired beggar who’d been reduced to such poor shape during his stay at Bessastaðir that he wouldn’t even do for shark bait.”

“His boots are scuffed and coming apart at the seams, about as ragged as one could expect in the land where everyone shared a single common distinctive feature: wretched shoes. He is apparently sober.”

“Jón Hreggviðsson scratched himself in likely as well as unlikely spots as he puzzled over this question, until he started to thread together an answer.”

Each of the three parts of Iceland’s Bell centres on different characters and themes, however they are all tied together. The obsessions of bibliomaniac Arnas Arnæus, the King of Denmark’s official antiquarian, left me rolling my eyes skyward. This bibliomaniac tore people’s pillows apart to examine the stuffing contents for crumpled up pieces of lost manuscripts.

Iceland’s Bell had a feel of nineteenth-century French literature in that the characters addressed each other by their full names all the time. No pronouns were used, so I was left thinking–often–that when a full name was used, other people had entered the conversation. I can understand Halldór’s repeated references to Jón Hreggviðsson by both of his names, since patronymics are not used alone, and since so many characters in the novel were also named Jón, the patronymic was essential. I wonder if this was intentional by Halldór, to make a statement about the limited selection of masculine Icelandic first names. I wouldn’t put it past Halldór, like the remark he makes about Copenhagen when the whole city went up in flames:

“The inhabitants of the city rushed panic-stricken out into the streets, much as in Iceland when loads of worms crawl out of rotten lumpfish when it’s grilled over the embers to give to the shepherd boys.”

Although written in 1943 about a time in history over three hundred years ago, Iceland’s Bell reads as if it was written only yesterday, with its thread of snarky wit running throughout its three parts. I acknowledge that this is the work of translator Roughton, who produced it in 2003. Halldór’s asides and observations seemed like screenplay notations, so perhaps Halldór had film aspirations for this work. Iceland’s Bell was a fine introduction to the work of the greatest writer to come from Iceland, Halldór Laxness.