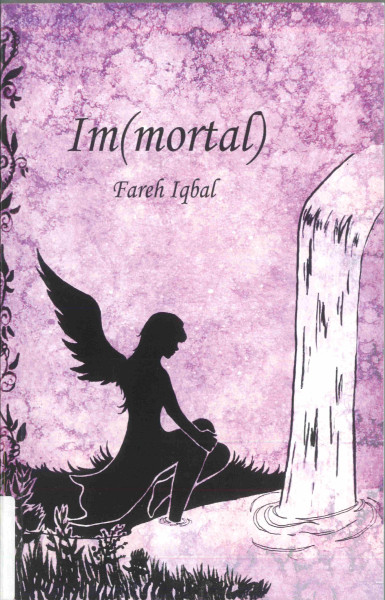 I am pleased to report that Fareh Iqbal has edited her third novel, Im(mortal). I posted my original review on 13 September 2016 and an edited reprint was produced a mere twelve days later. I am impressed that the author worked so speedily to issue a new edition. As I have stated in my past LiveJournal posts, I promise to remove my reviews of Iqbal’s books from all on-line fora and upload reviews that reflect the state of the current editions, but only provided that I know what the current editions are. I will not upload a revised review for a half-assed edit job when there is still work that needs to be done in all four novels (and work that has even been done for her by yours truly). I want to rave about these works, but will not laud new four-star praise when the edit job is left unfinished. Fix your books and earn the extra star.

The praise I had for Im(mortal) is found in the above link. This post is a report on the edits Iqbal has made. Any edits she has made are in red, while those errors she left in remain in black.

Im(mortal) was presented –for the most part– as edited text up to about the first half of the book. After several editorial gaffes in her first two novels I was optimistic that Iqbal may have had her third book formally edited. I can’t say that it was, for the following spelling errors or incorrect words belied an editor’s careful eyes:

–now changed to casualities, which, while not an error in itself, ought to be casualties.

–possessive form now corrected to Its.

Two errors befouled page 197: the misspelling moxy and the incorrect homophone in the line “Georgina attacked her poached egg severely, yoke spilling onto her plate.”

–Two errors now become three. Neither misspelling was corrected, yet the comma after severely is now missing, creating an awkward run-on. Iqbal appended the sentence to:

“Georgina attacked her poached egg severely yoke spilling onto her plate, a golden massacre.” which only makes the run-on more awkward since the sentence is now longer.

A reference to The Little Mermaid by [Hans Christian] Anderson (p. 246)

A flipflop between grey and gray. Iqbal preferred the former (as the colour features prominently in the term Grey Suit) yet the form gray occurred on pp. 4 and 248.

–The spelling is now grey throughout the text.

I noticed that Iqbal never used the hyphen when writing out numbers (which occurred frequently). She wrote twenty one and eighty three.

–I did not leave a page reference so I am not flipping pages to find if these were spelled to include the hyphen.

The errors I listed above could have been easily caught by an editor. One characteristic that continues in Iqbal’s writing is the run-on sentence or the overall absence or misuse of commas. I cite numerous examples where I had to reread the sentence and parse it myself in order to understand it:

“Turning to Stefen, her arms spread wide she twirled around the furniture until she was at the foot of the bookshelf.” (p. 66)

“We felt as though we finally had a purpose instead of wasting away we were finally useful.” (p. 93)

“Though Safe House was quite magnificent Sophie felt better breathing in the fresh air, it seemed her whole world was confined to the interior of Safe House and though it had only been a day she felt that she had aged many years.” (p. 214)

“Considering their recent truce, Sophie resisted the urge to tell Georgina she had no right to ask such a personal question, she bit down on her tongue, the words she wanted to say dying on her lips.” (p. 223)

None of the above run-on sentences were corrected.

And finally, I had to note the redundancies in the following passage:

“Her eyes raised skyward and took in the thirty foot ceiling above her head.” (p. 81)

One can convey everything about where her eyes were directed just by referring to a “thirty-foot ceiling”. I have to admit that this is one of my favourite examples of redundancy since I encountered She knelt on her knees in a text I read while in grade ten.