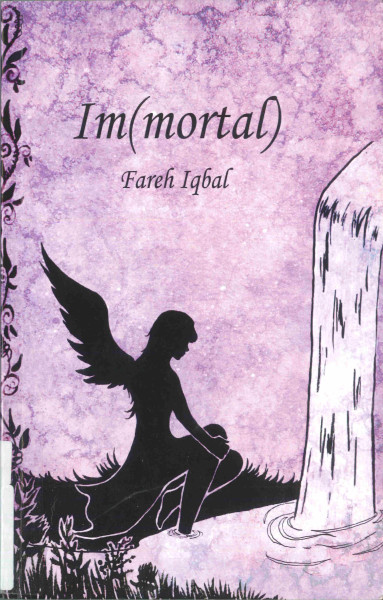 Im(mortal) is the third novel by Fareh Iqbal. It tells the story of Sophie Crawford, a good friend of Franchesca Driftwood whom we met in The Bookkeeper’s Daughter. A job interview becomes an inquisition by mysterious people in colourful suits, and Sophie is transported suddenly into a dilemma where she must choose her fate. Will she choose a lifetime of youthful immortality, where she is also given the tempting gift of flight, or will she choose to live as a mortal person who has a life filled with love? Sophie is pulled in both directions and we never know what she will decide until the very end. Credit to Iqbal for not writing a predictable ending.

The first hundred pages of Im(mortal) kept me transfixed. I honestly did not want to part with this book as I travelled with Sophie from her faux UN interview to a mysterious Safe House populated by a shape-shifting catwoman and a dreamy man named Stefen who has the power to read minds. Im(mortal) is a romantic coming-of-age story told amidst a fantasy world of mystical powers and passion.

I felt this was Iqbal’s strongest story to date, and I found her gift for simile praiseworthy. Here are some examples I enjoyed rereading as I paused and took in what each description meant:

“A chair creaked and the clouds of smoke ceased, their wisps of gray mist evaporating in the air. Sophie wrinkled her nose distastefully at the acrid smell. It smelt like decaying candy.”

“She didn’t turn around, she didn’t trust herself to turn around and observe acutely how the sunlight played across his handsome features like an unholy dance of temptation.”

Iqbal could also grab my attention by a single line of her descriptive atmosphere. Consider the breaths and the smile in the following passages:

“The tall oak panels swung silently back into place all in the span of the three breaths Sophie hadn’t realized she had been holding.”

After I read that line, I wanted to reread it while holding my breath. And Iqbal painted a perfect picture of a smile that only went so far in its facial contortions:

“A shrill laugh cut through the air, ‘Oh, Sophie. You’re wearing heels? I couldn’t even tell. You’re still so short.’ Georgina said unkindly with a smile that didn’t quite reach her eyes.”

Im(mortal) was presented –for the most part– as edited text up to about the first half of the book. After several editorial gaffes in her first two novels I was optimistic that Iqbal may have had her third book formally edited. I can’t say that it was, for the following spelling errors or incorrect words belied an editor’s careful eyes:

Two errors befouled page 197: the misspelling moxy and the incorrect homophone in the line “Georgina attacked her poached egg severely, yoke spilling onto her plate.”

A reference to The Little Mermaid by [Hans Christian] Anderson (p. 246)

A flipflop between grey and gray. Iqbal preferred the former (as the colour features prominently in the term Grey Suit) yet the form gray occurred on pp. 4 and 248.

I noticed that Iqbal never used the hyphen when writing out numbers (which occurred frequently). She wrote twenty one and eighty three.

The errors I listed above could have been easily caught by an editor. One characteristic that continues in Iqbal’s writing is the run-on sentence or the overall absence or misuse of commas. I cite numerous examples where I had to reread the sentence and parse it myself in order to understand it:

“Turning to Stefen, her arms spread wide she twirled around the furniture until she was at the foot of the bookshelf.” (p. 66)

“We felt as though we finally had a purpose instead of wasting away we were finally useful.” (p. 93)

“Though Safe House was quite magnificent Sophie felt better breathing in the fresh air, it seemed her whole world was confined to the interior of Safe House and though it had only been a day she felt that she had aged many years.” (p. 214)

“Considering their recent truce, Sophie resisted the urge to tell Georgina she had no right to ask such a personal question, she bit down on her tongue, the words she wanted to say dying on her lips.” (p. 223)

And finally, I had to note the redundancies in the following passage:

“Her eyes raised skyward and took in the thirty foot ceiling above her head.” (p. 81)

One can convey everything about where her eyes were directed just by referring to a “thirty-foot ceiling”.

Iqbal has written four novels to date. I will soon read the fourth to complete the Iqbal oeuvre.