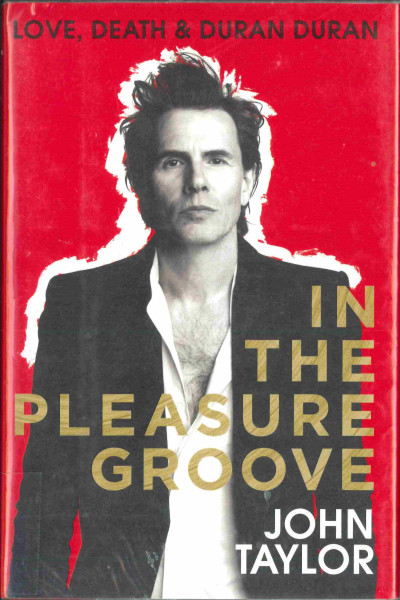 I am a huge fan of Duran Duran, as readers of LiveJournal know. I have thirty years of their records, seen them in concert three times, interviewed Roger Taylor for the Toronto Star and even posted a book review of a band biography here. Thus when I heard about bassist John Taylor’s memoir, I wanted to read it. In the Pleasure Groove: Love, Death & Duran Duran is Taylor’s story (written with Tom Sykes) about growing up in Birmingham and forming Duran Duran with Nick Rhodes and Roger Taylor. It was indeed a speedy read, with 74 short chapters spread out over 392 pages, so there was always time to read a few pages more. Taylor kept his own diaries from before the founding of Duran Duran, so he relied on his actual writings instead of rose-tinted nostalgic memories. Taylor fortunately did not dwell long on his early childhood, and made his earliest memories relevant as antecedents of major events that would occur much later in life. He also wrote journals during the Duran years and also during his time out of rehab, so he provided short yet valuable insights that were always in perspective.

Taylor, whose birth name is Nigel John Taylor, used his real first name up until the start of Duran Duran. He decided to change it and go by John:

“It was more than just taking a stage name. I needed to reinvent myself. Not be Mom and Dad’s son. I didn’t want to be called Nigel by anybody; the band, my friends, my family. It would take Mom years to get with the John plan.”

Taylor may have had the reputation of being Duran Duran’s most popular member, always leading the other four in decibels from the scream factor. Although he could have any girl he wanted, insecurity kept him from using his natural charms to ask women out, so he always supplemented his style with booze and drugs. Once he was tripping on cocaine, Taylor wrote that he could just wink and raise his eyebrows and he could be in bed with any woman in half an hour. Yet now that he is clean, he no longer needs a crutch of self-confidence, whether that is drugs, alcohol or a new name:

“If I had had a greater vision for myself, I would have kept Nigel and been the only Nigel in a music business crowded with Johns and Johnnies. But I wasn’t that confident.”

Duran Duran has lasted for over thirty years because of many factors, one of which is the decision by the band members to credit songwriting with all five members’ names:

“It gave us all an equal stake in the band, and we each had to respect the others. It’s the reason we are still together today.”

Taylor takes the reader on tour and into the recording studio and to video sets. I especially liked the local reference to the Duran Duran concerts in Toronto in 1984, where they shot the footage that would eventually become the live video for “The Reflex”. I was at one of those shows at Maple Leaf Gardens. Taylor also spent a chapter discussing the decision to remix “The Reflex”, which he felt was necessary in order to make it a hit single. Duran Duran’s work has stood the test of time, and I can’t agree more when he asserts:

“Rio was a masterpiece.”

I could have drunk in a lot more than the three- and four-page chapters, and I was disappointed whenever I turned the page and found the first page of the subsequent chapter facing me. As a diarist myself, I appreciated Taylor’s candour in facing his truths by not sugar-coating his boozy and druggy past. One must face one’s past in recovery, and Taylor realizes that recovery is an ongoing process. Denial of the truth is one step closer to falling off the wagon. None of Taylor’s reminiscences had the air of sensational exaggeration, and his depression, sleeping around and drug scoring all seemed entirely real. When Taylor’s own source material was his personal diary, he just wrote about what he knew, although I would have liked a longer book with fleshed-out chapters. In the last chapters he talked about the death of his mother and father. It was quite sad to read about the passing of Mr. Taylor, who lost the will to live after his wife died. His increasing forgetfulness and dementia struck me as I recalled the decline of my own maternal grandmother.

Now in his early fifties, Taylor is married with one daughter and two stepchildren. He is very happy to be part of a reunited Duran Duran, “the reunion of the snake” as he calls it.