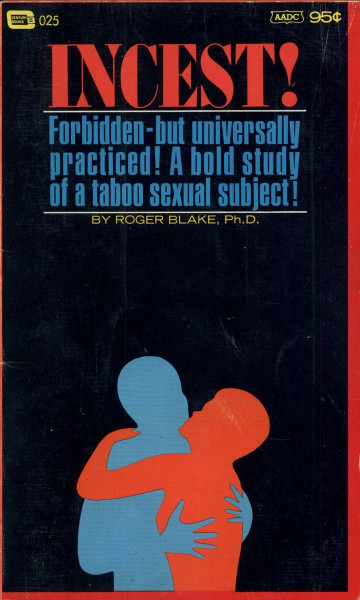 Incest: A Psycho-Behavioral Study by Roger Blake is the latest sexual exploitation book I will be parting with. It was one of four such books donated at the old Mississauga Central Library (which closed in 1991) which we rejected. Since then I have had these four books, as well as one other, decorating my house as bookshelf wallpaper. I don’t get my kicks reading this sort of thing yet I admit to acquiring them primarily because of their flashy and scandalous titles. I’d pepper my very vanilla shelves with some ribaldry (and you can always find a library in ribaldry). Six years ago I finally read Lesbian Masochist, because books are meant to be read, not to have their flashy spines shown off, while two months ago I read (and later parted with) Deviation: A Study of Abnormal Love and Delinquent Delights. My latest literary wanker is about incest. Even though the front cover and spine give the title as Incest!, there is no such exclamatory drama on the formal title page.

This book, from 1967, almost drove me to sleep in its opening chapter. That was the technical foreplay. Boring and pseudo-scientific, it was the beard meant to disguise the pornographic case studies that were to follow. All semblance of legitimacy went out the window when Blake introduced the testimony of psychiatrist Dr. Frank Caprio, then misspelled his name as Caprico a mere three lines later.

I cannot write a formal review for a jerk-off book, but I can quote some ridiculous passages. Blake, worried that the foul language in his subjects’ testimonies might offend his readers, populated his book with f— and s—. Nonetheless, we can all tell what those two four-letter words are:

“…we will be forced to make liberal use of the aposiopetic dash to retain the flavor of his speech without using language that might be offensive to some.”

Like dad screwing around with his youngest daughter is supposed to be less offensive.

I learned two new words in this book. The first was pedicate. Until I looked it up I thought it involved penetration by the big toe. Blake also taught me tarriwags, although the meaning seemed pretty obvious by its appearance and context. This book was filled with sexual stereotypes, one of them involving pedagogical education and sexual prowess:

“The interesting aftermath of this story is that the man, although poorly educated and in a routine job, is known by many upper-class women as an extraordinary lover.”

In the chapter entitled “Sibling Relations in Adulthood”, Blake writes:

“A well-known actress put it in a recent exposé story in a national publication: ‘I’ve been around a lot in this crazy world. I’ve been to bed with a lot of men. I’ve been married several times. I always go back to my brother. Nobody can make love like him.'”

Now we all wanna know: which “well-known” actress is this?

Some of the chapter titles were a riot: “Marital Incompatibility Due to Husband’s Love of His Sister”, “Adult Lesbian ‘Marriage’ Between Sisters”, “Sexual Precocity Toward a Grandmother by a Teenage Youth”, “Debauchement of Minors by Aunt and Uncle with Father’s Consent and Participation”. Each case study was followed by a “psychological comment” or a “psychiatric comment” plus one “phychiatric comment”. This book was littered with spelling errors, which made everything about it seem so laughable. These comments were short and were immediately followed by lurid chapter titles which were meant to keep you reading. And I suppose I am continuing to read this stuff. I have decided to read my final sexual exploitation library reject next, thereby clearing out a bit more bookshelf space.