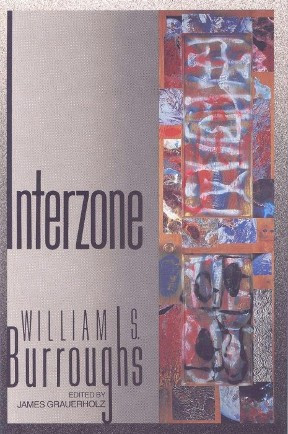 Interzone was the working title for William S. Burroughs’s most famous novel, Naked Lunch. The title has also been used to refer to this 1989 collection of short stories and other Burroughs odds and sods. I have had Interzone in my collection for at least 23 years, yet never read it until now. My grand clear-the-shelves project, where I give away my books after I read them in order to make space for others, is nearing its end. Now that I have read Interzone, there are only about five that I plan to toss when I get around to reading them.

Burroughs can certainly write a flowing short story, one where the pages seem to turn themselves. I enjoyed the short story section best of all. I am a squeamish reader when it comes to any depictions of bodily mutilation. The worst reading experience I ever had in this regard was getting through all of American Psycho. I have to confess that I felt faint while reading the short story entitled “The Finger”, wherein Burroughs described how he chopped off the tip of his little finger with poultry shears. This was at the lowest point of his drug addictions and emotional state, as he mutilated himself in his attempt to impress a future male lover.

I do like Burroughs’s imagery, and two remarks he made about the living dead gave me a chuckle. Both are from the second section entitled Lee’s Journals:

“Morton said to me: ‘How long were you in medical school before they found out you weren’t a corpse?'”

“Foster, one of my anthropology friends in Mexico, died of bulbar polio. ‘He was dead when he walked in the door,’ the doctor at the hospital said later. ‘I felt like telling him, “Why don’t you check straight into a funeral parlor, pick your coffin and climb into it? You’ve got just about time.”‘

In 1984 the original manuscript for Interzone or Naked Lunch which was believed to be lost was found among Allen Ginsberg’s papers at Columbia University. One sizable chunk that had been cut from the eventual publication of Naked Lunch was the sixty-page long rambling set of words entitled, fittingly, WORD (all in capitals). The editorial advice to delete WORD from the eventual manuscript of Naked Lunch was wise, as it is nothing but an incoherent mumbling of ungrammatical phrases from a closeted queer high on horse. James Grauerholz, the editor of Interzone, described WORD as “the longest and most unusual section” as well as “a manic, surreal, willfully disgusting and violently purgative regurgitation of seemingly random images” and a “profane, first-person sibylline word salad”. I found it to be totally unreadable, a chore that took me hours which no amount of rereading could clarify. What do you expect from a guy whose sole preoccupation is finding a vein? Burroughs has always used scatological (in its original, Greek-derived sense) and phallic imagery throughout his work and WORD was swimming in it. WORD was tiring, and literally put me to sleep in frustration several times.

For readers of Burroughs who are interested in learning more about the evolution of the writer, Grauerholz makes the following assessment at the end of the introduction:

“This book is meant to portray the development of Burroughs’ mature writing style, and to present a selection of vintage Burroughs from the mid-1950s–a kind of writing he can no more repeat than he can once again be forty-four years old in Tangier. The willfully outrageous tone of voice represents the exorcism of his four decades of oppressive sexual and social conditioning, and his closely-observed experience of mankind’s inexhaustible ugliness and ignorance. Only by dispensing with any concept of ‘bad taste’ or self-repression could he liberate his writing instrument to explore the landscapes of Earth and Space in his work written over the following thirty years. Reading Interzone, you are present at the beginning.”