Is That a Word? From AA to ZZZ, the Weird and Wonderful Language of SCRABBLE® 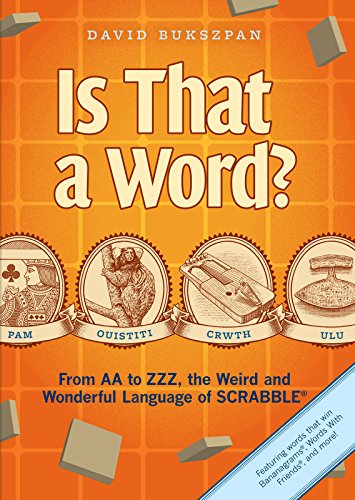 Is That a Word? From AA to ZZZ, the Weird and Wonderful Language of SCRABBLE® by David Bukszpan was a homorous take on the quirky lexicon of Scrabble. Since I am a Club and Tournament player I know very well what Bukszpan was writing about and in a book like this, where knowing how to spell words correctly is the object of the game, you can’t afford to print typos. Oddball words they may be, yet they are a second language to me, and while a casual reader about the game of Scrabble might not be able to tell if such a word was misspelled or not, I can spot a misspelled dorky Scrabble word in a second. Bukszpan’s book was full of them. It is an embarrassment that I had to take note of so many. Bukszpan had the official Scrabble word sources at his disposal, and even cited definitions from them verbatim. I can only blame sloppiness and poor editing for all the mistakes within. Let’s start with the Acknowledgments page, where he misspelled the first name of Word Freak author Stefan Fatsis as Stephen. He did get it right later in the book but then flipflopped back to Stephen. To add further insult to members of the Scrabble royal family, he got Joel Wapnick’s name wrong on p. 112 (misspelling it as Watnick) but fixt it in the end Sources section.

I wonder who in the competitive Scrabble community Bukszpan was talking to or what books he was reading to come up with this:

No one in the competitive Scrabble community calls a word that covers two triple-word-score squares a double-triple. A word that spans two premium red squares is known as a triple-triple. Its score is multiplied by nine, so it may also be called a nine-timer. A double-triple (a term which I have heard) only applies in the most unlikely of cases where a player misses the centre star on his first play and his opponent allows the word to stay on the board to enable his own placement of a word to cover the star and a red triple-word-score square. That is a double-triple and they never happen.

Bukszpan gave a list of the highest-scoring two-letter words yet limited the list just to words utilizing the five unique tiles, JKQXZ. Two-letter words that have a K (at the time of publication, only ka and ki were acceptable) score merely six points each, whereas three other words: by, hm and my each score seven. None of those even needs one of the five unique tiles to score higher.

The author ended the book with cutesy stories and tongue twisters to highlight each letter of the alphabet. I am such a Scrabble nerd that I did not need to read the accompanying vocabulary lists to decipher what the stories meant. I liked that he employed a good illustrator, David Hopkins, to draw dozens of Scrabblish terms such as a hoopoe, nailset and a teiid.

If the author wishes to correct his next edition, here are the locations for his spelling errors:

In listing words up to eight letters long that contain two X’s, Bukszpan included maxixe(s) and paxwax(es), yet forgot xerox(ed, ing, es), exotoxin(s) and exotoxic (p. 107). His anagram list of words containing AEEINRT omitted ARENITE from p. 114 but included it on p. 119; likewise his anagram list AEINRTU omitted RUINATE from p. 119. Some words have a myriad of alternate spellings. Bukszpan left out a few for tsuris, namely tsooris, tsouris and tzuris (p. 72) and for ganef he omitted ganev (p. 72). So call me a mamzer for having the chutzpah to kvetch yet I do find it funny that Bukszpan, who is Jewish, threw in kibbutz as an alternate spelling of kibitz (p. 72).