Island on Fire: The Extraordinary Story of a Forgotten Volcano That Changed the World 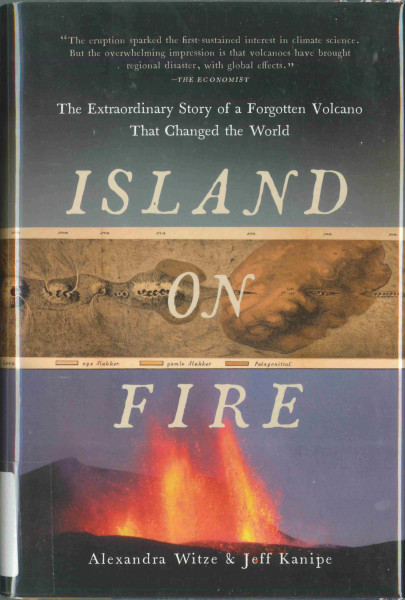 I process the new books in my department at the library and just days before I left for Iceland we received Island on Fire: The Extraordinary Story of a Forgotten Volcano That Changed the World by Alexandra Witze and Jeff Kanipe. The volcano in question is Laki, which erupted in Iceland in 1783. Since I was leaving on vacation in a matter of days I did not want to read it then, but started it the day after I got back. I saw Island on Fire for sale in Iceland’s bookstores, and knew it would be waiting for me when I got back. Now with the closing of all Black’s photography stores in a couple of weeks, I have worked like a maniac processing all of my, and Mark’s, photos before the company’s on-line photo processing website is shut down. All Black’s stores are closing on August 8 yet their photo processing website is scheduled to close two weeks before that, on July 24. I thus had only twelve days to edit close to two thousand photos, and have done nothing but editing since I got back. No gym, no Scrabble Club, no catching up on “Coronation Street”. With my photo processing preoccupying all my free time, I could only read during my lunch or dinner hours at work. Island on Fire was a fascinating book and I could have finished it in four days. Instead, it took me ten days to read it. I looked forward so much to my hour of reading each day at work.

Laki, unlike Krakatoa, seems to be, as the authors claim, a forgotten volcano. Laki erupted exactly one hundred years before Krakatoa, and a century can make a world of difference in the development of technology and the diffusion of news via transportation and media outlets. Iceland was still a sparsely inhabited island in the late eighteenth century and the eruption’s effects on the island may have gone unnoticed in the rest of the world, however, the effects on the European mainland were profound. When Laki erupted it blew a cloud of thick, dry fog all over Europe that obscured the sun and moon. The fog lingered for months, and rain could not dissipate it. The result was that in Europe in 1783, it was known as the summer without sun. While the sun shone like a dull rayless orb behind the dense haze, it still produced soaring temperatures:

“The heat blanketed northern, western and part of central Europe. A letter from Vienna, published in London’s Morning Herald in September, claimed that ‘we have experienced here the greatest heat ever remembered in this country’–as high as 31 degrees Celsius.”

The winter that followed produced its own extreme temperatures:

“In Vienna, Wolfgang Amadeus Mozart, who had just completed his Piano Concerto no. 14 in E-flat major, found himself distracted by the bitter cold. In a letter to his father dated 10 February 1784, he writes: ‘I have just one more question to ask, and this is, whether you are now having in Salzburg such unbearably cold weather as we are having here?'”

But that is nothing when compared to the effects the eruption suffered at home. Census figures show Iceland’s population in 1783 at 48.884, yet three years later this figure fell to 38.363, a loss of 22%. What killed ten thousand people? It was certainly not by the immediate consequences of the eruption. Lava flows, landslides and earthquakes did not kill so many people at once. What the authors claim is that the official cause of death–famine–may only be partially to blame. Fluorine poisoning, or fluorosis, may have been responsible for more human and animal deaths. The symptoms of fluorosis are haunting: weakening teeth and bones, bone deformities, inflamed and putrefied organs, gaping open sores, even the loss of the tongue. Animals grazed and ingested fluorine particles. No one could avoid fluorine getting into the water. The low dry haze was poison in the air and it was poisoning the population.

The authors devoted chapters to discussing the overall Icelandic volcanic record, including more famous (or notorious) volcanoes such as Hekla and Eyjafjallajökull. They also branched out and discussed other volcanoes that had cataclysmic effects throughout world history. They did not rely on eruptions that shook the earth only in the last two thousand years, but used the earth’s geological record to write about eruptions from millennia ago to show how the most violent volcanoes have rocked the world. Island on Fire also looked at the science of predicting volcanic activity and what we can do in advance of an eruption.

I shall be giving a photo presentation documenting my sixteen-day tour around Iceland at the Mississauga Central Library on Tuesday, September 29 from 7:00 to 8:30 p.m. in meeting room CL3. Please call 905.615.3500 extension 3589 to register. Admission is free but registration is required. Come see my photos of volcanoes, waterfalls, glaciers and the most beautiful green scenery on this remarkable island. 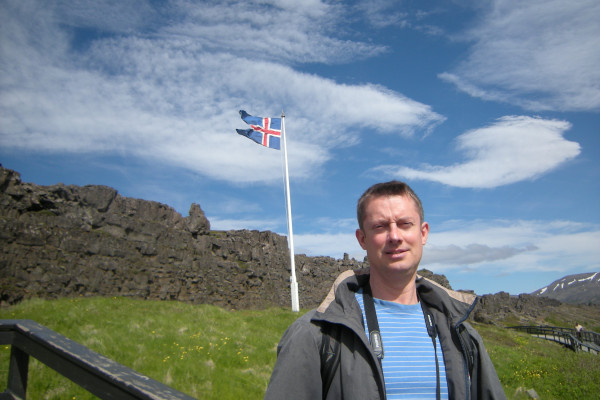