Islands Beyond the Horizon: The Life of Twenty of the World’s Most Remote Places 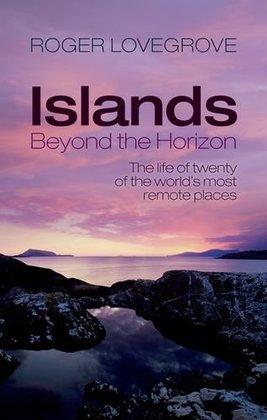 I love islands and insular cultures, so I was drawn to this new book in my library’s collection. Islands Beyond the Horizon: The Life of Twenty of the World’s Most Remote Places by Roger Lovegrove is right up my island alley in that it covers places that I have been to (Tristan da Cunha), places I want to visit (Jan Mayen) and places that I had never heard of and am altogether fascinated by (St. Kilda). Lovegrove talks about the islands’ history yet his main focus is on the environmental destruction that man has wrought on these islands. In every case man has destroyed these fragile environments either through active exploitation, such as whaling on the island of South Georgia, or through the supposedly noble and innocent action of establishing human settlement. In the case of Guam, as with most of the other islands covered in this book, man razed the native vegetation and alien plants were introduced. Native animals and birds perished under the new human invaders or under the foreign species they brought with them, such as rats, mice and cats. Late last year I wrote a review for another book about islands, Island: How Islands Transform the World by J. Edward Chamberlin, but the subject matter differs from Islands Beyond the Horizon, where the former deals specifically with the social and psychological aspects of insular cultures while Lovegrove’s focus is on island ecology. They are therefore found in completely different subject areas in the Sciences and Business Department.

Lovegrove visited all the islands in his book except the St. Peter and St. Paul Rocks off Brazil. They can’t even be called “islands”; they’re more like islets or, rather, just lumps of rock in the mid-Atlantic. So while he did in fact visit Tristan da Cunha, he made a couple of errors about the place. The island’s only settlement is formally known as Edinburgh of the Seven Seas, yet Lovegrove added annoying hyphens within the name. Gough Island lies 350 km outside the Tristan archipelago, not 180. I also found the metric conversions in parentheses to be a distraction, where every imperial measurement was immediately followed by its equivalent in metric. This destroyed the flow of the read every time, like coming across a roadblock immediately after starting to learn about somewhere new and exciting.

Islands which may have seemed to outsiders as providing an idyllic, castaway lifestyle had this reputation ruined once modern civilization stomped its way in. It doesn’t matter if life on these islands was in reality entirely opposite to this castaway myth, as outsiders’ impressions often trump local reality in the matters of worldwide reputation. This is perhaps most evident on Tristan da Cunha when the islanders returned from their two-year exile in England following the volcanic eruption:

“On Tristan da Cunha the same seven family names occur as they did before the enforced evacuation when the volcano unexpectedly exploded in 1961, but their life style now is dramatically different. Every cottage has electricity, the hospital is modernized, visitor accommodation has been built, and a policeman appointed. All these developments are clearly beneficial but reliance on a cash economy, increasing numbers of motor vehicles (with almost nowhere to drive) and the introduction of income tax make me wonder if any of the older inhabitants hanker for the days of slower life, bullock carts as transport, oil lamps for lighting, and a community where everybody helped with whatever tasks were needed and payment was not part of the equation?”

Life on Tristan before the 1961 eruption was anything but easy, as research into Tristanian history will clearly show. However once the islanders were exposed to the modern conveniences of 1960’s Britain, upon their return to Tristan in 1963 they carried many of these mod cons back with them, and changed Tristanian resettlement history forever.

I was pleased to read of the successful programs to eradicate invasive species and to reestablish both native flora and fauna to some of these islands. The biggest success story is that of Ile aux Aigrettes, which lies less than a kilometre off the southeast coast of Mauritius. This islet of only 26 hectares had been overrun with introduced species of plants and animals, yet has been restored to its former glory of being rat-free. Any kind of eradication project of foreign species is a massive effort, yet the smaller the island, as in Ile aux Aigrettes, the better. Lovegrove wrote about the difficulties experienced on larger islands such as South Georgia, where, at 3528 km2, eradicating the rats over this vast area is compounded by the retreating glaciers, which gives the rats new opportunities to escape.

How people could have even established settlements on some of these faraway locations seems to defy belief, however if I seem to have no trouble getting my head around the colonization of Tristan–the most isolated inhabited island on the planet–then living anyplace else shouldn’t seem so outlandish in comparison. My intimate acquaintance with Tristan seems to make me lose perspective on how isolated it really is. Yet islands such as the St. Kilda archipelago, located 64 km northwest of the Scottish Outer Hebrides, supported very small communities, clinging to the sides of cliffs it seems, scourging for birds and their eggs. It was quite sad to read of the evacuation of the St. Kildan community to Scotland in 1930. The island community, numbering no more than 36, could not sustain itself and had to retreat to the bustle of Scotland in order to survive. I consider the loss of the St. Kildan community as tragic as the loss of a language or a bird species through extinction. Other island communities profiled in Islands Beyond the Horizon were abandoned many centuries before St. Kilda, often for reasons lost to time. My curiosity has been piqued by many of these islands that I had heretofore barely known anything about.