It Is About Islam: Exposing the Truth About ISIS, Al Qaeda, Iran, and the Caliphate 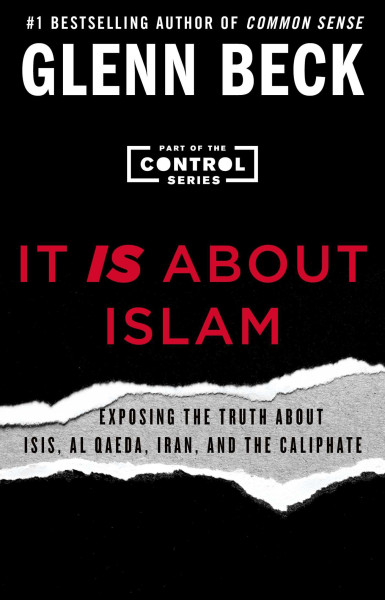 If protocol did not require titles of books to be written in italics, then the title of the book I just read would be rendered It Is About Islam: Exposing the Truth About ISIS, Al Qaeda, Iran, and the Caliphate by Glenn Beck. The second word is italicized and it creates a profound effect visually as well as when uttering the title aloud. Beck has written an alarmist sky-is-falling tale that defames Islam and condemns fundamental Muslims as terrorists. He stokes fear in all of us that no Muslim can be trusted, as anyone could be on a jihadist mission. I know who Beck is and whom he targets as his audience. I do not shy away from reading any subject or opinion and while I do not support the premise of this book, I do not keep my head in the sand that such alarmism exists.

Beck quotes from the Koran and hadith to support his views that Islam is a violent religion. Muslims–and ISIS–have support within the texts to kill nonbelievers, rape, stone women and homosexuals and destroy all traces of religions that are not part of Islam. The Koran might very well indeed say all this, but then if I read the Bible I would know that it wants me dead, many times over. I am a lusting abomination, after all. Reading all of Beck’s Islamic hysteria was overwhelming; an unstable person might regard this book as a manifesto to purge Islam at any cost to save Christianity (Beck’s religious right fundamentalist Christianity and his fellow Latter Day Saints, to be specific).

Christianity had the Crusades. Crazy people who call themselves Christians have murdered doctors who perform abortions. A Kentuckian county clerk refuses marriage licences to gay couples yet she herself committed adultery, gave birth out of wedlock and got divorced multiple times. In other words, even those who call themselves righteous can be blind to their own blatantly sinful behaviour. Beck does address the issue of the Crusades and the various sins within the Bible, yet comes back to a weak Obama-led government that panders to Islamist fundamentalists. He is worried that political correctness will be the death sentence to the (albeit severely flawed) document that is the American Constitution and its pretense of freedom of speech. Beck claims that Islamists want to return to the purest form of the religion from the time of the seventh century and will kill–and are in the process of killing–their way back fourteen centuries to get there. He makes the dramatic statement at the end that Islam will either have to reform itself or it will self-destruct. I don’t doubt that every religion has had to reform itself in some way over the centuries, yet I find it a ridiculous premise–that a lily-livered Beck espouses while shaking in his boots–that the United States is within a hair’s breadth of being overrun by ISIS if God-fearing Americans don’t do something about it now.

I do not feel like formulating an argument against a book like this. I don’t want to. I just read it to get Beck’s point of view but do not feel in the least inspired to write a review panning such foolish alarmism against an entire religion and its followers. Intelligent people know better.

EDIT: Of course, just what I expected, Amazon.com has rejected my review. Why, I’d like to know? You’d think my review was a rant against Islam. They won’t tell me specifics, just that my review contravenes their policy. I get the same kind of reply, or an extended d-e-l-a-y before my reviews go live, whenever I post anything with gay content, even including innocuous topics like an Andy Warhol biography.