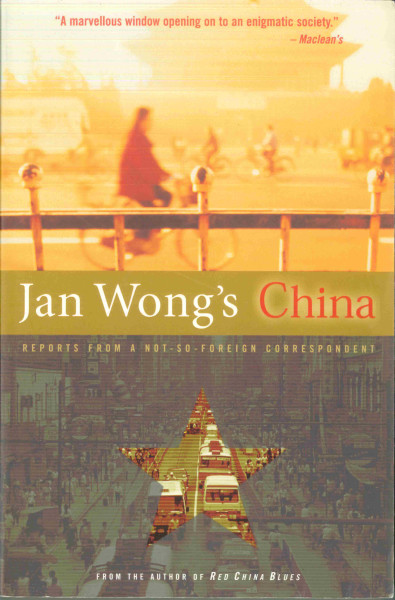 I love Jan Wong. Jan Wong’s China: Reports From a Not-So-Foreign Correspondent is her fourth title I have read. I started it a week before my holiday as I thought it could survive lengthy inactive gaps in reading. I was correct, as each chapter functions well independently. Over the course of my vacation I managed to read the book only on the five plane trips I took, and finished it on the flight home from Berlin. Within this book, originally published in 1999, Wong wrote about her time spent in the country earlier that year, and related it to her past experiences both as a student at Peking University during the Cultural Revolution and as the Globe and Mail‘s foreign correspondent based in Peking. She covered topics as diverse as Maoist westerners living in mainland China, opium addiction, homosexuality in PR China, the country’s one-child policy and the quirks of the PR Chinese postal system. As a fan of mail systems around the world, I particularly liked that chapter–and was again relieved after reading it that the mail I sent home from my trip there in 2011 actually got delivered.

Wong’s writing always elicits laughter and I burst into titters during each reading session. In her chapter on the inefficiencies of providing customer service in a socialist economy I laughed the most. The opening line of the chapter begins:

“Decades of socialist sloth had transformed Mao’s famous slogan, ‘Serve the People,’ into ‘Screw the People.'”

“Even though foreigners until recently were charged more for their airline tickets, the service was equally bad. These were the unfriendly skies of the Civil Aviation Administration of China, or CAAC, which some wag insisted stood for China Airlines Always Canceled. Its unofficial motto: Service with a snarl.”

Further complaints about the state of mainland China’s customer service were in the chapter about emerging capitalism:

“This was, after all, a populace scarred by decades of dealing with surly salesclerks who gave new meaning to the term, ‘hard sell.’ In state stores, even toothpaste was kept out of reach. If you wanted, say, a flashlight, clerks would slam two or three of them on the counter, then drum their fingers impatiently while you tried to figure out which one was least defective.”

Wong had insight into what ordinarily would be closed to foreigners and she freely admits that she could blend into the society. She also could make remarks, such as the ones above, with impunity. She befriended everyone from closeted gay men and lesbians to abortionists. Her observations and remarks often bit with wit. I still laugh out loud as I read and reread all the quotes I jotted down for this review.