What an experience we are having in northern Iceland. So much to do and no time to blog about it. That’s a good thing. Right now, as I start to write this at 12:34 a.m. on July 5, Mark and I have just returned from Jarðböðin Nature Baths in Mývatn: 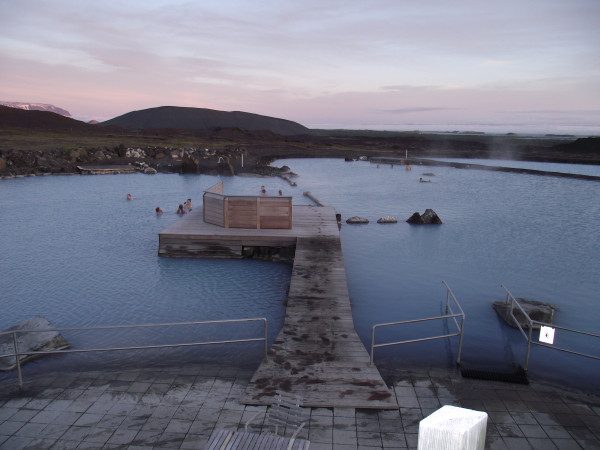 It was my first time ever in such a relaxing place. I have never been to the Blue Lagoon south of Reykjavík, but neither Mark nor I wanted to go there as we felt it was too touristy (as well as very expensive). We believed, as we had read, that the baths near Mývatn would be more geared to the locals. While this is true, and I did hear my fair share of Icelandic in the pools, I also heard English, French, German, Danish and Italian. The price was only 3700 ISK. After such a long day hiking around Lake Mývatn, we were aching–especially our hip area, as we did so much climbing. We also spent almost our entire time on the island of Grímsey climbing. Yes! We made it to Grímsey. I cannot wait to tell you all about that experience. All I will say, for now, is that I mailed all my birthday cards and postcards from Grímsey’s tiny post office, which is located inside the only store. The clerk hand-cancelled the stamps in front of me.

Now back to the Jarðböðin Nature Baths. We got in the water at 10:18 p.m. when it was 13.3°C outside, and stayed until 11:30 when the temperature had fallen to 10.8. Some areas of the pools were scalding hot. Yikes! Boiling hot! We quickly swam-walked over to a cooler area. The water was pale blue, and you couldn’t see your hand if you held it under more than 20 cm. The bottom was gritty black volcanic sand. What a way to relax after all that hiking. Yet it is now close to 1 a.m. and the sky is bright and neither Mark nor I is interested in going to bed yet. He’s writing in his travel diary book and I’m writing my travel diary blog. I know that if I wrote a proper full entry I would be up till 6 so I will just post a few photos and hope to get around to the commentary later, otherwise the blog will never see a new entry.

We headed to the town of Húsavík and Goðafoss waterfall after our flight to Grímsey was cancelled. Húsavík is northeast of Akureyri and is a former whaling town: 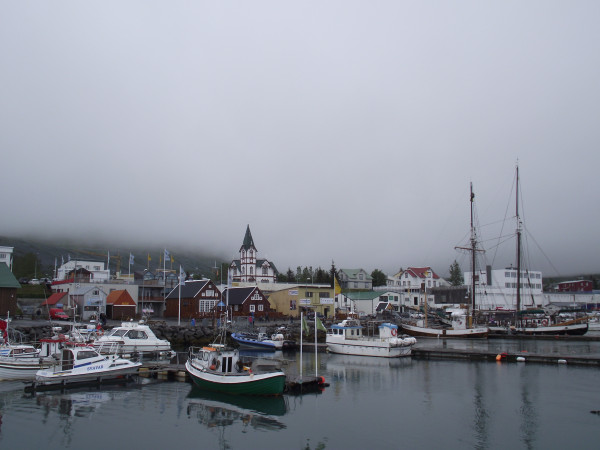 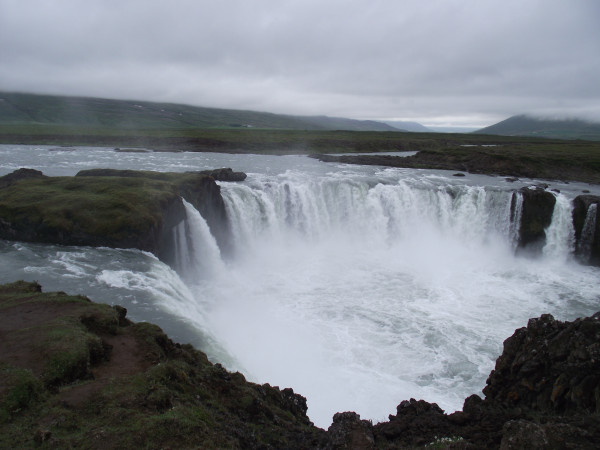 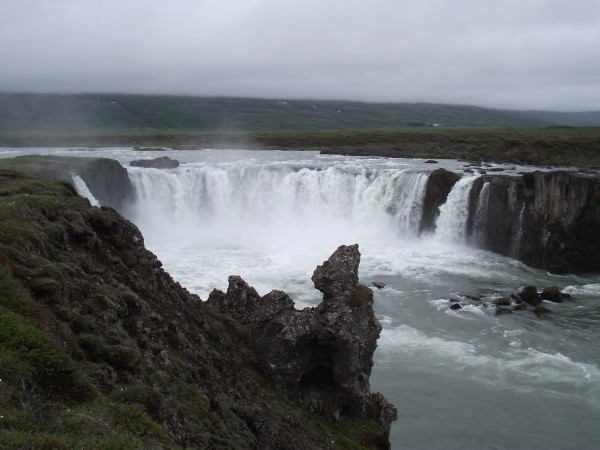 The adventure in getting to Grímsey began with us almost not getting there. I will save that story for another day. I will however not save all of the seasick stories that plagued the three-hour journey. I have never been on a boat ride with more vomiting passengers. Only 106 on board and the barf bags were filling up. I was occupying the sole men’s toilet (doing what comes naturally, not vomiting) when a poor young man, unable to get to the toilet, was barfing into the sole bathroom sink. He apologized profusely when I exited, then left to finish his business in the porcelain bucket. The sea was choppy all the way. It was brutal for these passengers, who had no choice but to s(t)ick it out for three solid hours of rough waves.

I will write a lot more about Grímsey in future posts. I took so many photos there that I won’t spend too much time deciding what ones to upload as it is now after 1 a.m. and I want to get to sleep. So I will write about our entire day hiking among the millions of midges in Lake Mývatn some other time.

Enjoy a few pictures of Iceland’s northernmost community, Grímsey. Forty km north of the mainland, and a population numbering around eighty.

Foggy arrival at 12:10 in Grímsey harbour: 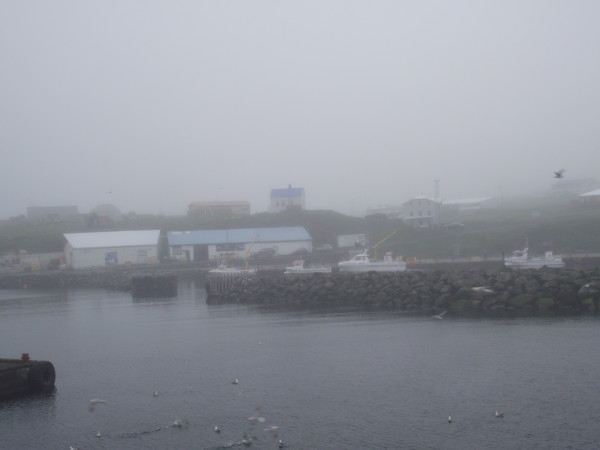 And I will leave it at that for your first taste of Grímsey. Good night, everybody!