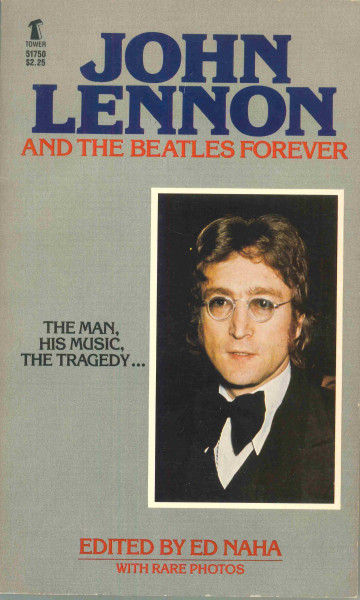 John Lennon & The Beatles Forever was a hastily published paperback following Lennon’s murder. I bought this–likely in early 1981–and never read it, until now. The publishing date was originally 1978, which applied to The Beatles Forever reprint, and the information inside, such as discographies and Beatle news, was not updated. The only new chapter was the first, which was about John’s murder. When I was fourteen I bought every Beatles or John Lennon book out there and wish I had left this one, priced $2.25, on the shelves. It was an awful book, overrun with spelling errors in its 166 pages. The facts themselves were accurate, as contributing authors Barbara Graustark and Lillian Roxon are well known in rock journalism, yet editor Ed Naha needs a good shaking for allowing all the mistakes and typographical glitches. In my opinion he never served as an editor at all.

I don’t know how one can make mistakes merely by listing song titles on Beatle and solo Beatle albums, but an editor would have caught them all. It was particularly annoying to see every reference to Sgt. Pepper’s Lonely Hearts Club Band with Sergeant spelled out in full. I filled two index cards with a laundry list of typos. For a Beatles history or the backstory behind Lennon’s murder, plenty of other material is available. This book would be wholly forgettable even if it was flawlessly edited, yet only deserves my attention for its notoriety as an error-filled eye-roller. It truly shows how slipshod it was compiled in an attempt to cash in on Lennon’s murder. I should not take such lightweight Beatles fluff so seriously. This book is better left tossed, and will not return to my Beatles bookshelf. Close to forty years after its publication, no one will care what the book is about or what I write about it. Yet here is the proof that editor Naha was asleep on the job:

Neal A. Armstong the astronaut. The author got both the first name and the surname wrong. (p. 6)

References always to John Donbar, the gallery owner where John met Yoko. His surname is Dunbar. (first occurrence on p. 41).

Klaus Voorman (p. 44, among others). In Beatles literature his surname is more often misspelled than spelled correctly as Voormann, I have found.

“…was de rigeur for the mid-fifties…” (photo caption)

References to both Astrid Kichener (photo caption) and Astrid Kirscherr (p. 64) when her surname is Kirchherr.

Every reference to the Beatles’ first single as “My Bonny” instead of “My Bonnie” (p. 68, among others)

References to Rory Storme (p. 75, among others) when the correct spelling of his surname is Storm.

“Today it is impossible to know what affect he would have had…” (p. 78). Sigh. The old affect/effect gremlin again.

References to Frank Field (p. 83, among others) when the correct surname is Ifield.

Awkward sentence “They broke every entertainment record that had ever had ever been made and were paid more money doing it as well.” (p. 89)

“…but even goods like to visit earth once a generation…” (p. 90; should be gods)

“…and Peter in turn suggeted…” (p. 99). In the same sentence Brian [Epstein] is referred to as brian.

“Lee and John Eastman were the Picasso laden, striped tie type she saw as the saviors of the Beatles.” (p. 107). She has no antecedent and I have no idea who this pronoun refers to.

“All contracts between Nema and the Beatles…” (p. 119). Should be NEMS, yet all other references are to Nems.

“The bank was accused of…” (photo caption). Should be band.

A reference to “Uncle Albert-Admiral Halsy” (p. 125). Should be “Uncle Albert/Admiral Halsey“. I would no longer list song title gaffes when the end-of-book discographies went crazy with what should have been simple cut-and-pastes. But no, there was title mistake after title mistake.

A reference to Henry McCulloch (p. 126) when his surname is McCullough.

A sentence that contained the wickedly incorrect choice of word “…Paul angrily began curtailing interview which death with either his personal life or his days as a Beatle.” (p. 127)

A reference to Capital Records (p. 140) while all other references are to Capitol.

In the Who Wrote What section of the Discography, in the author’s attempt to dissect which member of the Lennon/McCartney songwriting partnership was responsible for writing which song, “And I Love Her” was credited to John. It’s a Paul song.