A week ago today we lost Sir John Tavener, my favourite of all modern composers. I had first heard about Tavener through my love of the Beatles, as Tavener’s first two albums were released on the Apple label. When I started collecting the records of Apple artists other than the Beatles themselves, I was most curious about the classical works by Tavener. This was in 1982 and I was sixteen years old. I was a mop-head Beatles fan and also keenly interested in the works of the artists the Beatles had signed to their own label. Some of these artists went on to bigger careers after they left Apple, like James Taylor, and some only had successful careers while on the label, such as Mary Hopkin and Badfinger. John Tavener fell into the James Taylor category as his first two albums, The Whale and Celtic Requiem, sank without a trace shortly after their release in 1970 and 1971 respectively. As a teenager I wondered what on Earth the music on these two albums would be like; I had heard that either Ringo Starr or John Lennon had signed Tavener to the label. What turned Ringo or John on to John Tavener? I looked for Tavener’s albums in Toronto’s second-hand record shops, yet never found them. 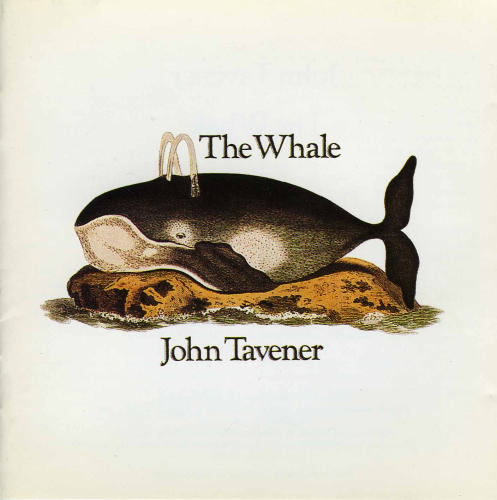 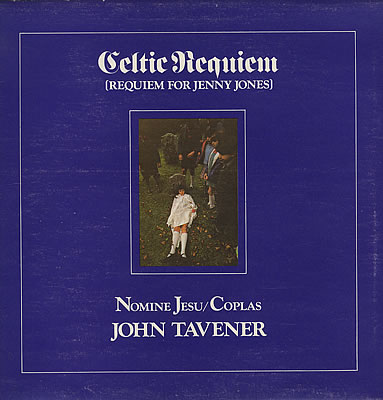 I wouldn’t have found his second album in a local shop anyway, as Celtic Requiem was and remains the rarest of all standard-release Apple albums. It was amazing it was released at all since his first album, The Whale, did not sell. Even then, Celtic Requiem was released only in England, which enhanced its rarity. Thirty years ago there was no Internet and no print Apple catalogue, so I had no idea what either album cover even looked like. I looked at every single LP in the bin in my attempts to find The Whale. I imagined what the cover would look like, and since we’re talking about an LP from 1970 I even imagined that the sleeve would be made out of a very thick cardboard, and the cover photo would be a bit glossy. I was influenced by the packaging of Yoko Ono’s album Fly, which I had recently acquired and was listening to nonstop.

When Ringo Starr rereleased The Whale on his own label, Ring O’Records, in 1977, I was surprised to find out how similar my imagined cover and the rereleased cover were: 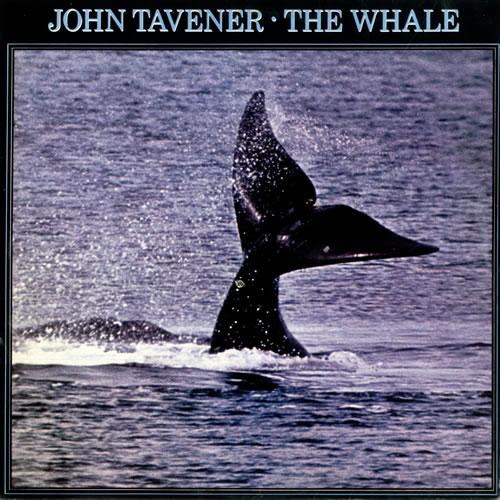 I didn’t come across the original The Whale until I attended a record show in Toronto and met a dealer who had access to sealed copies being kept in a warehouse in upstate New York. I ordered one–the price I seem to remember didn’t exceed ten dollars–and went over to his apartment to pick it up. It was unlike any classical record I had ever heard. While I was primarily a Beatles fan, classical music was not foreign to me, especially since I had appeared on my high school’s “Reach for the Top” team for two consecutive years where we were drilled on classical music and its composers. I used to take home classical LP’s from the library, back when we had a lending collection of vinyl.

The Whale starts out with the echoey voice of BBC news announcer Alvar Lidell reading from the Collier’s Encyclopedia entry for whales. “THE WHALE” booms from the speakers, pausing amidst echoes, then continues; “marine mammal of the order cetacea. They comprise three groups; one: archaeoceti…”. Slowly the music and voices grow louder and louder, eventually overpowering the encyclopedia narration. I listened to The Whale so often I had the entire encyclopedia entry memorized, and still do. This is a classical piece I continue to play regularly and always in its entirety, however I understand the vinyl recording is an abridgement of the original piece.

When Apple Records finally got around to releasing most of its non-Beatles artists on CD for the first time in 1991 (The Whale appeared in 1992) I was happy to be able to listen to the piece in its entirety without having to ruin the continuity by having to flip LP sides. By the way, both The Whale and Celtic Requiem made appearances in my own personal Top Ten albums chart.

These CD reissues soon went out of print, but Apple rereleased them again in 2010, packaging both Tavener albums onto one disc: 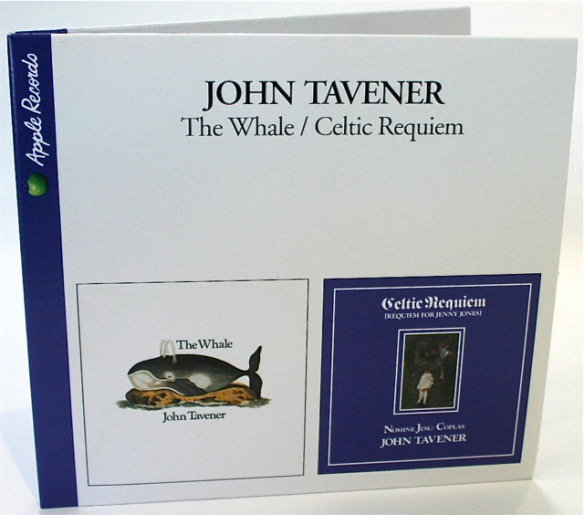 Tavener suffered from ill health all his adult life, and it sounds cruel for a fan to say that he never looked well in any of his promotional photographs. I followed Tavener’s career from the early eighties until his death, and I own several of his recordings such as The Protecting Veil, Ikon of Light and Thunder Entered Her.