Just My Type: A book about fonts 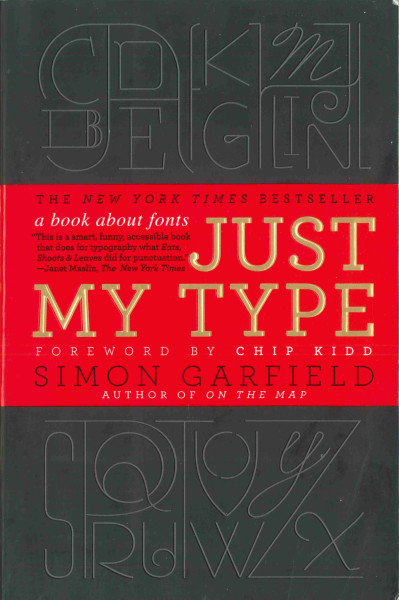 Just My Type: A book about fonts by Simon Garfield was a dream to read for typeface nerds like me. As Garfield states, a generation ago no one would have given a second thought to typefaces. Now with modern computing and word processing, everyone has dozens of types to choose from. People pay attention to the appearance of their work like never before. The biggest revelations in Just My Type were the dates when some of the most popular typefaces were invented. I had thought that some of them would have been invented only in the past thirty years, yet many of the most famous typefaces we use today are decades (more like a century) old. He also cleared up the difference between the terms typeface and font. A typeface is a style of letter design, like Times New Roman or Verdana. The font is the representation within the typeface, like letter size, boldface, serifs or italics.

Garfield, whose later On the Map: A Mind-Expanding Exploration of the Way the World Looks I reviewed last summer, asks a question at the beginning of the book that I certainly wondered about:

“Typefaces are now 560 years old. So when a Brit called Matthew Carter constructed Verdana and Georgia for the digital age in the 1990s, what could he possibly have been doing to an A or a B that had never been done before?”

Even type nerds gotta wonder about this. Why are there so many typefaces? How do they differ? Garfield discusses this in Just My Type, and his analyses and comparisons of individual letters were often filled with emotional, oftentimes maudlin, outbursts. I could tell that Garfield liked writing about typefaces even more than I liked reading about them. As seen in the above rendering, Garfield employed the font in question whenever he mentioned it. This did not make for a sloppy page design or a confusing read. The author supplied illustrations which were crucial to have with the descriptions. Unfortunately, he didn’t employ enough illustrations to the text. I found that the majority of the notes I took were not for quotes that I wanted to comment on, but references to typefaces that he discussed but did not show. Thus after I finished reading the book I was left with many unanswered questions about certain forms of type and why they should matter. For example, he referred to a Cheltenham typeface “capital A with a misaligned apex” that I would have liked to have seen while I was reading about it. I suppose the average reader would just take out his cellphone and look it up whereas readers such as me who don’t have the Internet on the go have to make notes to check stuff out later. Same for the Interstate g “that cuts off its bottom tail very early” and the Baskerville g with its “curled ear and its lower bowl left unclosed”. It would have been nice to see these letters as illustrations within the text.

It was interesting, as well as funny, to read about so many typeface anachronisms in modern films. Type nerds can tell if a movie is true to life by the typefaces it displays. All too often typeface is given no consideration at all. For example, a period film showing World War I army recruitment posters may display a typeface that wasn’t invented until the 1950’s.

Does your preference for a certain typeface reveal anything about you? Garfield raises the issue of personality types and typefaces, and I wonder where I would place on the Freudian font-o-meter. I prefer slim sans serif fonts, anything in condensed or narrow capitals. Garfield sums it up by saying:

“In fact, there seems to be something about type design that lends itself to philosophizing.”

to which I agree. Garfield wrote about the foundation of the Gutenberg printing press and the earliest printed books. In the late fifteenth century, printing was prone to many errors, and an English phrase originated in the inability of printers to keep their p’s and q’s apart:

“In his Vocabulary in French and English (c. 1480), Caxton or his compositor not only confused his ‘p’s and ‘q’s, but even more frequently muddled his ‘b’s and ‘d’s and his ‘u’s and ‘n’s, so similar did they appear in his small typefaces. The Vocabulary has so many misprints that you feel like writing in disgust to the publisher.”

Modern books about typography were also discussed, and I have my eyes on FontBook and A View of Early Typography Up to About 1600. I would love to read a 1916 study entitled Typographical Printing Surfaces by Lucien Alphonse Legros and John Cameron Grant on the optical adjustments that are required of a typeface to aid readability and achieve visually balanced characters. Fortunately I have found it on-line. Just My Type is another fascinating can’t-put-down read from Garfield.