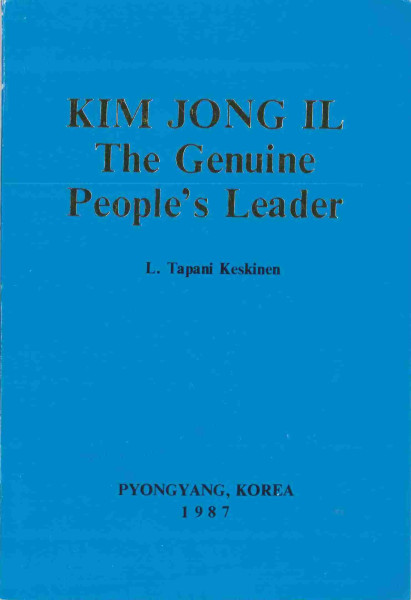 I came home from my 2011 trip to North Korea with dozens of books. My tour operators and fellow travellers wondered if I intended to read everything I bought. I knew it would take years to accomplish, even though many of the books were thin political tracts or slight biographies like this one featured. Kim Jong Il: The Genuine People’s Leader by L. Tapani Keskinen is a collection of laudatory episodes in the life of the Dear Leader Comrade General Kim Jong Il. Before I even get to the review of this book, which by the way is going to be identical to any of the other Kim hagiographies I have read, I have an issue with the alleged author. Although struck by the Finnish name and his reputed post as Director of the Board of the International Institute of the Juche Idea, I cannot see how this could possibly be an original English text, even if it was written by a Finn using English as a second (or third) language. The book states that the author wrote it in English, yet from my past experience reading North Korean works translated (poorly) from Korean into English, all of the same grammatical mistakes and verbosely overwrought sentences were in evidence. A Finn writing in English would not make the same errors as a Korean. I am compelled to draw the dramatic conclusion that Keskinen didn’t write this book at all. If he did, then it was heavily reedited by DPRK authorities. However I don’t think the authorities would have gone that far if they were only going to end up writing the book themselves. Thus I would go so far even to doubt the author’s existence (as well as his highfalutin Director position).

I have read a lot of work in English written by Finns, and nothing sounded as awkward as the single sentence below:

“The technology involving assignment of murderous work quotas based on high-speed photo-recording of work operations in one-hundredth or one-thousandth minute and binding workers to automatically moving machines, and automation introducing control of each moment’s work operations by automatic signal system and reducing workers to the slaves of machine, to be mentally deranged and crippled for all life–such technology and automation deserve to be cursed.”

I have no idea what that paragraph-length sentence even means. It reeks of a poor Korean translation. It is merely a sample of any text found in this work. I had to reread sentences, and often entire paragraphs, in order to understand what Keskinen was getting at.

The Genuine People’s Leader was brimming with examples where Secretary Kim Jong Il extended himself to make his people happier and healthier. He developed health spas, then diverted train tracks from the spa site so as not to disturb the de-stressing masses. He designed amusement parks, one of them “the biggest in the world” as a reward of recreation for his hard-working people. Keskinen, or rather the North Korean authors masquerading as him, portrayed Kim as a Christ-like figure, who has boundless love for his people. With sub-chapter titles such as “Everlasting Life” and “Taking Delight in the People Becoming Happier”, Kim is the benevolent and omniscient superman. The Changgwang Health Complex, which inspired the Dear Leader to divert those noisy train tracks around,

“is called another building born of Secretary Kim Jong Il’s love for the Korean people, an edifice of lasting value which owes him its proposal, planning, construction and name.”

It is standard in North Korean literature to attribute godlike qualities to its leaders. And if “Keskinen” hasn’t the temerity to actually compare Kim with Christ, he still grabs someone from the Bible whose benevolence and solicitude reincarnates itself in Kim:

“Now, thousands of years after such a deed of King Solomon was eulogized, people have come to see for the first time a true example of love and good government people can expect to enjoy actually as a man.”

Outranking Solomon, Kim Jong Il rivals none other than God Himself, apparently:

“There will be no leader of people in the world like Secretary Kim Jong Il who keeps the whole country awake at midnight to save human lives and creates miracles which put ‘God’ in the shade.”

Yes, “God” was in quotes in the original text, in an attempt to belittle the Almighty. The Christ-like qualities exhibited by Kim enable a disabled writer to continue with his work:

“His love and solicitude served as the elixir of life which instilled indomitable spirit and miraculous strength in the old sickly body of writer.”

The word “solicitude”, by the way, was used to excess throughout this book, as I encountered it sometimes multiple times on each page. The godlike comparisons increased by the end of the book, so every late chapter became an exercise in eye-rolling heavenward. To show that the writer in all likelihood was not a Finn writing in English but rather a North Korean not entirely skilled in the English language, I leave you with this:

“The Korean people lead a happy life, realizing all their desires to the full in his embrace of great love which evenly reaches all creatures over the world like warm sunshines.”