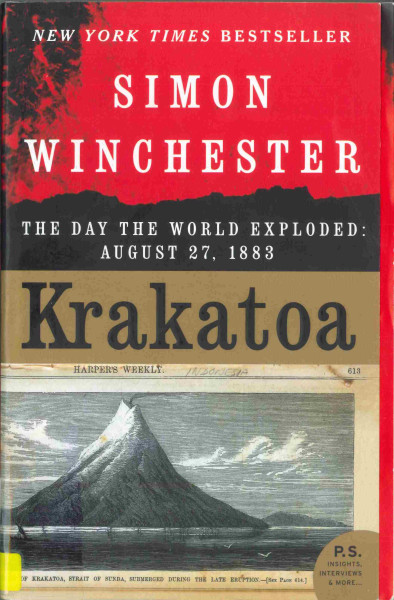 I thoroughly enjoy the work of Simon Winchester. For two of his other books, The Professor and the Madman: A Tale of Murder, Insanity, and the Making of the Oxford English Dictionary and Outposts: Journeys to the Surviving Relics of the British Empire I gave the top five-star rating at Amazon and I extend the same top rating to Krakatoa: The Day the World Exploded: August 27, 1883. This is typical Winchester: nonfiction that I cannot put down, full of interesting trivial footnotes and long sentences loaded with parenthetical asides and clauses separated by commas which did not require rereading in order to fully understand. I tend to reread such lengthy sentences if I have to pause and take in a non sequitur parenthetical aside, yet Winchester makes everything flow in a rapid stream. It is a quite readable oral style that makes me laugh, even if the subject matter is the volcano Krakatoa, which was responsible for the deaths of over 36.000 people.

The explosion of Krakatoa in 1883 has been called the worst volcanic eruption in modern history. Superlatives abound: it was the deadliest, loudest and expelled the most voluminous and wide-spreading spray of debris ever known. Winchester did not make the story prior to the eruption read like a boring airplane disaster movie, where you don’t care about anything except the plane crash (or earthquake, or shipwreck) that was about to happen. Before he described the eruption and its aftereffects, Winchester needed to paint a backstory about the region. He presented both lengthy, yet at all times engrossing and wholly fascinating histories of Dutch colonialism in Indonesia, the dawn of international telegraphic communications as well as the progressive evolution of the science of plate tectonics. I am sure other authors would have driven me to sleep with such a patient breakdown of that particularly new scientific discovery. Plate tectonics and all the crusty goings-on beneath the ocean floor were crafted into a page-turning read. Diagrams, photos and paintings enhanced the text. Winchester explained the science behind the eruption, and how the (former) volcanic island got that way.

What would you do if smoke started seeping through your floor? Prior to the eruption, the population on nearby islands reported the ground under their homes starting to smoke. I can recall reading about the volcanic eruption on Tristan da Cunha in 1961, when islanders reported seeing the ground crack and split open. The Tristanians did not have dirt floors, but these Indonesians did, and the tremors and smoking ground foretold the devastation to come. Here is one observation from a nineteenth century “met station”:

“He walked across to the observatory, noticing immediately that the needles and pens suspended by their cocoon-threads on his magnetic declinometer were ticking and trembling violently–not in the usual side-to-side sweeps that one might expect from an earthquake, but in a series of buzzing up-and-down motions that did not register properly on the paper rolling from the drum. The more he thought about it, the more he realized something odd: The vibrations were not so much being felt through his feet, as if they had emanated from somewhere deep in the earth; they were in fact being felt in the air. True, there were ground tremors, and buildings were shaking–this was self-evident. But most of the shaking was coming through the very atmosphere itself. And vibration of this kind was the very particular hallmark of an erupting volcano, not of the subterranean shaking of an earthquake.”

One aftereffect of a volcanic eruption on an island is a tsunami. In fact, several tsunamis. Abnormal wave movements were seen as far away as France; imagine the height and force of the waves at the epicentre. What I found haunting were Winchester’s descriptions of pumice with lava-encrusted human skeletons washing up onto the shores of east Africa. While colossal in its destruction not only of structures, animals and human life, the eruption also cost Krakatoa its own life: the explosion was so strong that it blew the island off the map.

The volcanic ash painted the sky and gave the world the most extraordinary sunsets. Winchester wrote about the universal rush for canvas and paints as backyard art studios sprung up, with their artists recording the posteruptive skies in colour, which photography at that time could not yet capture. I now am more than interested in finding these paintings to get a glimpse of what the night sky looked like.

In Krakatoa and the two other titles I have read so far, Winchester writes with an enthusiasm that tells the reader he had a great pleasure in researching and writing. I am most keen on reading other books in the Winchester oeuvre.