Last year I wrote about my unsuccessful search for a red vinyl edition of the Kroketti album by Ultra Bra.

Starting in the summer of 2017, Svart Records released all four of Ultra Bra’s original albums on vinyl for the first time, both on black vinyl and as a limited edition in colour. The first LP rerelease was for Kroketti, their 1997 second album. This is probably the fans’ favourite as it certainly is mine. During the group’s comeback tour in 2017, of which I attended two of the three concerts, they sang more songs from this album by far in comparison to the others.

Red Kroketti–limited to two hundred copies–had already been out for a few weeks before I arrived in Finland in early July for the second and third concerts of their comeback tour in Turku and Joensuu respectively. I looked for it, begged for it, always to find out from every record store I walked into that it was sold out. It was no surprise: this was an enormously popular album, the first to be rereleased on vinyl and in bright red, too. No wonder it sold out so fast. I arrived in Finland too late.

I never abandoned my hunt for it, and often checked international record websites and left alerts to notify me if one came up for sale.

One did, in early April. Still sealed, as per my preference!

A vendor in Finland and I corresponded and I purchased it on April 4. He mailed it on April 5, and gave me the tracking details. After a couple weeks I got impatient and wondered where it was. Surely it should be here by now! Under normal air conditions, yes it would. I was totally oblivious to how the coronavirus pandemic would be affecting international flights. My package remained at the Helsinki-Vantaa Airport for sixteen days (April 21) before leaving the country. This past Monday was a national holiday in Canada. It was a dismal long weekend as rain pelted us on Sunday and Monday. I opened my door to see how the rain was on Monday afternoon and there was my package! How could I have received a delivery on a holiday? The cardboard was soaking and I worried about the condition of the LP. I opened it very slowly, as I couldn’t rush in excitement under any circumstances since I was wearing a temporary plaster cast after suffering a minor cycling accident two days before which covered my right forearm. Fortunately the vendor packaged the album like a genuine vinyl collector would expect it to be: housed in a second plastic sleeve between two pieces of cardboard on each side. The rain had only spotted through one layer of cardboard. Kroketti was entirely dry. 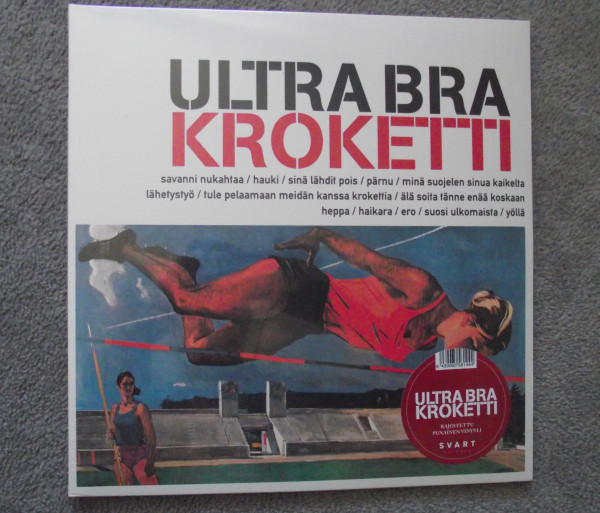 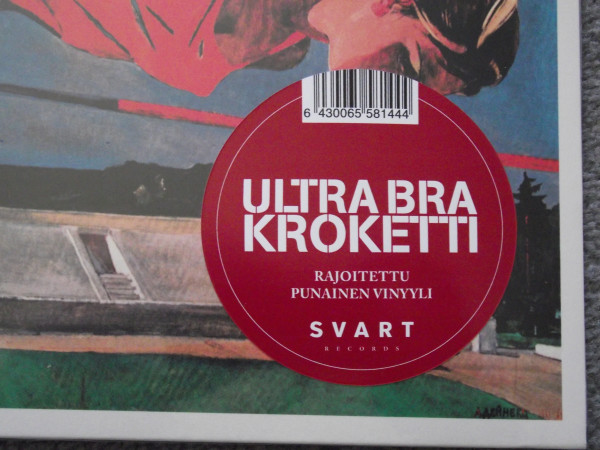 I now own all vinyl issues of the Ultra Bra albums: standard black, gold (issued to commemorate their December 2017 reunion concerts in Helsinki), and individually coloured (each album was issued in its own colour, limited to two hundred copies). I also have the variations of their two compilation double-albums on black and coloured vinyl as well. I can smile through the pain of my broken scaphoid!