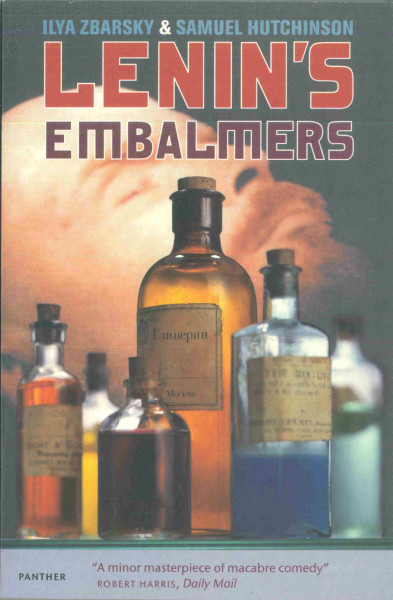 So I go from Lennon to Lenin with Lenin’s Embalmers by Ilya Zbarsky & Samuel Hutchinson (translated by Barbara Bray, who also translated Montaillou: Cathars and Catholics in a French village 1294-1324. My edition was published in 1999 but for the life of me I cannot remember how I acquired it. I think it was given to me–not as a formal wrapped-up present–but as a recommendation to read.

Zbarsky was among the team of embalmers who were assigned the task of preserving Lenin’s body for the long term. The very first team of embalmers had waited too long and some decomposition had already taken place. The team brought in to save Lenin’s corpse was Zbarsky’s father Boris and the project leader Professor (Vladimir) Vorobiov. Young Ilya, born in 1913, wouldn’t join his father and Professor Vorobiov until after his own formal education. And judging from his date of birth, he was indeed in his mid-eighties when he wrote this book.

Zbarsky had an insider’s view into the paranoid Stalinist regime from his childhood on. As part of the precious small team of scientists entrusted with the most intimate job of ensuring the bodily preservation of their government’s ideological founder, his family was given a large apartment and ample food. During the time under Stalin millions starved and lived in squalor. Everyone, no matter how vital to the Politburo or to Stalin personally, lived in fear of the purges and of being awakened by a knock on the door in the middle of the night. Zbarsky addressed why he and his father avoided this:

“Throughout our time there, my father and I were physically so close to the source of power that we might easily have been swept away in the maelstrom of Stalin’s purges. We probably owed our survival to the lack of people familiar with the techniques of preservation, for before the last war there were no more than four people really skilled in those procedures. Thus when Vorobiov died in 1937, there were only three of us left, so that to have eliminated even one of us would have been to put Lenin’s corpse, the symbolic centre of Soviet power, in danger.”

It was chilling to read about the sudden disappearances of colleagues. What must it have been like to work during this time, when all of a sudden–all too often–you found out that some of your fellow employees and superiors were not going to come in that day? And likely never would again? Zbarsky learned to deal with it by keeping his mouth shut. Loose lips meant deportation to labour camps or execution. Professor Vorobiov died under mysterious circumstances. It is likely that he was denounced after a drunken episode at a dinner where he kissed Stalin–or from any of his other drunken rants critical of the regime. It did not matter that Vorobiov was the embalming team leader; Stalin found a way to liquidate him following an unnecessary operation.

As the German army advanced on Moscow in 1941, Lenin’s mausoleum was at risk. The decision was made to secretly transport the body to Tiumen in Siberia for the duration of the war. Zbarsky, his family and the embalming team travelled on the same train as Lenin. It wasn’t long before the secret was out.

The very last lines of the book reveal Zbarsky’s wishes:

“My second reflection is that while the preservation of Lenin’s corpse was a considerable scientific achievement, I cannot help believe that embalming is a barbaric and anachronistic practice, alien to the cultures of Western societies. That is why, despite the privileges I enjoyed during the years I spent in the shadow and the shelter of the mausoleum–generous salary, modern equipment and scarce materials to work with, as well as access to a wealth of scientific literature–I believe, speaking as a citizen, that Lenin should now be buried.”

This book, all too short at 215 pages, was exciting to read and provided a unique look into the science involved in long-term embalming. The text was printed in tiny type and the photo captions and page numbers were in an even smaller font. Sadly the quality of the photos was poor, but that could be due to the condition of their source originals.