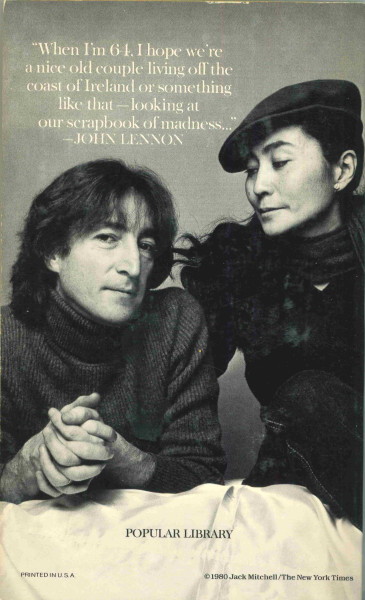 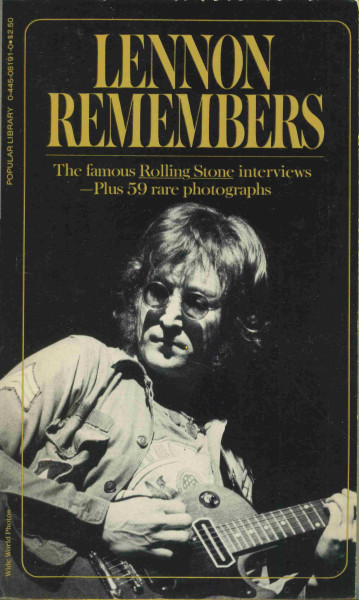 Back and front covers of the paperback edition I read, reprinted in 1981 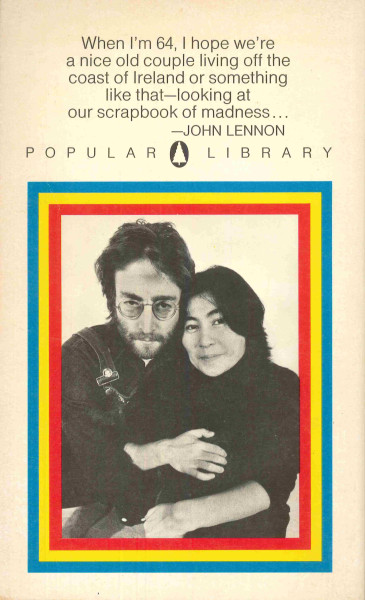 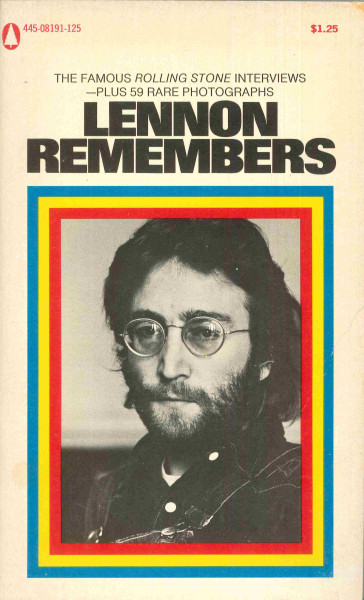 Back and front covers of an earlier edition

I picked up Lennon Remembers: The Rolling Stone Interviews by Jann Wenner in early 1981. This is a reprint of the original 1971 edition. I picked up an earlier edition, also pictured above, but I cannot be sure if it is an original in spite of its publication date of 1971. I picked that one up at a Beatles convention. The book chronicles the lengthy interviews Wenner had with Lennon in late 1970 which were serialized in two editions of Rolling Stone magazine in early 1971. The contents and Lennon quotes have gone down in history. These interviews exposed more about the insecure Lennon psyche than any other. In my forty years of Beatles fandom I had long known the contents of these interviews since they have been cited in countless Lennon biographies yet I had never read them all in one dose. That for me proved to be an exercise in patience. I base that remark on the transcript. It could have been edited to flow more smoothly, so that meaningless words were edited out and answer start-overs didn’t appear halfway down in John’s reply. I had to cast out what in my opinion was too much unnecessary language which only made me need to read entire paragraphs all over again. The transcripts were however not as bad as Andy Warhol’s a, but I still felt I had read each page twice before going on to the next.

John often couldn’t remember what Wenner attributed to him as saying, even when he quoted him in interviews from merely one year ago. John frequently refuted his own past statements, a point Wenner raised in the introduction. Thus the reader got the idea that John, by then thirty, was still finding himself and discovering new philosophies while discarding others as rubbish.

In December of 1970 John had just released his soul-baring album John Lennon/Plastic Ono Band and much of the interview was devoted to the making of the album and the songs on it. John praised the primal scream therapy he and Yoko underwent with Arthur Janov although he was not in that type of therapy any longer. Throughout the interview though John told of his fits of nervousness when going on stage or meeting important people. Thus during the Beatles years John must have suffered from stage fright and at the time of these interviews, still was. He took a lot of heat from friends in his inner circle when he blasted them during this interview: not just the expected target Paul McCartney, but also George Martin, George Harrison and Mick Jagger among others.

Yoko was alongside for much of the interview and it is thanks to her for guiding John’s train of thought and directing him back to Wenner’s original questions. At times John would start to answer a question with a long introduction, with the reader expecting him to phase into an answer, yet sometimes he’d never get there. Yoko would sometimes ask the question again or insert a prompt to get John back on topic. I believe that without Yoko’s involvement in the interview, Wenner might not have gotten the answers he was striving for and perhaps wouldn’t have gotten such candid replies if it was only him around doing the asking.

One minor point of confusion centred on the authorship of “I Want to Hold Your Hand”. Early in the interview John claimed that it was not a collaborative effort with Paul McCartney. Then in two separate instances over halfway through when Wenner wanted to discuss the Lennon/McCartney partnership John asserted that it was a joint effort.