Lesotho 1970: An African Coup under the Microscope 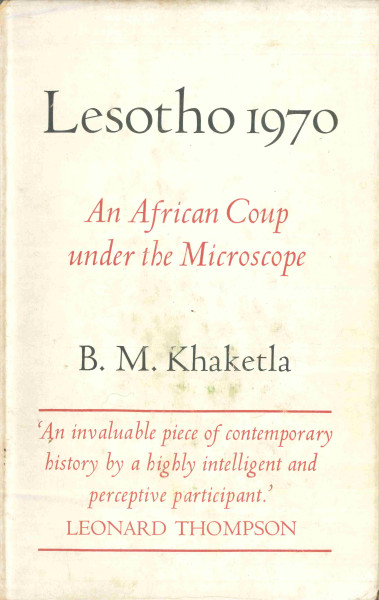 While I was in Cape Town waiting to travel to Tristan da Cunha I visited Clarke’s Bookshop, one of the leading second-hand stores specializing in Africana. I bought enough books to fill a collapsible bag, which I had brought along specifically for this purpose. I found many books on Lesotho, and I chose Lesotho 1970: An African Coup under the Microscope by B. M. Khaketla, which I read on my journey aboard the MV Edinburgh back to Cape Town. This was an academic read while a rapid page-turner at the same time. The reason I could not put this book down is likely because of the author’s personal involvement in the crisis. While Khaketla was not among those who planned the coup, as the founder of the opposition Marematlou Freedom Party, he definitely suffered its effects. Thus he provided a first-hand account of the political crisis. Lesotho 1970 was published one year after the coup, so this book described a situation still in progress.

Results from the 1970 election were showing that the Basutoland National Party, led by Prime Minister Leabua Jonathan, would lose to the Basutoland Congress Party, led by Ntsu Mokhehle. Unwilling to give up power–as he genuinely believed in a victory–Jonathan declared a state of emergency and suspended the constitution, citing voting irregularities, tampering with ballot boxes and the need to protect his citizens from the alleged Communist influences of Mokhehle. Khaketla by this time was serving as Privy Councillor to King Moshoeshoe II, the paramount chief who was extremely popular among the Lesotho people. Khaketla had a prime view at the goings-on within the monarchy as well as his own party.

Khaketla gave a history of the country from shortly before independence in 1966 to paint a picture of the political situation that led to the coup. A forensic account of the coup by a member of one of the victimized political parties could have been written with spite and histrionics. I did not find that attitude in Lesotho 1970. Khaketla reported that the voting irregularities prior to the election were committed by the governing party itself. You will not believe the extent to which Jonathan tried to ensure opposition candidates remained off the ballot. Candidates had to defy time as well as space in order to get their nomination papers in on time, if at all. After a state of emergency was declared, a wild west mentality overtook Lesotho. Jonathan claimed ignorance as thugs attacked his people, hacking them or setting them on fire. It was grisly to read about the Police Mobile Units and youth leagues marauding about the country on their reigns of terror. The suspension of the constitution and the courts gave these criminals–and you can be sure that members of Jonathan’s own government were in it as well–free licence to attack and arrest the opposition, ban the presses and arrest teachers:

“In the dark weeks that followed, the basest of human instincts were sanctified and went unchallenged by those who said they had embarked on this step in order to protect law, order and human decency.”

What I found so hard to believe is that the winning party, the Basutoland Congress Party, as well as the smaller parties who finished in distant positions, apparently let Prime Minister Jonathan get away with the coup. Granted, he jailed Mokhehle and sent the king into exile, but why didn’t the population revolt against the obstruction of genuine election results? Wouldn’t other citizens, cheated out of their chosen leader, take to the streets in rebellion and protest? Maybe in an Internet wired world of the twenty-first century, but not in a mountainous isolated landlocked kingdom. Khaketla wrote about the night the election results came in and how Jonathan had a firm hand on the media to control the dissemination of information. Complete election results were never revealed, and broadcasts stopped just before the ruling party slipped to second place in the polls. It is perhaps only in retrospect that we can shake our fingers at the opposition parties and yell at them for not getting up and doing something.

Jonathan attempted to unite the growing opposition by holding joint talks with all parties, but only paid them lip service. As I read about these talks, it seemed as though Jonathan was offering the other parties only pennies out of the hundreds he had stolen from them.

Jonathan had a firm hand on the world stage and used the premise of famine caused by drought to bring in international aid that was suspended by the UK in protest of the country’s illegitimate election results. Khaketla wrote this book in 1971 yet Jonathan would hold onto power for another fifteen years, run out of office by–surprise, surprise–a coup in 1986.