Lingo: Around Europe in Sixty Languages 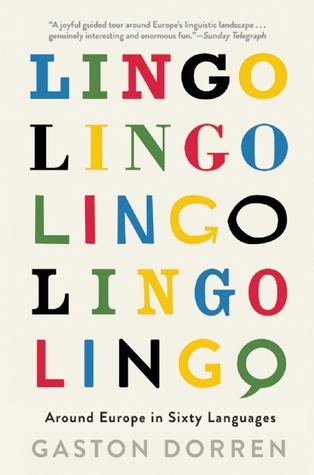 I enjoyed Lingo: Around Europe in Sixty Languages by Gaston Dorren. In a little under three hundred pages Dorren profiled sixty European languages. That’s not all the languages on the continent, of course, but he did cover some of my favourites. This book was originally published in Dutch and was translated by Alison Edwards. I saw the German translation when I was in Berlin last week. Some of the language chapters were written by other authors, and I wish Jenny Audring, who wrote the chapter on Finnish, had let a native speaker or Finnish linguist read it first. She made one error about Finnish vowel length. More to come about that.

I generally avoid books like this, because three to five pages about a language is not going to provide me with any knowledge I didn’t already know. For an armchair linguist such as myself, I like to think I know a bit already about European languages, how they got there, which language family they are from and who speaks them. My own language studies have taken me into the world of severely endangered European languages as well, so I know a lot already about Romansch, Breton and the Sami idioms. I was thus glad to read that the object of this book wasn’t just to tell a very concise history of each of these languages (and in many cases, he didn’t do that at all). Instead, Dorren wrote about quirky moments from a language’s history, or about a certain linguistic phenomenon, or how a language developed its written form, or about anything else that may have caught his fancy. He centred on one specific episode and made the reader laugh while reading about it.

Indeed, I took a liberal amount of notes over the course of my reading, both for further items of study as well as for citing in this review. Dorren asked the question: What does Greek think about non-Greeks inventing terms using Greek roots that would not, strictly speaking, form a legitimate Greek structure? How do foreign-built compounds fit into the modern Greek language? Do Greeks laugh at them or roll their eyes as they use new terms such as ontogenesis and android? These are, in effect, “loanwords in Greek, albeit ones of Greek origin”. Turns out that the Greeks treat these words as if they were home-grown. I never would have thought that five pages on the Greek language would have included a discussion of this.

Audring had me laughing with her remark about the length of Finnish words. Words that are so long need a lot of paper to write them down on,

“But a nation with such an abundance of forests is hardly short of paper.”

Where Audring erred is in her confusion regarding the meaning of vowel length. Finnish employs vowels that are pronounced longer (meaning that they are pronounced for a longer duration) than other vowels. This difference in length of pronunciation can affect the meaning of a word. For example, Toronton means “of Toronto; Toronto’s” whereas if you lengthen the time you enunciate the final vowel, and write it accordingly with a double O, such as Torontoon, that means “to(wards) Toronto; in the direction of Toronto”. The O-sound in the final syllable of Toronton is a short O. The O-sound in the final syllable of Torontoon is a long O. Audring confuses “long” and “short” with its grade-school English phonics class context, where she calls the vowel sounds in words such as foe and though as “long” yet the vowel sound in the word swap as “short”. They are not comparable as they are totally different vowel sounds. The issue of vowel length in a Finnish context cannot be compared with the “cod/code” issue of vowel length (or shortness) in an English context.

English does have long vowels and short vowels as does Finnish, yet native English speakers don’t even realize it. Take for example the two pairs coat and code and cot and cod. In the examples ending with the T-sound, the vowel sound is pronounced in a shorter duration than the vowel sound in the words ending with the D-sound. Say the two words in each pair over and over again and you will hear that you say the O-sound a little bit longer when it is followed by the voiced consonant, the D. That’s how English works, or specifically, how English is spoken in my region of Canada: all vowels are lengthened before voiced consonants.

The chapter on Finnish (chapter 54) was followed by Faroese, which was chapter 55. So for the first fifty-three of sixty chapters I was okay. Dorren impressed me with his linguistic tidbits and he whet my appetite for conducting further research. However he ruined my otherwise faultless impression of his book (Audring’s Finnish glitch notwithstanding) by his wholly dismissive and insulting opinion of the Faroese language and those who wish to study it. Why should one study Faroese anyway, when “you could chat to the locals in the somewhat more useful Danish language. All Faroese speak it and, to cap it off, with much clearer accents than the Danes.” The nerve! I have just returned from a holiday in the Faroe Islands and whenever and wherever I travel, I always try to converse with the locals. My Faroese is quite limited, yet the smiles and looks of appreciation I received when I greeted people and thanked them in their own language! Not in English and definitely not in Danish. I spoke with them as a foreigner in their own language (or, admittedly, tried to) and they loved it. Dorren wrote admirably about the Faroese language’s case system and the adoption of the written Faroese language, then dismissed all efforts to learn the language:

“Oh, whatever. Learn Sorbian or Basque instead. They’ll be of more use to you.”

Dorren covered certain endangered languages and their varying degrees of success at revival. Irish, for example, seems to be on the right track and is gaining speakers who are motivated to use it outside of the classroom. Dorren writes:

“Of the 90,000 or so people for whom Irish is part of their daily lives, an increasing number are urban, highly educated second-language speakers, and their Irish is, well, just not quite the same as the old language. Some politely call it urban Irish. Others mock it as ‘Gaelscoil’ (‘school’), ‘broken’ or even ‘pidgin’ Irish.
“The differences are quite significant. Linguist Brian Ó Broin observed a few years ago that urban second-language speakers had trouble understanding native speakers, whereas native, mostly rural speakers found the Irish of urbanites jarring on the ear.”

In the end, though, Dorren wonders if urban Irish will supplant the purer rural Irish.

At the end of every chapter Dorren listed some words from each language that have been adopted into English. For French and Italian there are hundreds and hundreds of examples. For some languages, such as Monégasque, there are none. He also highlighted words that existed in each language that perhaps could find a use in English (lacunae). My favourite was the Hungarian example madárlátta, which means “food taken for an outing but brought back home uneaten”.

In the acknowledgements I found it sad that Dorren credited a proofreader who obviously missed a very unmissable name. Robert de Kock is thanked by Dorren for providing help about the Basque language, yet in the following paragraph (on the same page) he is referred to as de Cock. Which is it?