Luxembourg: The Clog-Shaped Duchy: A Chronological History of Luxembourg from the Celts to the Present Day 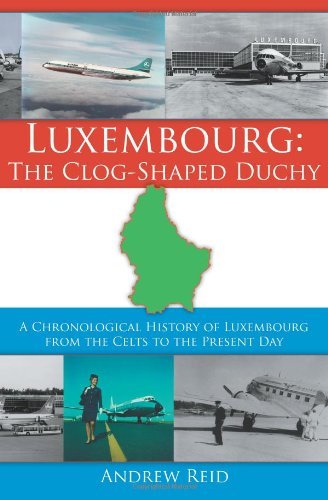 When I visited Luxembourg for the first time in the summer of 2013 of course I went nuts in the local bookstores. I wrote all about my purchases here. One title that I saw in the capital city’s largest bookstore, Ernster, was Luxembourg: The Clog-Shaped Duchy: A Chronological History of Luxembourg from the Celts to the Present Day by Andrew Reid. It was an American import so naturally its price was far more expensive than what I would pay back home, so I took note of it and ordered it once I got back. This book was published in 2005 by AuthorHouse, a self-publishing company. I have read a number of self-published books this year, all but one of them being dreadful and none of them properly edited. The same poor state of editorial affairs afflicts Luxembourg. Spelling errors are the main gaffe and while I refrained from quoting each and every one of them, I could not let two errors escape the scrutiny of my blue pencil. Reid referred to “Philippe the Good of Burgundy” yet a mere two lines later wrote “Philip the Good of Burgundy”. How can the reader not notice this? And Reid cannot make up his mind on how to spell the name of the major river that flows through the country, the Pétrusse. He alternates between Pétreusse and Pétreuse yet never by its standard French spelling.

The cover is attractive but if you judged a book by its cover you’d think this was a book about Luxair, the national airline. Both the front and back covers are adorned with airplane pictures. I know that it is a sign of international prestige for a country–especially a small one–to be rich and cosmopolitan enough to warrant its own carrier, but one airplane photo would have sufficed. Why not include a photo of the current Grand Duke, Henri, or the beloved late Grand Duchess Charlotte? It was a disappointment that this book contained no photos, maps or index. Reid devoted a paragraph to describing the spectacular Grand Duchess Charlotte Bridge, yet unfortunately never shows it. That would have made an excellent choice of photo for the front cover instead of yet another airplane shot. Here is a shot I took from my 2013 trip: 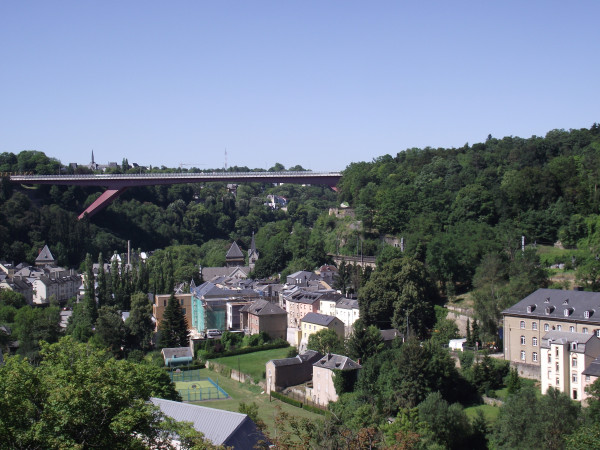 Reid described the multiple partitions of Luxembourg in the aftermath of wars and I would have loved to see how the country evolved to its present state. Being surrounded by three powerhouse neighbours gave it a piece in every pie. If you were to drop in to Luxembourg today you could be forgiven for not knowing where you were or what language you were hearing. The modern historical record reflects this triumvirate mentality:

“In 1884 a statue to King William II of the Netherlands and Grand Duke of Luxembourg was erected in the Place Guillaume, built by a French artist. This again underscored the peculiarity of the Grand Duchy with a foreign monarch honoured in a capital city where most street names are in French.”

I cannot criticize too much the state in which this history was presented. Reid states on the cover that it is “chronological” and I certainly had a good thumb-through while looking at this book in Luxembourg City. However in the beginning the book goes through vast chunks of Luxembourgish history a paragraph at a time. It makes for a very boring read where the first sentence of each new paragraph begins with a date and an itemized list of what happened. I didn’t start to enjoy the book until the chapters on and between both World Wars. Reid went into much more detail and it was easier to immerse myself in the history instead of feeling like an outsider merely reading facts. I knew that the Grand Ducal family had gone into exile during the Nazi invasion yet did not know that Grand Duchess Charlotte and her family settled in Montreal. She set up a government in exile in November 1940.

Luxembourg is in central Europe bordered by France, Belgium and Germany, and is thus at a linguistic crossroads. French and German are official languages yet Lëtzebuergesch has national status. I enjoyed the paragraphs on the evolution of Lëtzebuergesch and the movement for a standard orthography. If this book was not a chronological history then there would likely have been a separate chapter on Lëtzebuergesch. Instead of this, I had to read bits and pieces about the language throughout the text. No index made knitting the linguistic history together difficult.

I did not know that General George S. Patton is buried at the Luxembourg American Cemetery. I would have tried to visit his grave in 2013 had I known this. Also, photographer Edward Steichen was born in Luxembourg, but moved with his family to the US when he was still an infant.