Mark and I took a Silja Line ferry from Turku to Stockholm. We got a cabin for our eleven-hour crossing of the Gulf of Bothnia. I had taken a Gravol tablet two hours prior to departure to ensure I didn’t feel queasy during the crossing, yet if I managed to keep my breakfast in my stomach during that rocky three-hour trip to Grímsey four years ago, my intestinal fortitude could certainly withstand this journey. One side effect of Gravol is drowsiness; I certainly felt extremely tired at the start of our trip and my weighty legs trudged along. We took photos of Turku as we left and of the Swedish flag unfurled in the stern. 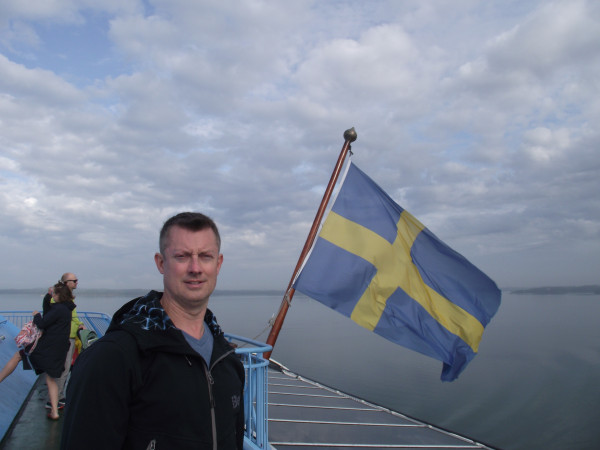 There was free hot water available in one of the cafés and I took advantage twice so that I could make cups of instant coffee (which I had brought with me) to perk up. The water was dispensed in large urns and was not that hot.

We loved looking at the islands in the Turku archipelago which seemed too close for a comfortable passage by such a large vessel. At times people on these islands, or islets, waved at us passing by. I had taken this trip twice before: once for an overnight passage in 1999 and the second time in January of 2002. Thus a morning summer passage was an entirely new experience for me, and it was a first-time experience at any time of the year for Mark. 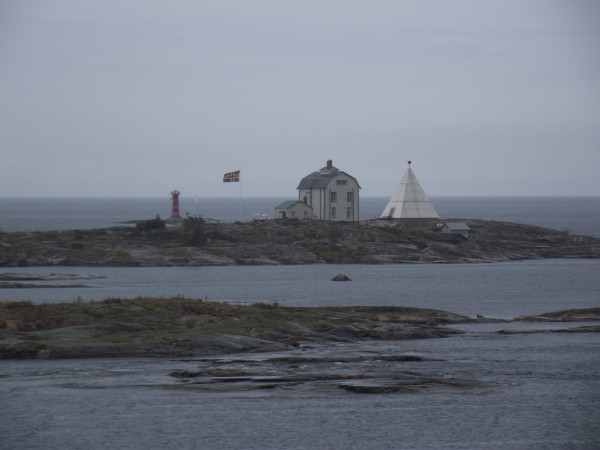 It was sunny yet at sea we had the foreknowledge to wear pants and a jacket because it was windy at times and we learned where to stand at the stern where the fans let out a gush of hot air.

We checked out the stores on board and Mark tried on two T-shirts at the store called Fashion Street. They looked very smart on him and were a good price; he bought both of them. The other stores sold the usual duty free drink and food (the priority here being drink over food) and many passengers left the ship with cheap Estonian beer.

We ate the lunch we had brought along and played Scrabble on a restaurant table. We always watched the islands pass by and we noticed the growing urban setting. Mark said that we must be approaching Mariehamn in the Åland Islands. We docked on the peninsula’s west coast and I recognized the ship Pommern, anchored nearby. I remembered many of the buildings from my 2002 trip to Åland. 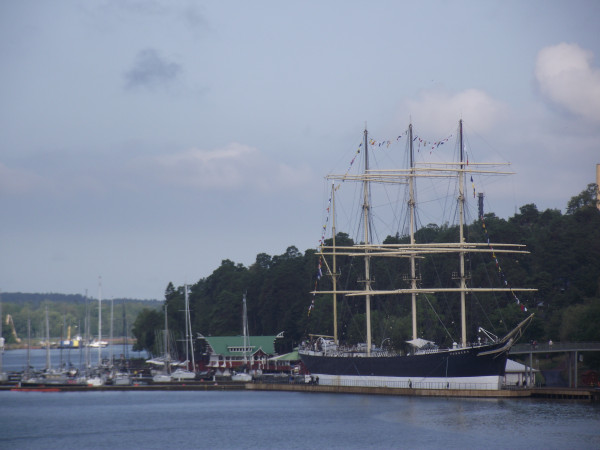 We noticed that when boarding in Turku there weren’t as many passengers as we might have expected, at least when compared to my two previous crossings. Since I took a nighttime passage to Stockholm twenty years ago I definitely noticed the difference. Many people prefer to have an evening party at sea and that’s why there are so many stages and dance floors on the ship. The disco didn’t even open till midnight, so we knew what kind of passengers the ship attracts. I say all this because while we didn’t see many passengers once the ship set off, we sure saw a whole lot of them disembarking at Mariehamn. Where did they all come from? I suppose the departing passengers were vacationing Finns as I recalled hearing some of them on board speaking Finnish—the Ålands are unilingually Swedish-speaking—so they wouldn’t be islanders going back home. Some passengers also boarded at Mariehamn. Our reflection in the terminal building at Mariehamn

After this stop the Åland archipelago thinned out and we were at “open sea” for a short time before the Stockholm archipelago of Sweden crept up on us. Far more urban than the Finnish archipelagos of Turku and Åland, the homes we saw were multi-storeyed mansions. 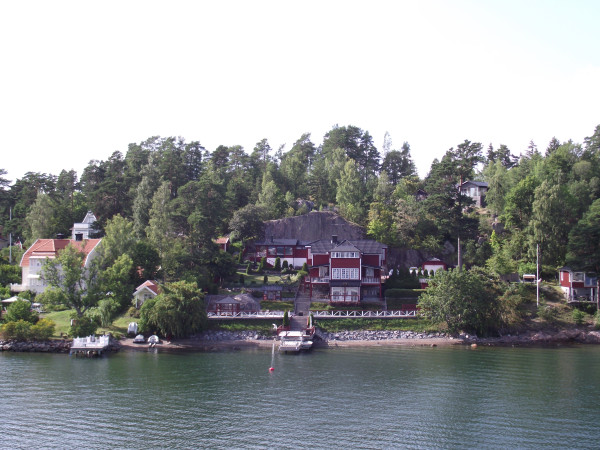 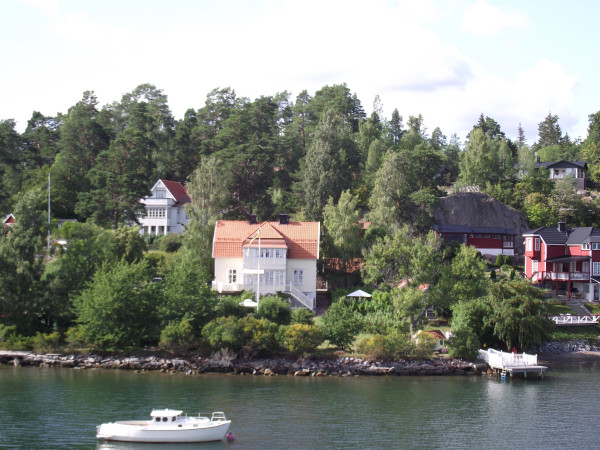 We stood on the sixth deck approaching the harbour in Stockholm. Next to us was a young man, Ernesto (I think he was 23) and his older brother, David. They were talking to some passengers about a wide variety of topics, including religion. The brothers and one passenger, who shared the same name, David, as the older brother, were having a civil argument about atheism versus Christianity. The other David was a Christian from Syria, who talked about being persecuted as a religious minority in that country.

The younger brother, Ernesto, had been flirting with a young woman and from what I could overhear, the flirting was mutual. When you have a young group of people immediately to your right on the outer deck, it was easy to overhear their conversation. Since we had already arrived at Stockholm harbour, everyone else, including Mark, both Davids and all other passengers, had lined up at the deck exit or returned to the cabins to grab luggage to get ready to disembark.

What happened next was right out of a TV show and I could not believe what I was witnessing. It was only me, Ernesto, this young woman and a couple passengers out on deck. Ernesto had been saying to this young woman that he was fit and a strong swimmer. From the look of his physique I could tell he was telling the truth. He told the woman that he was going to jump into the water. I didn’t believe him, of course; I thought this was just male bravado. The woman doubted him too. No one took him seriously. Who would? He kept on saying that he was going to jump, yet the woman tried to convince him otherwise. I recall her saying that he could kill himself, that a jump from that high would be like jumping on glass.

Yet the next thing he did made us worry and sent a panic through our veins. Ernesto stripped to his underwear and this really freaked the woman out. I ran back inside the ship to tell Mark that a guy was stripped to his underwear threatening to jump off. Mark ran out on deck and saw Ernesto already in the water. He must have jumped the moment I ran back inside the ship. I ran back out on deck and saw this tiny head bobbing in the water, with a life saver floating next to him. From what we both saw, we have to admit that Ernesto was a fit swimmer and was happily treading water while yelling at us above. A man with a baby in a stroller yelled in Swedish that there was an emergency, “Man överbord!” and the ship’s crew came to clear everybody away from the deck entrance. Mark and I were the few witnesses who saw Ernesto in the water and knew the reason for the sudden need for security personnel, yet their sweeping approach and barring of the deck entrance made everyone else curious. People came to the scene of the action wondering what all the fuss was about. Ernesto’s family was summoned and they pushed their way past the crew to see their son or brother far down in the water. Ernesto’s mother screamed his name in hysterics; it was haunting to hear a mother scream for the life of her child. She and her husband and other son David were calmed by security and stood by the deck railing the whole time.

Mark peeked out from inside the ship to see if any rescue was underway and saw a small boat approach Ernesto. I was shaking from head to toe. My legs were wobbling as I walked off the ship. Mark and I relived the moments leading up to Ernesto’s daring jump—-flirtatious behaviour coupled with drinking—-and we were amazed that if Ernesto was indeed in some state of drunkenness that he had the wits to tread water after such a dive. We wondered what the consequences would be: would he be arrested for mischief or other such behaviour? Would he be allowed to leave the ship or would he have to go back to Finland? I checked the Swedish press on-line over the next several days for a story, yet found nothing. Maybe this wasn’t newsworthy in Sweden, or perhaps no one would think of contacting the press about it. You definitely would have heard about this on TV or read about it in the news even in Canada if Ernesto had jumped while we were still at sea.

After we disembarked we were relieved to find that the entire route from ship to shore was on a series of zigzagging covered jetways with no stairs involved. It was boiling hot inside them. The signage sent us both in the wrong direction and we had to backtrack half a kilometre to the street exit by the nearest subway station.

Mark and I each bought a seven-day transit pass and are so glad we did. We used it for the subway mostly, and trams and buses. After checking in to our hostel we found Thongwiset, a Thai restaurant in a shoebox on Hornsgatan. They were just closing but could accommodate us if we could finish our dinner by 21:30. With me such a slow eater, I didn’t want to see us turfed out with half my dinner still on my plate so I made it a point to eat quickly. Then we did some grocery shopping at a nearby Coop store.

What a way to commemorate Mark’s first visit to Sweden: with a man overboard!