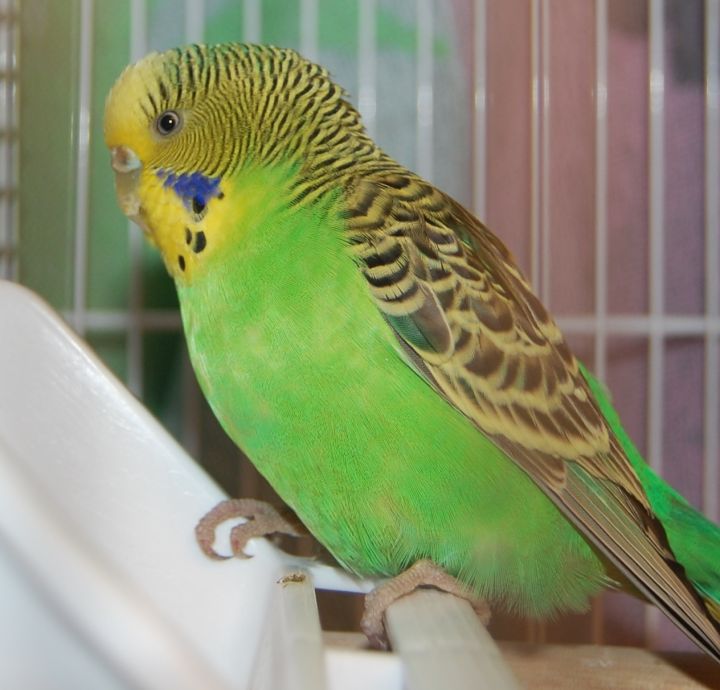 Mango, my last budgie, died over the weekend. After Mark and I came home from a three-day trip to Kitchener, the first thing I did when I entered the house was look for her in the cage. When I couldn’t find her, I feared that she must be lost somewhere, perhaps upstairs. I embarked on finding her, but didn’t need to look long, for I found her on the floor at my entrance near the garage door. She didn’t appear to be sick before we left on Saturday morning. After having budgies for thirty-one years I am perceptive of their behaviour when it is out of the ordinary. There were at least two times when a compromised behaviour foreshadowed the death within a week of two of my budgies. I just knew that their end was near (and I’m not talking about Kakapo’s demise last year either). It must stem from the knowledge imparted on my visits to the bird doctors at The Links Road Animal and Bird Clinic.

I could not understand what might have happened to Mango, but in the two days since I discovered her, I have considered some possibilities. They might be all wrong while I grasp at the straws of personal blame, or Mango may have just died of old age. I adopted her three years ago when she was already a mature bird and I do not know how old she was.

She must have flown around my kitchen or walked there, as I found dried poop on the floor near the fridge and two clumps under the kitchen table. I don’t believe a bird would stay that long under the table long enough to poop as much as she did unless she was stuck there–like at night. My kitchen table is rather small; it’s a circle with two ends folded down so it is more like a rectangle. I wonder if Mango was scared by the winds on Sunday night. I moved her cage away from the living room window as I made room for my Christmas tree (which I had only set up on Friday night) so she was closer to the kitchen but further from any noise outside. Since I did not leave the ceiling light on for her when I left Saturday morning, she could have become disoriented if she flew into the kitchen. She would have been surrounded by the dark while walking around the floor, since she wouldn’t have had the outdoor streetlights to guide her back. A budgie that is scared and trapped tends to poop more often.

But what puzzles me is that I found her by my entrance, which even in a dark house has the streetlights in a clear sightline. She had pooped here too. How come she couldn’t find her way back to her cage? She couldn’t have been “trapped” if I found her where she had a way out. I have often wondered what mischief my birds get into when I am away. The times when I have been away for extended periods–studying in Finland for the entire summer of 2000, or extended holidays to isolated south Atlantic islands–I have people come over to care for my birds. They may not come every day, but a caregiver has never told me that any of my budgies had gone missing. Once though about twenty years ago I was heartbroken to come home from vacation to the news from my mother that one of my birds had died. Mom did the right thing by not telling me this news while I was away. She knew that news would ruin my trip. A natural death could happen at any time and perhaps that’s what happened to Mango. Still, it doesn’t ease the pain when I realize that it was cold this past weekend and I didn’t leave the heat on. Mango died on a freezing cold floor. I picked her up and her wings were folded against her body, so it didn’t appear as if she had been injured. She died in the same position as my other budgies, except they were either in their cage or, as in Kakapo’s case, just outside of it. How did she die? It is too painful to go over her last moments, perhaps in the dark on a cold floor. I will never know and the unknown tends to bring out the worst case scenarios. I have to consider that she was a mature bird when I adopted her and may have been as old as Kakapo was when she died (at fourteen).

I have had budgies since 1989. After Kakapo died a little more than a year ago, I told myself that Mango would be my last bird. She lived a lonely life for a year. I do not know what her life was like before I adopted her. She may have been a solitary budgie in her former life or maybe she had many bird friends. But it often saddened me to see her in her cage alone, all the while knowing that I had no intention of giving her another companion. Nevertheless I had hoped to have had many more years with her.

Already this morning I had to adjust to a life without birds. Before I feed myself, I feed my birds. Before I make coffee, I change their water. Once I get home, before I do anything for myself (except go to the bathroom–with an apology to the birds as I rush downstairs to the en suite), I feed them. Even if I got mail or picked up a package waiting at my front door, I always attended to the birds first, and opened my mail later. Each morning I would open the blinds to let the sunlight in. I was so sad yesterday morning that my living room mirrored my gloom. There was no need to open the blinds till just before I left for work (and that was at 1:00 p.m.). I never left interior doors open, for fear that lost or inquisitive budgies might explore rooms and never find their way back. Bathroom doors always stayed closed, since they have big mirrors which would disorient a bird to no end. And whenever I opened my front door to my house, I always–for eighteen years–cracked it open to ensure the birds weren’t frolicking around my entrance. I have never lost a bird, and never even found a bird taking a walk in my entrance, but for eighteen years I was afraid that a bird might escape if I swung open my front door before taking a look around first through a narrow crack. And whenever people came over to drop stuff off or to make a speedy visit, I always shut the door behind them. That front door never stood open. This will be a hard habit to break. I don’t know if I will be able to cope looking at my door left wide open. Whenever the front door needed to be open for an extended period of time I had the foresight to keep the birds locked in their cage. Thus when I had my bed delivered, or my old sofa taken out, or my extra fridge and stove removed, the birds stayed safely locked inside while the workers delicately manipulated the heavy furniture or appliances out of my house. When I got home from work last night around 9:30 I was unexpectedly overcome with tears as I realized there was no need to inch the door open as I entered. I swung the door open and started crying. No more rushing in to take a look at my birds before I even took my shoes off. The house was empty and silent.

I cleaned the birdcage every Tuesday morning. If for any reason I couldn’t do it in the morning, I did it at night, when I got home from work at 9:30. It was a pattern I believe my birds came to expect. I lined the bottom of the cage with old dish towels, five of them in fact. I put newspaper on top of the towels. I put towels there because I didn’t want the birds to hop to the bottom of their cage and slam their delicate feet on the hard surface. The top towel especially would get a thin line of poop, as the newspaper that I cut folded back a little. I would always shake out the large towel I cleaned the cage on. It would get covered in seed husks and for eighteen years I must have been a queer sight to my neighbours as I stood on my front steps flapping a beach towel into the air. Every Monday I would do a “towel load”. Being the language nerd that I am I pronounced that phrase with a thick and long L sound, like “towelllload”. I reserved Monday, usually at night after my evening visit to the Y, to wash all the week’s towels, from bird towels to dish towels and shower towels and dishcloths. Yesterday morning I did not have to clean the cage, so I went grocery shopping instead. I still need to clean the cage one final time, as I will have to put it away. But it will be heartbreaking to do so, as I clean and pack up my birds’ home.

I had developed my own special saying to refer to my budgies: they were my “bebbez” (babies) or “my little bebbez”. When Kakapo died last year I tried to resort to the singular but after a week gave up and resumed using the plural to refer to Mango alone.

Perhaps in the last weekend of Mango’s life she perched on my Christmas tree. I had set it up on Friday night but hadn’t started decorating it yet. She loved to perch in my red tree, as she did in 2017: 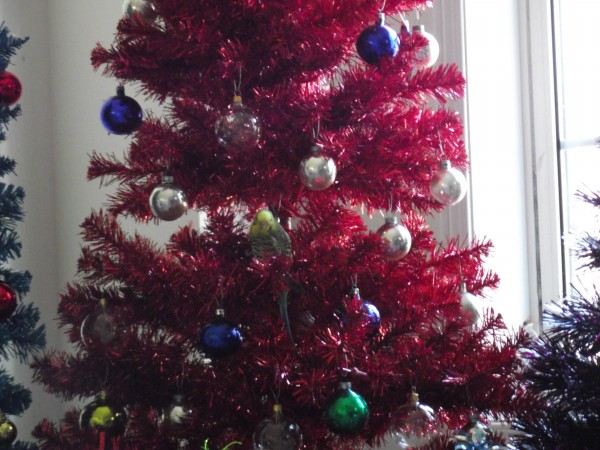 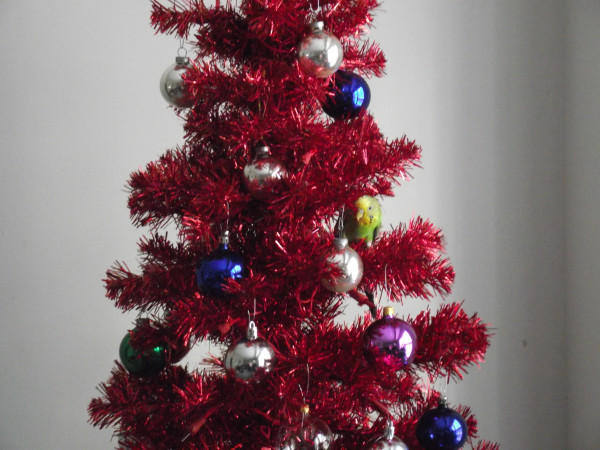 My friend Rachel took the video of Mango and Kakapo when she looked after the bebbez in February 2019:

and she also took this picture of her: This marks the end of a major part of my life. I find this hard to type without crying, but I will probably not have birds again.