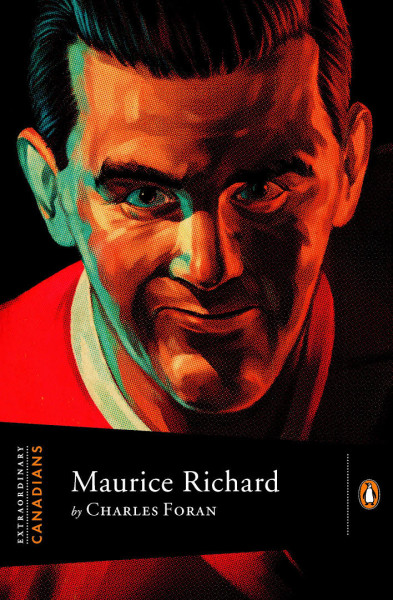 Maurice Richard by Charles Foran is part of Penguin Canada’s Extraordinary Canadians series. A short biography contained in a small book, this can easily be read in a day. I knew that “Rocket” Richard was a legendary Montreal Canadiens hockey hero but nothing more. Foran covered his subject from life to death and made it a can’t-put-down read, a teaser for the reader to find a longer work. When Richard took to the ice as a professional in the early forties, hockey was already a brutal sport. I knew the game was more violent decades ago, but not to such a degree as this. The players were wholly unprotected by their hockey uniforms and protective clothing was nonexistent. Flying pucks regularly took out teeth and broke cheekbones, while roughhousing and body-slamming broke bones and ended players’ careers. I expected someone would be taken off the ice on a stretcher in every game Richard played:

“‘If you know nothing else about the time I played,’ Richard would later say of this period, ‘know how violent the game was.'”

NHL players from the forties and fifties did not earn anything comparable to what players make today. Richard often had to work during the off-season to make ends meet. As the father of seven children he couldn’t afford to blow his small salary on luxuries, so he and his beloved wife Lucille lived humbly, always remaining in Montreal. This was one of many qualities that endeared Richard to the Québécois, and cemented his status as living legend.

Running throughout this short biography was the sense that Richard himself was unaware of his own magnitude as a symbol of the struggle of the Québécois living within Canada. Hugh MacLennan wrote:

“he has imperceptibly become the focus of the persecution anxieties latent in a minority people. Not even the fact that he is loved and admired almost equally by English-speaking Montrealers can modify the profound self-identification of loyal Canadiens with this singular man.”

Richard “has the status with some people in Quebec not that much below that of a tribal God, and I doubt if even he realizes how much of what he stands for in the public mind is only indirectly connected with the game he plays.”

You will get teary-eyed as you read about the eight-minute standing ovation Richard received when he made an appearance on the ice prior to the final Canadiens game played at the Montreal Forum in March 1996. At the age of 74 he stood before the full house in his #9 Canadiens jersey and was overwhelmed by all the cheers and applause. He could only manage a slight smile and mouthed “thank-you” in English as the standing ovation would not let up. One can watch clips of this ovation on YouTube and what Foran and others wrote is accurate: by his reaction, Richard truly had no sense of his importance in hockey or what he represented to the Québécois in history. Such a humble man living his life among the people at the height of his stardom, he never let fame get to his head.

Richard was never political and did not enter the Quebec referendum debate. André Laurendeau, writer at Le Devoir, wrote:

“French-Canadian nationalism seems to have taken refuge in hockey.”

This would apply in the sense of strengthening Québécois pride. At a time when the Québécois felt like second-class citizens within Canada, when their language rights were being trampled upon in Montreal, Richard, who spoke only French at first, was the hero the entire country envied. His city and province were reborn as superstar destinations while the man himself was unfazed by all the fame and adulation.

At only 166 pages, this biography was saturated with a wealth of information. Every page was loaded and it made for a truly exciting and fascinating read about one of the greatest hockey players of all time.