Mauve: How One Man Invented a Colour that Changed the World 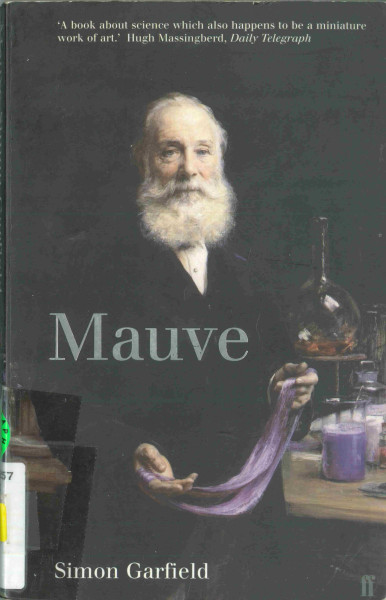 Before he wrote about maps and fonts, Simon Garfield wrote about dyes, mauve especially. Mauve: How One Man Invented a Colour that Changed the World was a joy to read. I should know this by now about Simon Garfield. Yet who would have thought that anyone could have made a book about dyes exciting? I read half of this book in one sitting (okay, I was on a plane en route to Fort Lauderdale at the time). Natural dyes have been around for centuries, yet the first mass-produced artificial dye wasn’t a primary red or blue, but in fact mauve. Why mauve?

William Perkin was a young British chemist who liked to experiment. It was during one such lab trial in an attempt to synthesize quinine in 1856 that he came upon a mauve residue. Perkin, at only eighteen years of age, had discovered a way to synthesize a colour using coal tar. The light purple that he produced was a hit all over Europe:

“And then two things happened to change his life. Queen Victoria wore mauve to her daughter’s wedding; and Empress Eugénie, the single most influential woman in the world of fashion, decided that mauve was a colour that matched her eyes.”

And so the fashion trend raged. Garfield included many vibrant photos in a colorful insert, showing the fashions of the times as well as Perkin’s earliest dyes. One of the photo captions said:

“An object of ridicule, an object of pride: gaudy, fugitive and poisonous, but the new colours proved irresistible to fashionable Paris and London.”

Poisonous? Arsenic was used in the creation of the dyes and while it remained entirely safe on dry fabric, once the wearer perspired or got caught in the rain, the toxicity became manifest. Skin irritations were widespread and even fatalities occurred. Tests were conducted on the safety of the dyes yet the various tests produced alarmingly contrasting results. It all depended on who conducted the tests, of course. Nevertheless, the official verdict was inconclusive on the dyes’ degree of toxicity. Factories in the mid-nineteenth century also risked polluting the water with their toxic discharge; Garfield wrote about wells which had become contaminated and the lawsuits that ensued against the companies.

Garfield could make a book about the history of the first synthetic dye a can’t-put-down read. Humour always makes a book a page-turner and the early history of dye experimentation was a hazard waiting to happen:

“‘The nitration of benzene is not, of course, a process free from all danger,’ Laurence Morris noted subsequently, ‘and in those early, groping stages of manufacture it is a miracle that Perkin did not blow himself and Greenford Green to pieces.'”

A major part of Mauve was Perkin’s battle with patents and dealing with foreign companies who produced inferior copycat dyes, or companies that used his breakthroughs and improved upon them. Perkin found that he could not keep up with the dyeworks on the European continent, and instead of battling with them in court over patent violations, the father of synthetic dyes sold his company to a competitor. This did not seem to irk Perkin; he was happy to let others reap the profits while he kept to his small lab working on his own projects.

It would have surprised Perkin to learn that his experiments with dyes led to many breakthroughs in the field of medicine. Dyes are now used regularly to locate microbes and in exploratory tests. Chemotherapy owes its existence to dyes. The development of photographs onto paper is also based on dye science. Garfield made a case throughout Mauve to celebrate Perkin and give him the credit he deserved as the founding father of so many scientific breakthroughs. In the 160 years since the discovery of mauve, science has forgotten Perkin and despite the recognition he received in a 1906 golden anniversary commemoration and posthumously in a smaller remembrance on the mauve centenary, Perkin seems to be unknown to the scientific community of the twenty-first century. I was moved by the final paragraphs of Mauve, where Garfield, after unsuccessful attempts to find Perkin’s gravesite, was contacted by Wendy Blewden. Blewden was Perkin’s great-great-granddaughter, and knew where his grave was. The two shared an afternoon sharing stories and Garfield got to see many of the great scientist’s personal possessions.